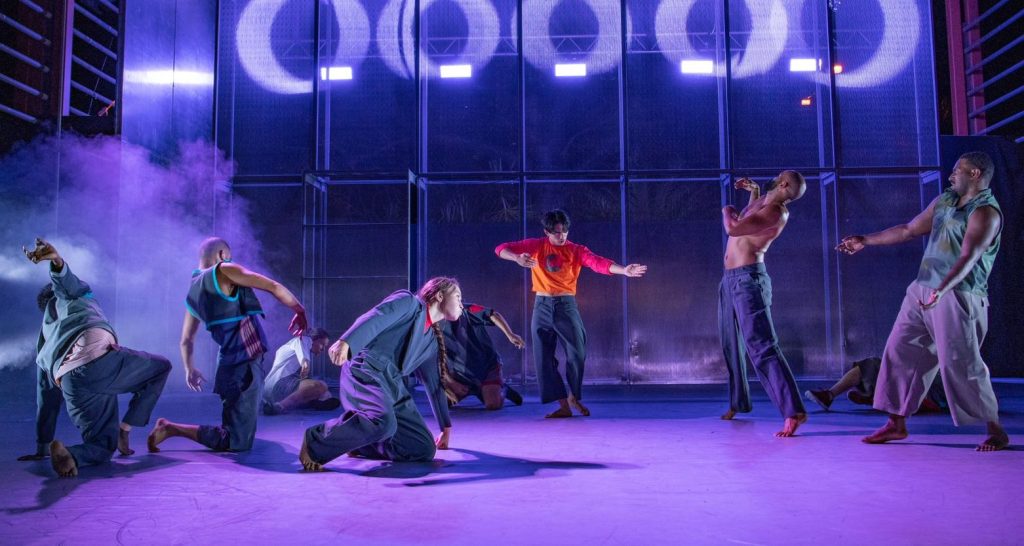 ‘The bravery of the physical theatre and intensity of emotions expressed by all the dancers do not waver through the performance.’ Photo by Abby Murray.

It is a challenge to reduce into words the impact the dance piece Jurrungu Ngan-ga [Straight Talk] has. At times searingly painful to watch, at other times supremely beautiful, Jurrungu Ngan-ga is an hour and half of visceral embodied experience of what it is like to be treated with inhumanity by the carceral state. As the dancers explore Indigenous and refugee stories of humiliation and torture in prisons and detention centres at the hands of the Australian government, we are invited to simultaneously consider the power of their joy and ‘hope’.

Mariame Kaba, who has written extensively on abolishing the carceral state says that ‘hope is a discipline’. We must be able to hope, to imagine a humane, compassionate state in order to be able to transcend an iniquitous one. In telling stories through dance and dialogue, the dance company Marrugeku can move audiences to believe in the power of love and the human spirit to transcend atrocities.

The piece opens with Emmanuel James Brown, dancing across the stage. His presence is galvanising, like the wind is moving through him as he waves his arms and pivots on his heel. The echoey half-light and natural soundtrack (with dingoes howling, crickets glistening and breeze swirling through leaves) enhanced the beauty. Kudos to Sam Serruys, Rhyan Clapham (aka DOBBY) and Paul Charlier for music and Damien Cooper for lighting. Brown is surrounded by tall, steel-coloured walls, a piece of set that stays for the duration of the performance, a claustrophobic reminder of confinement.

He is joined by other dancers, who move with automatic abandon, gazing into the audience with vast eyes and exhaling to propel themselves across the stage. Troubled industrial sounds, nature sounds and a live CCTV projection appears on the steel wall. The dancers progress into lion-like pacing, punctuated with juddery motions, replicating travelling in a police van. Dogs bark and sirens sound on the track as dancer Chandler Connell falls to the floor and splutters ‘I can’t breathe…’ Lying prostrate, with his hands invisibly bound behind his back, this is a chilling precedent for the grimness and tragedy that will follow.

The bravery of the physical theatre and intensity of emotions expressed by all the dancers do not waver through the performance. This lived experience of incarceration and inhumanity has clearly been so thoroughly researched and portrayed. Indeed, a panel of dramaturgs have worked with director Rachael Swain and choreographer Dalisa Pigram to ensure these voices are heard as authentically as possible. These dramaturgs include: Hildegard de Vuyst, Behrouz Boochani (the Kurdish refugee who wrote the exposé No Friend But the Mountains), Patrick Dodson and Omid Tofighian.

There were so many poignant, heart-wrenching moments in the performance – seeing really is believing, however the cast’s sudden rise into chorus of ‘This is Australia’ (a take on the Childish Gambino song) led by Luke Currie-Richardson was a moment of dramatic irony and choreographic perfection. We were left in no doubt of the overwhelming message of the piece, echoed later in soliloquy by Emmanuel James Brown – the carceral state is racist, genocidal, and the fissures in the fabric of our communities are deepening. Innocent lives are brutally cut short due to state-sanctioned neglect and murder.

Jurrungu Ngan-ga [Straight Talk] was a hard-hitting and at the same time life-affirming piece of art as activism. As dancer Bhenji Ra implores in the final scene, we must ‘say their names’ and listen to these stories as a first step to dismantle the brutally racist and exclusionary so-called justice system here on these unceded lands.