Book Review: Everything Feels Like the End of the World, Else Fitzgerald 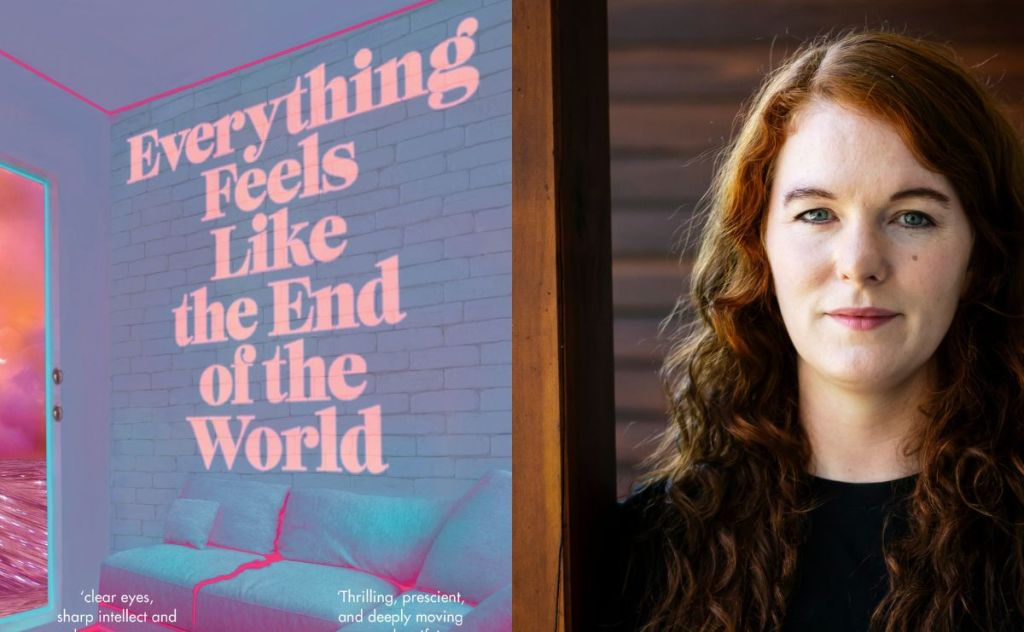 Everything Feels Like the End of the World is a collection of short stories by Richell Prize winner, Else Fitzgerald, whose potential futures function as emotional thought experiments. Riots, bushfires, floods, and famine populate a speculative realm heavy with present reality. Distinctly Australian, Fitzgerald’s landscapes are alive with sensory detail, feeling familiar even in a far-removed form.

Some stories ask questions such as: how immersive does a digital experience have to be before it becomes more real than reality? Others, like ‘Fracture’, and ‘A Shape Outside Language’, cause tears to well like groundwater and rage to burn like fire. What first appears to be a randomly ordered selection of stories solidifies into a cohesive shape, forming a trajectory too resonant to ignore.

‘River’ sets the collection’s tone with a warning about choice and consequence. ‘Feather/stone’ deals in the salty insubstantiality of adolescence, and ‘Maps’ is a tale of morbid hope. ‘Fertile Ground’ depicts a world in which those with impermanent roots inevitably shrivel into resigned hopelessness. ‘Dandelion’ interpolates dissatisfaction and stuckness.

The titular tale, ‘Everything Feels like the End of the World’, evokes a youthful enthusiasm that glitters like embers in a dying world. Echoes of premonition depict an idyllic but decaying Australia trekking towards a terrifying future. Partying towards their potential demise, Fitzgerald’s exuberant characters speak to the importance of perspective with flowers, wine, and climate change. With impressive encapsulations of physicality, this story reverberates with the complementary contrasts of joy and dread, rebellion and resignation, life and deterioration.

Weighty despair hangs too low for the lightness of love to prevail in ‘Some of These May Hurt’, memorable for its themes of consciousness, continuity, and authenticity. It underlines the terror inherent in the concept of a new normal, and highlights the importance of memory, particularly in dealing with grief.

Similar themes appear in ‘Dust and Bits and Broken Bricks’, which bursts with the pain of what could-have-been, and is thematically complemented by ‘All the Parts, Assembled’, which explores the beauty of actively perceiving what actually exists.

‘Simulacrum’ presents a disturbing form of voyeurism facilitated by corporate greed and dangerous technology, whereas ‘Diviner’ and ‘Felidae’ explore genetically engineered otherness. ‘The Gift’, nestled between the latter, functions as an emotional critique of potential circumstance, exploring population control against a backdrop of cycles, connection, and intense familial love.

‘Coast’ hones in on the emptiness of unfilled spaces, and ‘Feed’ displays the news you never want to hear, most of which are disturbingly relevant. Meanwhile ‘Final Broadcast’ is a warning to the world about the arrogance of humanity – a last ditch attempt to do something – prompting readers to decode sets of binary communication.

Each tale is intensely personal, vibrant with specificity, and written with precision. Characters don’t just exist within their settings; entire worlds inhabit these characters. A master of minutiae and memory, Fitzgerald creates an intricate universe of befores-and-afters, sacrifices and consequences, mundane joys and darkest days.

Everything Feels Like the End of the World is an insightful collection of speculative fiction, guaranteed to resonate with socially conscious human beings and sentient AI.

Everything Feels Like the End of the World by Else Fitzgerald