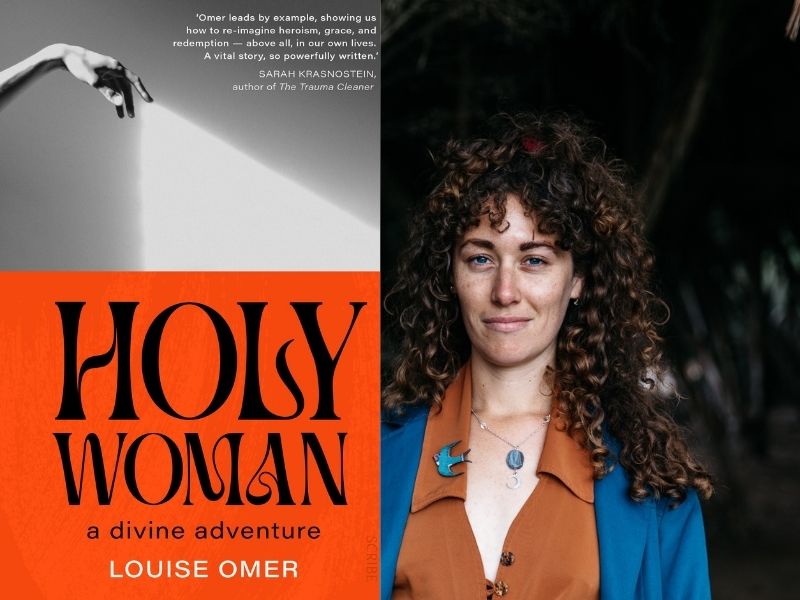 ‘At its heart, Omer’s memoir is a ‘feminist confrontation of patriarchal religion.’ Photo by Sia Duff.

In the early pages of her debut memoir, Holy Woman: A Divine Adventure, Louise Omer muses on her relationship with religion.

‘All that praying, all that singing. To who, you know? A guy,’ she writes. ‘Where am I? Where are the women?’ It is this question – an enquiry into whether a progressive feminist can reconcile belief in patriarchal religious structures – which guides Omer’s narrative.

Holy Woman opens with the breakdown of Omer’s marriage. She was a wife and a Pentecostal preacher, but then ‘everything stopped.’ The space that this rift opened up in her life resulted in a questioning of Omer’s faith: questions which had ‘long lurked’ on the periphery of her vision rose to the surface.

Driven by this need to question, Omer stumbles into pilgrimage. ‘Forsake comfort,’ she instructs herself; ‘seek yonder shining light.’ Omer travels through Ireland, Mexico, Sweden, Bulgaria, and Turkey. She spends time in Scotland, and returns to Ireland. She moves through Italy, Germany, Morocco, and the Czech Republic. Her search, throughout her travels, is to look for the feminine within the divine, and to question the prevalence of masculinity in Christian doctrine – while also inquiring into the ways in which women are positioned and find positionality in Judaism and Islam.

Omer’s memoir cleverly weaves between past and present – the book is divided between sections titled ‘before’ and ‘after’ – which demarcate the unspoken period of marital breakdown and resultant spiritual crisis. Her utilisation of the creative non-fiction form – imbricating research and personal experience into a single, braided narrative – is deft.

Omer has some exquisite turns of phrase, and a skilful handling of syntax, both of which elevate her prose. The lyricism of some sequences – particularly those of Omer’s adolescence, and the moments in her travels when she revels in uninhibited bodily awakening – is an adroit rendering of Omer’s lived experience.

Omer writes from a reflexive awareness of her positionality: a white, cisgender woman born on stolen land. She offers inclusive language on gender and on what it means to be a woman. Queer experience and existence is not hidden in Holy Woman, which is refreshing.

When researching a line of enquiry into some Swedish priests’ use of non-binary pronouns for God, Omer asks whether ‘interacting with a supreme being that queered gender could present a more expansive encounter with the divine and nullify patriarchy’s sins.’ In addition to this, Holy Woman shows the connections between colonisation, Christianity and violence, and makes these linkages explicit within an Australian Indigenous context.

Throughout the memoir, male violence and its consequences haunts the stories Omer tells. From her observation of the zeitgeist in the Republic of Ireland during the 2018 vote to legalise abortion, to her lived experience of the coercive control and emotional abuse of her ex-husband, Omer subtly shows the ways in which religion is used to silence and supress.

Even when Omer transgresses the bounds of her Christian values – engaging in sexually liberated encounters and nude photoshoots with friends – questions surrounding consent, submission, liberation, and respect loom large. Her technique of capitalising her ex-husband’s pronouns throughout the narrative – thereby transforming him into a quasi-worshipful figure – adds to this ambiguity.

At its heart, Omer’s memoir is a ‘feminist confrontation of patriarchal religion.’ It is also, in part, a handbook for people who might feel dissatisfied with traditional religious structures. In the closing pages, Omer presents a note to the reader, in which she calls on ‘all genders to consider the consequences of worshipping a male god’, and offers a short reading list of works which critique and deconstruct traditional religious dogma.

For readers who are not religious, Holy Woman remains a fruitful read: with imbricated research from individuals such as Mary Beard and Julia Baird, Omer’s memoir is refreshingly free from brash ideological statements.

In essence, Holy Woman is inextricably bound up with Omer’s search for wholeness. ‘Cool wind whispered through the reeds,’ she writes. ‘A cloud pulled away, and the sun glimmered on green water. Ripples blossomed from my body and sang across the lake. I might not be holy. But I pronounced myself whole.’