Though strong on content and delivery this concert featuring music from James Bond lacked the innovative sizzle expected from the Little Red Company.
Suzannah Conway 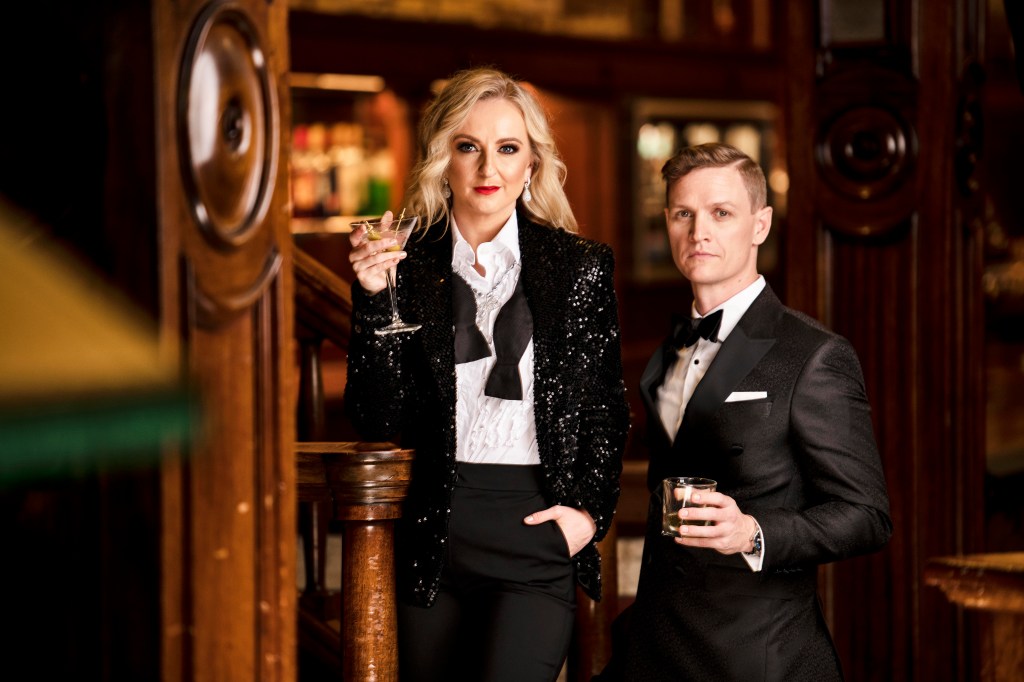 Naomi Price and Luke Kennedy ‘performed their songs with style and flair, but such a high-octane level was difficult to maintain for the remainder of the concert.’ Picture by Dylan Evans.

Skyfall started impressively, the band playing the James Bond 007 theme at high intensity, while Luke Kennedy, in true Bond style and dressed in the obligatory tuxedo, was flown in to the piazza on a rope from the high roof, managing to collect a martini on arrival, while delivering the opening number, ‘Licence to Kill’. Not wanting to be outshone, the stunning Naomi Price followed this by appearing at the side of the piazza in a dazzling new Aston Martin DB11. Dressed in metres of black, fluffy tulle and beautifully bejewelled, she arrived on stage singing ‘Diamonds are Forever’. A powerful opening for both singers, who performed their songs with style and flair, but such a high-octane level was difficult to maintain for the remainder of the concert.

Now that expectations were created, what innovations would be delivered for the audience?

Unfortunately, a little bit of disappointment followed the strong start.

The next few songs were delivered by Kennedy, including Tom Jones’ ‘Thunderball’, Paul and Linda McCartney’s’ ‘Live and Let Die’ and ‘A View to a Kill’, with Price singing Tina Turner’s glorious ‘Golden Eye’, Bacharach and David’s ‘The Look of Love’ and, with a change of costume to a gold lamé pants suit, the immortal ‘Goldfinger.’ Apart from a gratuitous drag queen act by The Slaying Mantis on a hoverboard to accompany ‘GoldenEye’, plus some jokes around the theme of COVID by Price which fell rather flat, the songs were energetically performed but without any production or staging, This sameness in tone failed to match the spark of the originals.

Price brought excellent diction and top notes to ‘Goldfinger’ but did not have the edge or menace that Shirley Bassey brought to this song, while Kennedy’s’ Live and Let Die’ needed additional vocals to make it really sparkle. Naomi Price gave us Carly Simon’s ‘Nobody Does It Better’ with panache, even though her voice was more dramatic than was probably necessary but surprisingly, she was less successful with Adele’s ‘Skyfall’. As the last song of the concert, it was also the first song that she and Kennedy sang together, offering a tantalising glimpse of what could have been earlier in the evening.

It was puzzling that special guest, Lai Utovou, was given only one song, ‘The World is Not Enough’, which he delivered well, his rich baritone offering a different timbre to that of Kennedy’s sweeter tone. Stranger still was the fact that even Irena Lysiuk was advertised in the program, did not appear and was not mentioned. She would have offered a lighter, lyric soprano to that of Price.

The Slaying Mantis danced to Sam Smith’s original chilling hit, ‘The Writing’s on the Wall’, delivered passionately by Kennedy. The choice of a drag queen artist in a James Bond themed show did not appear to have much resonance, particularly when additional vocals, including duets, harmonies and certainly some backing singers would have been welcomed. Introductions to the various film songs would have also been useful

The musicians were all excellent and clearly enjoyed themselves throughout the evening, offering some fine solos from guitar, trumpet, trombone and saxophones with additional orchestration that assisted to spice up the songs. The sound design by Jamie Taylor and lighting design by Jason Glenwright were first-rate, with atmospheric haze and smoke on the stage. Naomi Price’s two outfits, Kennedy’s dinner suit and then his brocade jacket, plus the outrageous costumes of The Slaying Mantis, and Lai Utovou’s red velvet suit added a sense of luxury and style.

As an encore, the four artists gave a medley of Tom Jones’ songs which they clearly relished. ‘Sex Bomb’, ‘Mumma Told Me Not to Come’, ‘She’s a Lady’, ‘What’s New Pussycat?’ and’ It’s not Unusual’ were all delivered with great gusto. It seemed a pity that we had not enjoyed a similar medley of James Bond songs instead.