With Hollywood-style production numbers, glamorous Deco sets and divas worthy of the title, The Merry Widow is a winner.
Gina Fairley
[This is archived content and may not display in the originally intended format.] 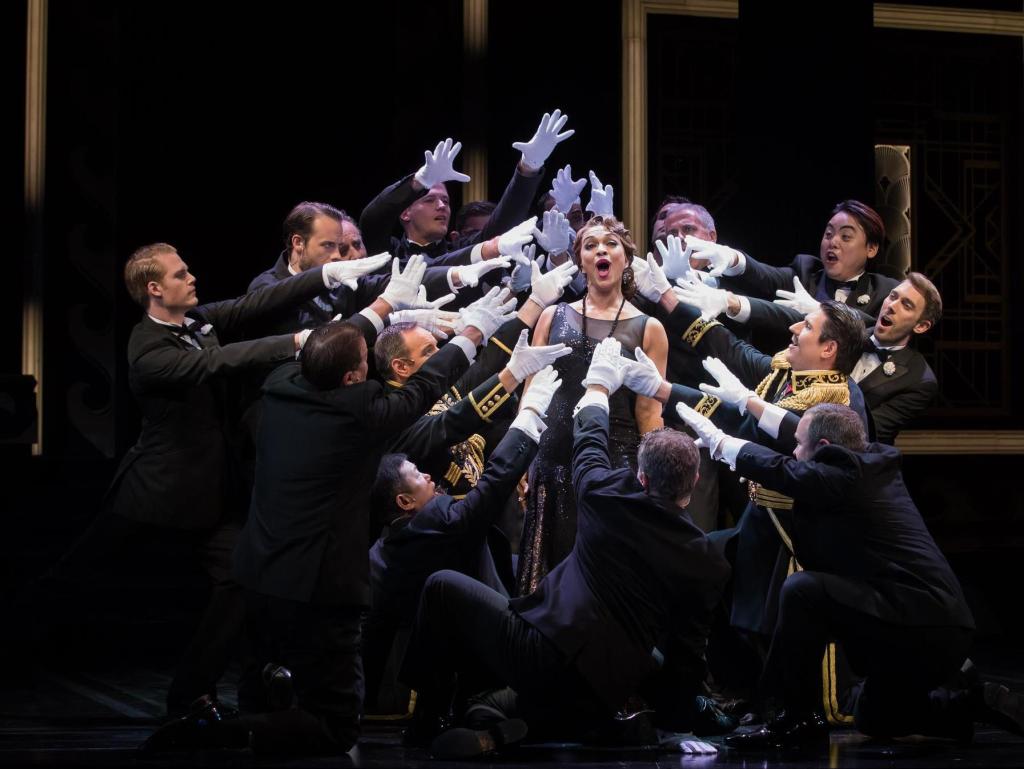 It is a recipe for success: four opera companies collaborating, an opulent, to-die-for-set that inspires home decor envy, a star creative duo in Graeme Murphy and Janet Vernon, and a evergreen operetta filled with waltzes and tunes that challenge the best ear-worm jingles. The Merry Widow is a sure winner.

Its bubbly yet graceful score delivered by Franz Lehar is everything we expect of an operetta. But the genre has often been criticised for ‘not withstand contemporary critical scrutiny’, its politics a little dodgy and at best on the thin side, elitist and misogynist.

ABC’s Phillip Sametz writes for the production’s program: ‘There are plenty of arguments to the effect that it [the operetta] is trapped in its gilded cage, that it refuses to speak to the 21st century, that it is stuck in its land of pre-WWI make believe.’

Is that also true of this new production of The Merry Widow? Undoubtedly yes, but is escapism so bad? While Justin Fleming’s English translation might have added a few 21st century expletives, this operetta is very much locked into its libretto and musical tastes.

However, we are in a new, golden age of story telling – from self-curated content on digital devices to revised operatic productions – and audiences are hungry for it; all of it. This is why The Merry Widow makes sense, now.

Sametz reminded readers that The Merry Widow is one of the most frequently performed theatre pieces in the world, and one reviewer has described it as predictable, but as enjoyable, as lemon delicious pudding. So how does this new production stack up against our love of this classic?

The champagne and cavier set

The story is classic operetta all the way – high society and nobility at play, entertaining themselves with their romantic follies.

The Merry Widow opens with an astonishing Art Deco-inspired set, the Pontevedrian embassy in Paris, created by Michael Scott-Mitchell. Together with Damien Cooper’s lighting the atmosphere created is magical, opulent and dramatic in scale.

While the small nation of Pontevedria is facing financial ruin, hope arrives in the rich, sensual, flirtatious and somewhat flamboyant widow, Hanna Glavari. Danielle de Niese is phenomenal in the role, a kind of energetic dervish whose magic captures everything. Her voice has been described as “creamy”, but it is her capacity to slide from sultry passion and an infectious energy to the emotions of a lamenting lover that best demonstrates her amazing range and sensitivity, matched by her theatrical presence – she is the definition of star quality.

The plot smoulders around her cat-and-mouse romance with former lover Danilo Danilovich – performed by Alexander Lewis – who is disillusioned with love and happy to settle for the ladies at Maxims. From his drunken entrance, his jilted anger to his simmering passion, Lewis is a great talent both vocally and for his stage presence.

Parallel to this story is that of Valencienne, the Baroness and wife of the Ambassador, and her French lover Camille de Rosillon. Stacey Alleaume plays a great Valencienne and her rapport with John Longmuir as Camille is believable. The case of a misplaced fan with the scribblings “I love you”, is the thread that strings this plot together while offering the comic interlude expected of the genre. It works, but feels a little outdated.

This is an opera with a full stage most of the time, and an active cast often joining the ballet corps of the company in creating great stage extravangazas. I am reminded of the Golden Age of Hollywood with swooning clusters of top hats and tails – or perhaps Esther Williams without the pool? – all big arms, big costumes, big bling.

This continues in Act II as the story moves to Hanna’s home for a party and then finally to Maxims in Act III, for the expected finale.

For the past five years, La Boheme has been the production that has bought in the New Year at the Opera House; however it was The Merry Widow that took the honours this year.

It was the first production to be performed in the Joan Sutherland Theatre since its $71 million dollar makeover. A new brightness and clarity emanated from the orchestra pit at the hands of Conductor Vanessa Scammell.

French Horn player with the Opera Australia Orchestra, Michael Dixon, said of that New Year’s performance: ‘For 12 years I’ve played with terrific musicians, all of us working really hard to make a beautiful sound – rarely achieving anything for the audience other than an echo. I had buried any hope of hearing the warm and vibrant sound that emerged from the entire section today. Truly gorgeous.’

Read: High praise as the House’s $71M facelift is unveiled

While many of us may not have an ear as fine-tuned as a French horn player, most of us can recognise the popular appeal of the operetta and its win-win choice for the 2018 repertoire.

Interestingly, Opera Australia were not alone. This production of The Merry Widow was commissioned by the Opera Conference, Australia’s national partnership of companies – Opera Australia, Opera Queensland, State Opera of South Australia and West Australia Opera, which first performed this new take on the 1905 classic in July 2017.

It is a more fiscally efficient way to commission new work, and one can expect more joint productions in the future.

Overall, it’s hard to fault The Merry Widow. To recall Sametz’s summation of the operetta genre: ‘It’s popular entertainment created for theatres to make a profit.’ I have no problem with that as long as the product is good – and it is good.