Artist William Kentridge gives us a mesmorising version of Berg's Wozzeck, his signature animations ramped up to horror vacui proportions, yet in sync with this opera's story line.
Gina Fairley 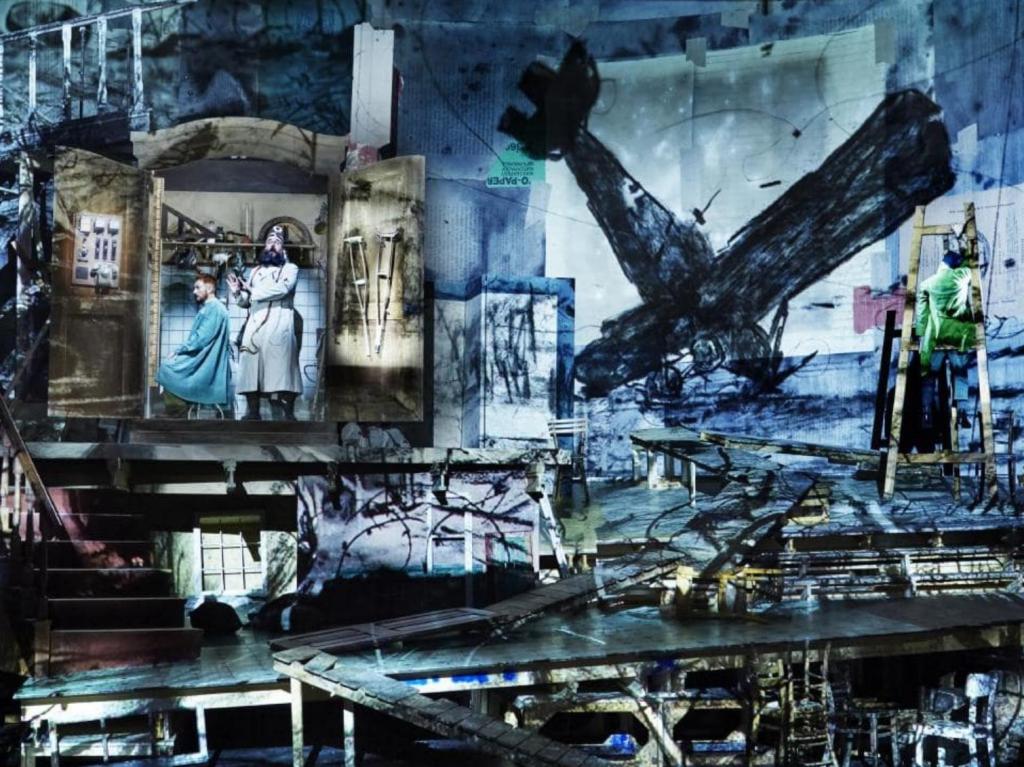 The Australian visual arts sector has long been a fan of South African artist William Kentridge – indeed he currently has exhibitions at the Art Gallery of NSW and Annandale Galleries – so it was with great anticipation his production of Alban Berg’s Wozzeck (1925) opened this weekend (25 January) at the Sydney Opera House.

Kentridge was in Sydney for the occasion. In a pre-performance conversation with Opera Australia’s Artistic Director Lyndon Terracini he said: ‘Wozzeck is about violence born out of humiliation and despair. That feels very much of now.’

Berg’s opera was composed both during, and in the aftermath, of World War I; Berg a soldier himself. It is a tough opera, musically, and Terracini needs to be congratulated on taking on a more challenging repertoire that extends audiences beyond Mozart and Puccini.

While this might be an opera that dwells in the shadows of war’s destruction, served up with a healthy dose of German-angst, it also represents a next chapter for opera with its use of video technology and global partnering to co-produce – both pointing to smarter, more cost-effective, living future for opera.

This production of Wozzeck was first performed at Salzburg Festival July 2018, and is a co-production with The Metropolitan Opera, The Canadian Opera Company and Opera Australia.

As Director, Kentridge is a good call for this journey of transformation. He is not a stranger to the opera stage, having directed Mozart’s The Magic Flute, Shostakovich’s The Nose and Berg’s Lulu for the Metropolitan Opera (New York), La Sala, the English National Opera, Opera de Lyon and other companies.

The story, in a nutshell traces, a man’s demise into madness; a portrait of poverty and humiliation as a soldier is betrayed by his de facto wife Marie, seduced by the pomp and pennies of the Drum Master.

Wozzeck is the subject of vile ridicule and the pawn of his military superiors, the medical play-thing of a doctor to experiment – selling his soul to support a bastard child – and is haunted by war, suffering from what we know today as Post Traumatic Stress Disorder (PTSD).

Wozzeck – of course – kills Maria, and then himself. The victimisation of both Wozzeck and Maria have a currency today in their reminder that victimisation in the military is still very real and that as our world becomes more economically divided, those less fortunate are ill-considered by the system.

While this opera’s story may be bleak – it is short – just 100 minutes, and its visual energy constantly writhing, layering, rebuilding, emerging,  and demanding, makes for a captivating audience experience. One might event suggest it suffers a case of horror vacui.

As one tries to settle into this production from the onset, there is the feeling you have to let something go: do you focus on the projections; read the surtitles; follow the orchestra, the singers … the story? I think this is Kentridge’s intention, to unsettle us in order to provoke thought, but at the same time telling us to ‘trust the process’.

As with Kentridge’s name, there comes a level of aesthetic chutzpah – and trust.  His signature is all over this production, to the point that there is room for little else. The animations of his charcoal drawings are unmistakable, the subject matter perhaps a little less so: war-town fields, scanning searchlights, fallen bodies, severed heads, galloping horses, gas masks.

Regardless of whether you are fan of Berg’s Wozzeck, one cannot deny Kentridge’s projections do an impeccable job at blurring the lines of reality and Wozzeck’s personal chaos and hallucinations.  It is menacing and apocalyptic in tone.

The set itself looks like the battle ramparts with a Escher-tone as space seems to fold into itself, confused between reality and projections. It is masterly. There is a particularly beautiful scene of a passing crowd, a punch of colour to break the mood; and another nice moment as a projector on-stage is wheeled about and climbing upon – it’s a great example of how Kentridge collaborates well.

The set design was created by Sabine Theunissen, who has collaborated with Kentridge since 2003, as has Catherine Meyburgh, who has worked on Kentridge’s projections and animations for 24 years. Kentridge made the point in that earlier conversation: ‘Insofar as I’ve had a skill, it’s the skill of choosing great collaborators.’

In the program Kentridge makes the disclaimer: ‘We had two workshops of about ten days each in my studio in Johannesburg, in which the grammar and vocabulary of the production was developed.’

The projections were streamed from the rear of the theatre, so they could be constantly adjusted, calibrated, to stay with the orchestra and the singers.  The costumes take on a surreal military tone with gas masks worn.

This all – all of it – would just be another gallery or animation by Kentridge without the incredible cast of Wozzeck. In the lead role Barritone Michael Honeyman did a fantastic job in portraying the torment of his character Wozzeck. He had incredible expression and intensity; he was agile and held his presence within this visual dervish.

Soprana Lorina Gore was also strong enough to punch out of this set, and yet at time has a gentle, luscious quality that delivered a layered and convincing Maria. The pair last performed together in King Roger in 2017.

In an unusual twist, the child is performed by a puppet. Kentridge’s choice was rather direct: ‘There is not good solution (when working with children). One watches children and animals on stage in a different way to the other actors. We are anxious about something going wrong, acutely aware of the artifice of what one is watching,’ he said. His solution is to simply eliminate that. I am split whether it is entirely successful. I think you watch the puppet with the same sense of trepidation and perplexed curiosity that it does little to nullify the situation.

It was British tenor John Daszak who played The Drum-Major, while tenor John Longmuir took on the neurotic Captain, and bass Richard Anderson the Doctor. These aren’t easy roles that Berg has made – they are vocally demanding, at times pushing range, and definitely pushing dramatic capability. There was little to flaw in all their performances.

Wozzeck is an opera we don’t often see on our Australian stage, and it is definitely worth catching.