Review: West Side Story, Opera on the Harbour

More aptly "wet" side story, the show on the harbour opened, but it was a lost opportunity as a classic line was favoured over a more contemporary lens.
Gina Fairley 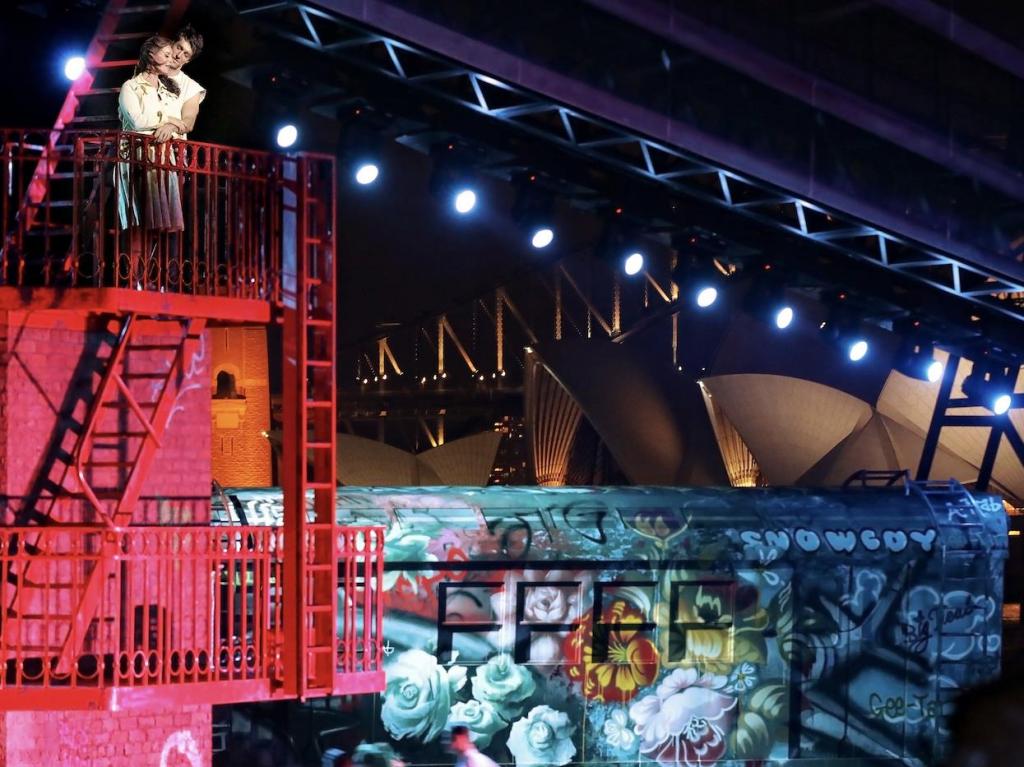 But after seven years rolling out opera’s most popular repertoire, the change was a welcome one for many driving reach for a more diverse audience.

Leonard Bernstein’s 1950s masterpiece is the first musical to be staged on the harbour-side stage, and despite the bleak skies and teeming rains on opening night – it poured for the entire first half of the production – it did little to dampen the enthusiasm for this classic stage production.

When the Hollywood version of West Side Story was released in 1961 (just four years after it was first performed) it was the biggest Oscar-winning musical of all time. Steven Spielberg is in pre-production for a new version of the movie with a ‘Trumpian tone’, and it will be performed not only on Sydney harbour this year, but an alternate new staging also opens in Melbourne in April (Director and Choreographer, Joey McKneely).

Clearly, there is a zeitgeist that West Side Story speaks to our times – as President Trump promises to build his wall on Mexico’s boarder, not to mention his recent attempt to illegally cut off federal disaster assistance to the island of Puerto Rico (an unincorporated territory of the US) in the wake of Hurricane Maria, and racial profiling and tensions around the “immigration situation” has been described as a global crisis.

For this reason, I would argue that Director Francesca Zambello did not extend this production, or push it far enough towards a contemporary lens so that audiences might indeed question the topics at hand. Rather it delivered more as a finger-clicking old favourite.

While it was on her radar, she did not push it far enough. Zambello writes in the program: ‘Especially with the rise of social media, we have all become more tribal in our outlook. I think the story of two warring “tribes” challenges all of us to look at how we define and marginalise “the other.”

One thing on Zambello’s side was that the production felt cohesive – from the costumes, to the stage design, lighting, and choreography – this musical was totally in sync with itself and served up a very polished production. The cross-over director – at ease in both the opera and musical worlds – was the perfect choice.

Brian Thomson’s design set the production under the expanse of a freeway overpass; with abandoned subway carriages heavily graffitied – it felt both nostalgic and contemporary – and relied little on gimmickry, except for the mandatory HOSH fireworks … but hey its Sydney.  John Rayment’s lighting design extended the set and focused the drama, beautifully connecting the echo of Sydney’s skyline.

Thompson did well in compartmentalising nodes of the story, while leaving enough expanse for the energetic choreography of Jerome Robbins, adapted by Julio Monge for HOSH. This year marks the 70th anniversary of when Robbins went to Bernstein with a proposal he couldn’t resist – to create West Side Story.  Monge carries that authenticity; he knows this story, having attended the University of Puerto Rico and American Academy of Dramatic Arts and now living in New York.

One plus for the rain was that the moves of the performers were heightened, flicks of water spraying with their high kicks. The performers didn’t flinch at all, their high-voltage gestures unreserved with the weather. They gave a five star performance.

While my flimsy $5 biodegradable poncho thankfully kept me dry, it did little for the amplification of this production, as the rain dampened the sound and voices felt inconsistent. The conditions made it hard to review it accurately.

It was clear however, that the stars of the night were Australian soprano Julie Lea Goodwin in the role of Maria, and Karli Dinardo as Anita, who’s performance was flawless. Dinardo, while Australian born is now based in New York, and is extremely comfortable in the role.

Goodwin’s diction and Puerto Rican accent were consistent, and while some criticism were laid upon Opera Australia for casting Goodwin over a Latina actress, one need remember these are blind auditions when casting. Goodwin nails Maria from her innocence in ‘I Feel Pretty’ to her passion and guts in ‘A Boy Like That’.

Goodwin is a well-seasoned Maria, having first played the role at 19, and is another performer who has managed that seamless crossover between musical theatre and opera. She made her debut with Opera Australia in 2015.

However, Australian tenor Alexander Lewis playing opposite Goodwin as Tony was inconsistent, and while he had a good connection on stage with Goodwin – and dramatically delivered his role – vocally he did not always deliver across the register. His delivery of the key hit ‘Tonight’, however, was endearing and enduring.

In contrast, Mark Hill playing Jets leader Riff, was super in the role, exploding onto the stage with an energy uncompromised. And the big ensemble numbers like “America” were fantastic, spot on in delivering the expectation of those who love this production and capturing the hearts of newcomers.

Despite the rain, Bernstein’s famous score remains unforgettable with songs like ‘Maria’, ‘Tonight’, ‘Somewhere’, ‘America’ and ‘I Feel Pretty’ that have understandably stuck with us for a couple of generations, handed down on vinyl in the lounge room. Who didn’t click their fingers and pretend they were a Jet?

Dr Haruhisa Handa, patron of this ambitious event, reminded in the program notes: ‘Music is humanity’s common language. Our universal appreciation of this art form breaks down the barriers of colour, creed and county which often divide us.’

Zambello extended that idea: Leonard Bernstein scrawled “an out and out plea for racial tolerance” across the first page of his copy of Romeo and Juliet. As we approach this piece in 2019, in the midst of a world refugee crisis, I hope we can make that plea reverberate in a new way.’

What might be more obvious is the senselessness of the tragedy resulting from such racial/cultural tensions. It is crazy to think that we have been telling this story since 1957 and yet we still struggle to take its lessons on board. Perhaps a production on one of the world’s great harbour stages – the site of its own conflicts of immigration – audiences might take a moment to think beyond the fireworks and finger-snapping fun.