As a response to the Covid-19 lockdown, Musica Viva is presenting an online concert program, the Discover series. The first in the series was a modest live-streamed chamber music concert, with accordion and cello, offered memorable moments.
Suzannah Conway 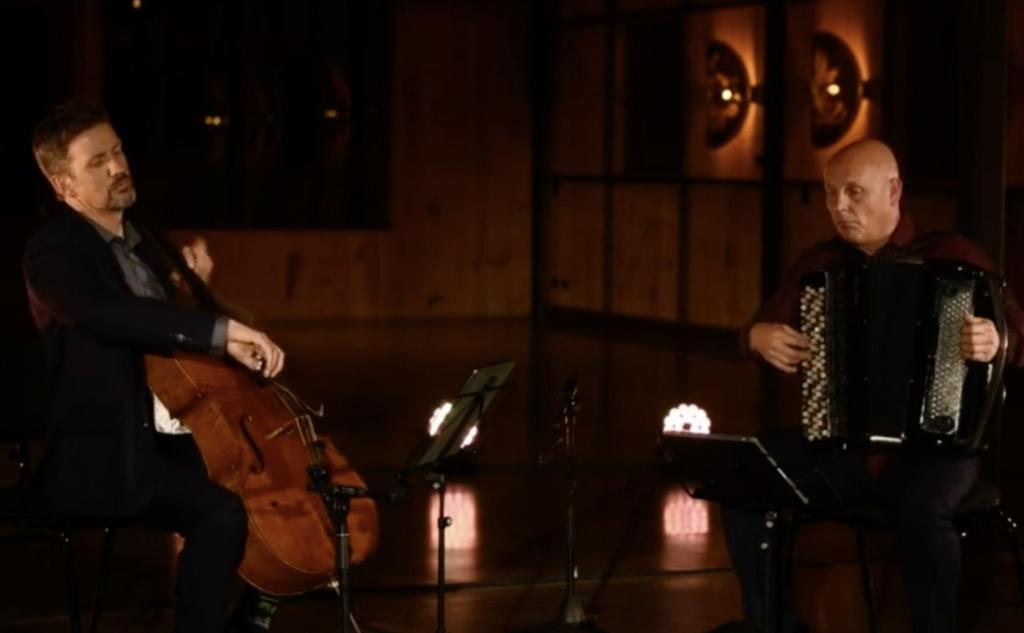 The inaugural concert featured the talents of world-renowned classical accordionist, James Crabb, alongside Goldner Quartet’s cellist, Julian Smiles, and was staged in an atmospheric cellar at the Bendooley Estate in the Southern Highlands. It was a simple but effective presentation.

The program offered five separate works lasting about 45 minutes in total with insightful introductions from the two soloists about their instruments and the pieces chosen. The repertoire was bookended by two tango pieces, appropriate for the accordion in particular, while the central work was a C.P.E. Bach sonata, originally composed for viola da gamba and harpsichord, which was preceded and followed by liturgical pieces, one written for the cello plus keyboard, the other for violin and organ.

These transpositions to cello and accordion were, for the most part, cleverly arranged. The program was thoughtful and interesting while the skills of the musicians and their instruments were very much to the forefront.

A well-crafted composition, fun but elegant, got the concert off to a good start.  Elena Kats-Chernin’s  Slicked Back Tango is a short but delightful work. A lively rhythmic piece based on jazz and gypsy themes where both instruments could display virtuosity; the cello sliding easily through the scales with some elongated bow work and the classical accordion showing the full range of the double keyboard.

This was followed by the beautiful and haunting work of Ernest Bloch, entitled Prayer, from his work, Jewish Life. Written as a cello solo with usual accompaniment by piano or strings, here the accordion played a more subtle role lending some sweetness to the overall result, the ensemble delivering a satisfying whole. Julian Smiles’ playing was exemplary, the sonority of his instrument producing a warm, rich and poignant work with delicate phrasing and lyrical sweetness.

The central and longest piece in the program was C.P.E. Bach’s Sonata in G minor, a lovely and somewhat surprising Baroque work from the eighteenth century composed by J.S. Bach’s son, who was equally as famous in his day as his renowned father. Originally composed for instruments of the period, the viola da gamba and harpsichord, here the Sonata was transposed for the cello and accordion with mixed results. The work itself has a sprightly, well-paced brilliance, allowing dramatic moments as well as slower, lyrical passages with impressive arpeggios, mainly from the cello. It is in many ways a modern work, though its Baroque rhythm and style is omnipresent.

The cello and accordion for the most part worked consistently well together, the theme being taken up by one and then bounced to the other in a regular pattern, but it seemed to lack depth of sonority as a whole. The instruments certainly blended as well as they could, with Crabb giving the accordion a lightness of touch that would be difficult to emulate by anyone less skilled. However, while the sweetness of the cello and the instrument’s range complemented the composition, the accordion, with its more limited keyboard and lack of darker notes, did not ignite as we might have expected from either a harpsichord or organ, making it overall less interesting.

Saint-Saëns Prière Op158, written for cello and organ, represented the French composer at his lyrical best. Stylish and lush in its phrasing and delivery, the tune is both simple and lingering. Liturgical in intent, the work is meditative and haunting. Well suited to the cello’s timbre, Smiles played this with passion and produced some expressive and beautiful phrasing. An organ, rather than an accordion, would have added to the sense of liturgy, though Crabb played with great sensitivity and attention to detail and gave his instrument some sweeping dramatic moments that assisted to deliver this work to an enjoyable conclusion.

The final work was from the great Argentinian composer, Astor Piazzolla. Le Grand Tango is one of his more interesting pieces, expressing the spirit of the ‘new tango’ and successfully capturing the spirit of traditional sultry tango with more modern jazz-inspired rhythms. Originally composed for the great Russian cellist Rostropovich, with piano accompaniment, here being replaced by classical accordion made perfect sense. Piazzolla was, after all, a master of the south-American accordion, the bandoneon.

The work has some marvellous rhythmic sections and dark earthy tango segments, well-suited to the jazz-like almost double-bass rendition from the cellist, accompanied by ferocious dance elements from the accordion. The cellist had plenty of opportunity to display his virtuosity demonstrating many glissandos and double stops, with the accordionist doing overtime on both keyboards, producing a wild and frenetic pace.  Both instrumentalists entered fully into this work, sparking off each other, having great fun and producing an electric energy that brought the concert to a rousing finale.

This was a modest but carefully presented chamber music program with two first-class musicians who clearly relished both working and playing music together and bodes well for the future of the Discover series.