A riveting piece of contemporary circus that celebrates the group over the heroic individual and explores notions of trust and humanity . Exhilarating!
Gina Fairley 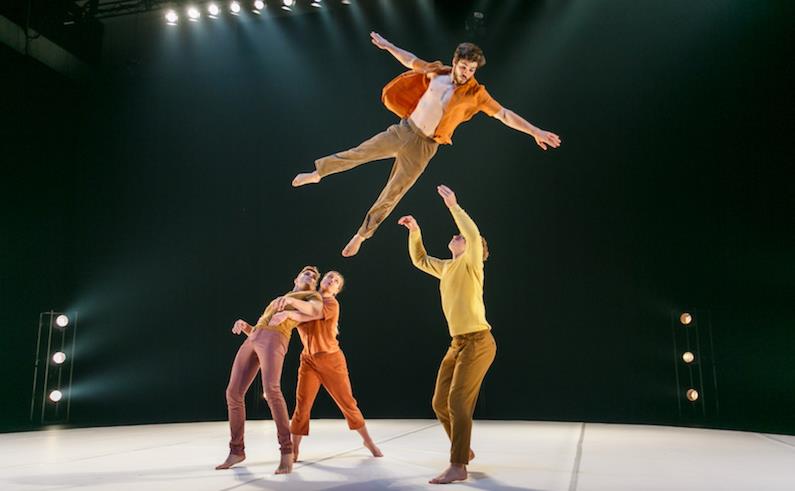 The staging was extremely minimal – a round stage edged by exposed lightbulbs, void of colour. It gave little hint of the high octane event about to unfold, featuring 10 performers working in sync over an incredible 70 minutes to deliver what will surely be one of the most exciting stage experiences premiering in 2021.

Part dance, part acrobatics, the Brisbane-based company Circa have developed their own signature style that is both athletic and graceful – jaw-dropping, seat-clawing and armchair-exhausting.

The company has garnered global attention (especially as a festival favourite) and this new production adds to their exciting repertoire – no doubt destined to tour when borders are again open.

Humans 2.0 is the next iteration of Humans, presented at Sydney Festival in 2017. As the title suggests, it confronts a range of emotions associated with being human but does not get bogged down in deep narrative or dramatic specificity.

In a curious way, the most resonant feeling is a sense of the ‘superhuman’ when it comes to this incredible troupe and their spatial dexterity, their balance, elasticity and capacity to work as one.

The music composed by Ori Lichtik sets the meter with a steady beat; the lighting by Paul Jackson largely demarcating movements or acts that unfold.

It all starts with a kind of staccato interaction – lights up, bodies in rigid plank positions, lights out – repeating in tempo as slow movements build across the scene, moving to a crescendo of bodies stacked three high on shoulders.

Perhaps this is where the theme of humans most plays out most strongly, in a world that has (especially this past year) forced notions of group responsibility as we face the world’s traumas, and our individual role.

Across the performance there is a kind of casual flicking off another’s hip, a roll over an arched back, balance upon one’s head, sliding body lengths or flung mid-air like a rag doll, all with an ease paced out with a gentle stride between gestures – it is not rushed.

The troupe seemingly build a bodily scenario and then go about dismantling it, a bit like our new non-normal world and the need to constantly re-calibrate.

From that initial choreographed sequence, the audience remains fixated – as a single person swings from ropes – her gestures intentionally jagged and rough, to the company rolling and sliding over a trapeze, playing with our perceptions of this classic circus act, to staged tableaux in black as performers use a handstand cane.

The tension is broken towards the end of the performance when the performers, one at a time, take a flying leap towards each other with outstreached arms in a classic “I’ve got you” gesture, only for them to intentionally turn from their catch. It goes back to that metaphor of trust.

Overall, this is a riveting piece of physical theatre – great for all ages. It doesn’t demand too much, and given that we all understand our own physical capabilities, it has a curious capacity to connect. Furthermore, the way Circa has constructed this production, it celebrates the group rather than the heroic individual, and in that audience feels oddly included.

By Circa
At Carriageworks for Sydney Festival