A revival of a lost classic has charm, frivolity and elegance.
Isabelle Oderberg 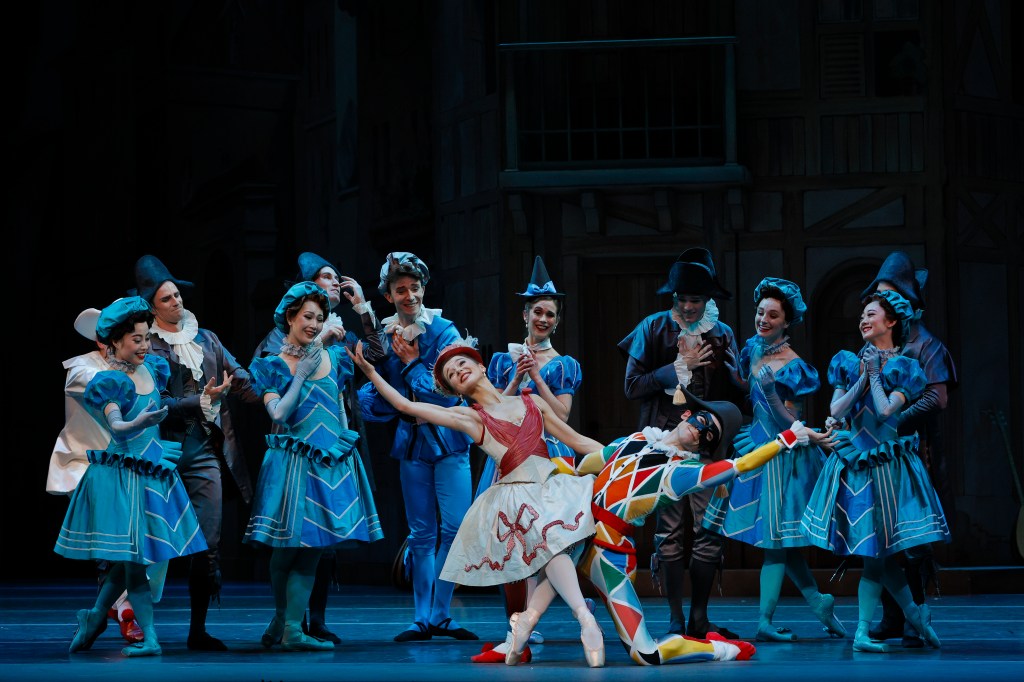 ‘Harlequinade is a form of British pantomime genre, in which a harlequin and a clown play principal part.’ Photo by Jeff Busby.

Opening nights of any show are full of chemistry and excitement, but the first night of Harlequinade was made particularly special by the fact that since its premiere run in 1900 in Russia, what is now a called a ‘lost classic’ has only been shown once before now, in a revival run by the American Ballet Theatre.

It was created by Marius Petipa, the choreographer who created two of ballet’s most famous works, Swan Lake and Sleeping Beauty. The score is by Riccardo Drigo, a close collaborator of Pyotr Tchaikovsky. Additional choreography was provided by Alexei Ratmansky, ahead of its re-introduction in New York in 2018.

The storyline of the ballet is that Columbine (Benedict Bemet), in love with the penniless Harlequin (Brett Chynoweth), is imprisoned by her father Cassandre (Steven Heathcote), watched over by Pierrot (Callum Lindane). Her father arranges for her to marry the wealthy Léandre (Timothy Coleman), but Pierrot’s wife Pierrette (Sharni Spencer) takes pity on the lovers and releases Columbine. With some help from the fairy queen, Harlequin triumphs and the two are wed, with a party and great frivolity ensuing.

The sets and costumes of this Australian Ballet production – which were the absolute stars of night – were created by Robert Perdziola, ‘based on a close study of the 1900 originals, which are held in a museum in St Petersburg’. Stunningly decadent, evocative and so intelligently functional, they set the scene so beautifully, that you couldn’t help being transported totally and utterly into the world of Harlequinade. Orchestra Australia, conducted by Nicolette Fraillon, was flawless and elevated the production in the most beautiful way.

Harlequinade is a form of British pantomime genre, in which a harlequin and a clown play principal parts and was popular in the 17th and mid-19th centuries, adapted from the Italian-style slapstick, Commedia dell’arte. The ballet itself is light-hearted and dainty. The first half before intermission provided some genuine belly-laughs, though the second-half was not as chortle-inducing and more elegant and classic. The stand-out performer for me was Chynoweth as Harlequin, with extremely strong solos, followed extremely closely by Spencer as Pierrette.

Some of the ensemble pieces felt like perhaps they fell victim to opening night jitters, with minor but noticeable synchronisation issues and other small teething problems. All in all however, the production was of an extremely high standard, and I would certainly expect the tightness to improve through the run as the dancers find their feet, so to speak.

Seeing 32 children on stage as part of the cast was also incredibly uplifting and there were sighs of glee at the cuteness. This element of the work also provides inspiration for any young ballet fans in the audience, especially given the show is being pitched as family friendly.

But I would note that my six-old was one of the very few children in the audience and we were stopped on several occasions by punters to tell us how glad they were to see a child of his age in attendance. I don’t know if it’s because it was an evening show or that the costs of tickets are prohibitive, but it’s something the Australian Ballet needs to consider if it wants to continue to have a following in future decades.

On June 23 and 25, the production will welcome guest performer Daniil Simkin, principal artist with Staatsballett Berlin and a guest artist with American Ballet Theatre, to reprise his role of Harlequin. There will also be a livestream on June 24.

Harlequinade will be performing until 25 June 2022