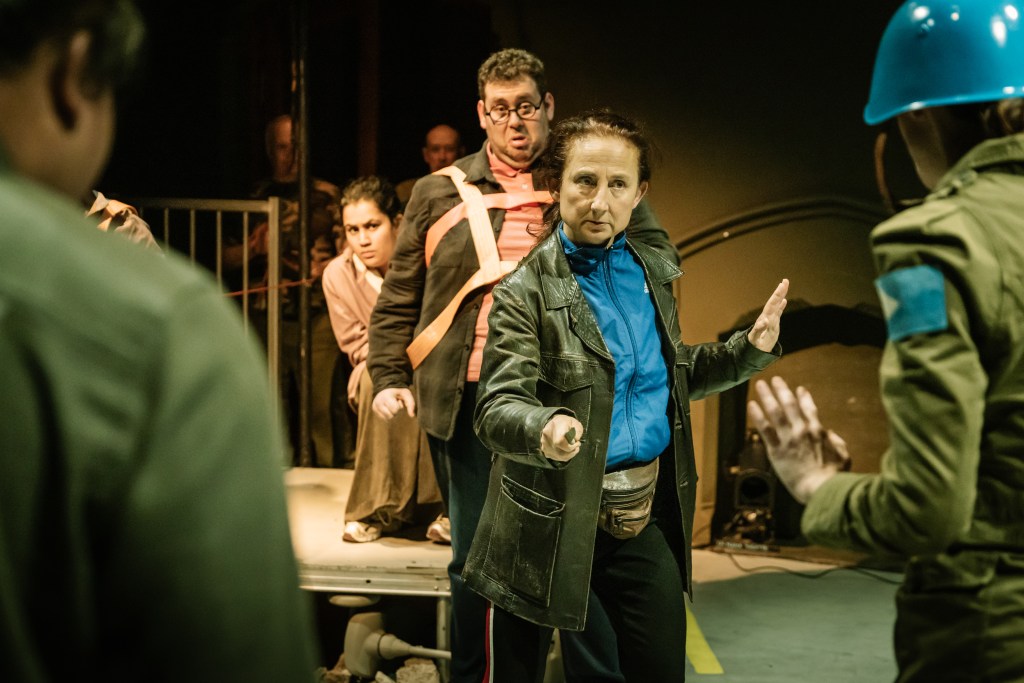 ‘La Mama are old hands at this work, and particularly at making bold political statements through theatre.’ Photo by Darren Gill.

The work that our independent theatre companies do in incubating new projects is essential to our broader arts ecosystem, and at no time is that truer than during the pandemic, when artists have been struggling with truncated rehearsal times and the ever-greater difficulty of drawing an audience among cautious crowds. La Mama are old hands at this work, and particularly at making bold political statements through theatre. A new production of Bertolt Brecht’s Mother Courage and her Children in Tony Kushner’s sparkling translation gets to the heart of an old issue for a new time.

The production was produced by Lara Week and Bagryana Popov. Popov is a lecturer in theatre at La Trobe University and her focus is particularly on theatre as a medium for social commentary. Popov has practiced in Finland, Bulgaria and Macedonia. Her interest in refugees particularly fits well within the story of Mother Courage, whose protagonist drives around a wagon and is essentially a war profiteer before a horrible twist halfway through the play sees her fate take a turn for the worse.

Mother Courage was Brecht’s great play about compassion for the sufferers of war, and staging it now, in the middle of a conflict in Ukraine that could last years and have radical implications for the future, is a particularly timely choice.

And at La Mama it was rousingly well received, with audience participation, generous laughter and the engagement of an almost full house. Kushner’s translation is not new, but its wry self-awareness and its commitment to a dark subject matter makes it an arresting evocation of the horrors of war.

This was not a perfect production, but it was an interesting one. A cast of diverse ages and backgrounds showcased the important work La Mama do in serving as a hub for independent theatre, and allowing its practitioners to try new things. The original songs, by Paul Dogood and director Damian Millar, added a note of immediacy and sometimes comedy to the play.

The acting was varied, but knitted together with great enthusiasm and pathos. At times, I wished for more tonal range or more expressiveness from actors who had a set way of delivering a story. This wasn’t uniformly true, however, especially of Lakshmi Ganapathy and Kate Bayley who shone in a variety of roles. Indeed the doubling was part of the suspense and texture of the play. It’s a small venue and sometimes passion trumps diction, leaving the clarity of the script temporarily lost. But there was still a lot to like about Brecht’s passionate exploration of pacifism.

Mother Courage and her Children was performed from 1-19 June 2022.