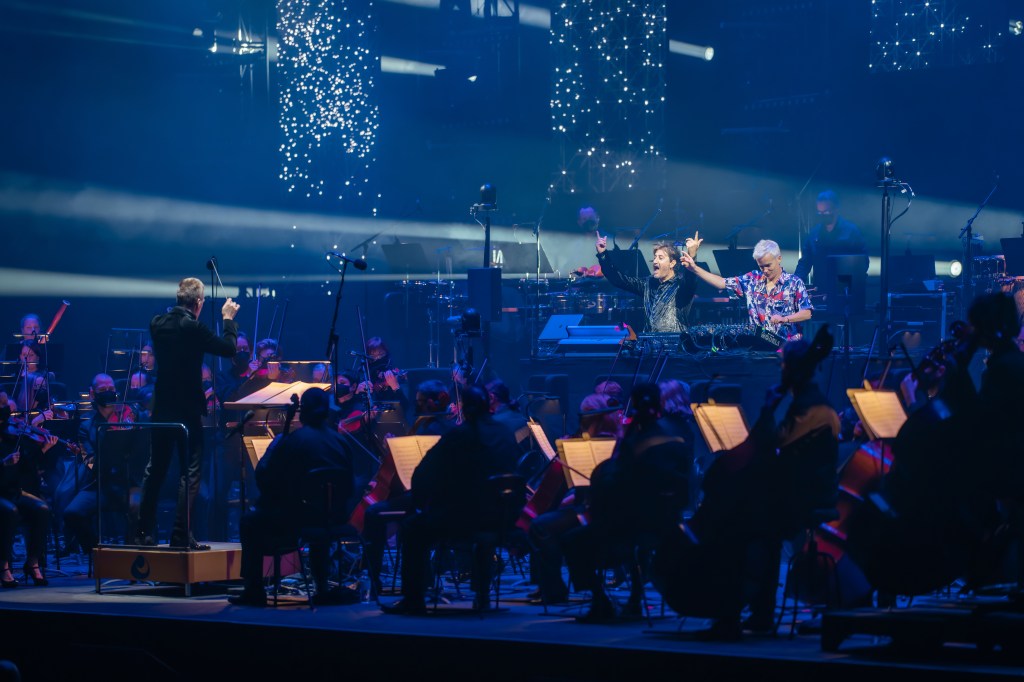 The performance is an ‘immensely enjoyable mash-up of classical concert and DJ set.’ Photo by Jiayuan Liang Xplorer Studio.

The Adelaide Symphony Orchestra has been a part of many innovative collaborations over the years, with musicians including Ben Folds, The Whitlams, and The Hilltop Hoods. For their latest event, they have once again brought us an exciting partnership, this time with Melbourne duo The Avalanches. Currently comprising Tony Di Blasi and Robbie Chater, the electronic music group are known for their inventive approach to vinyl sampling – indeed, their debut album Since I Left You contains an estimated 3500 samples. Their long-awaited performance with the ASO was thus a particularly satisfying collaboration, as the 75-member orchestra went some way to representing the range and virtuosity of The Avalanches’ unique sound.

The concert was a playthrough of their 2000 chart-topping album, beginning with an orchestral overture that led into hit title track ‘Since I Left You’. From the moment of Chater and Di Blasi’s entrance – emerging through the orchestra to their sampling equipment raised in the centre – it was a captivating show.

The energy and richness of tracks such as ‘Radio’, ‘Two Hearts in 3/4 Time’ (during which orchestra members leapt from their seats in time to the waltz-like rhythm), and ‘Close To You’ built up to the most highly anticipated song of the night: ‘Frontier Psychiatrist’. Containing opportunities for all areas of the orchestra to shine, from violins and woodwind, to thundering brass, to the triumphant clash of cymbals, along with a clever and comically bizarre arrangement of sampled lyrics, it reached operatic heights. One couldn’t help but feel it was how ‘Frontier Psychiatrist’ was meant to be experienced. The concluding tracks were similarly strong, winding down the evening with more mesmeric, dreamlike arrangements, including ‘ETOH’, ‘Summer Crane’, and ‘Extra Kings’.

The performance was ably supported by opening act Electric Fields, a First Nations electronic duo. Their simple setup, with Michael Ross on keyboard elevating vocalist Zaachariaha Fielding’s soulful voice, was a beautiful and fitting counterpart to the main event. Their short set was over almost too soon.

Since I Left You, Live combined a satisfyingly straightforward concept – the chance to hear an acclaimed album performed live from start to finish – with efforts to amplify it, creating something fresh and collaborative. And it worked, in the way one always hopes live performance will: providing a unique experience without obscuring the essence of the familiar and much-loved original music.

The Avalanches: Since I left You was performed with the Adelaide Symphony Orchestra on 18 May 2022 as part of Illuminate Adelaide.