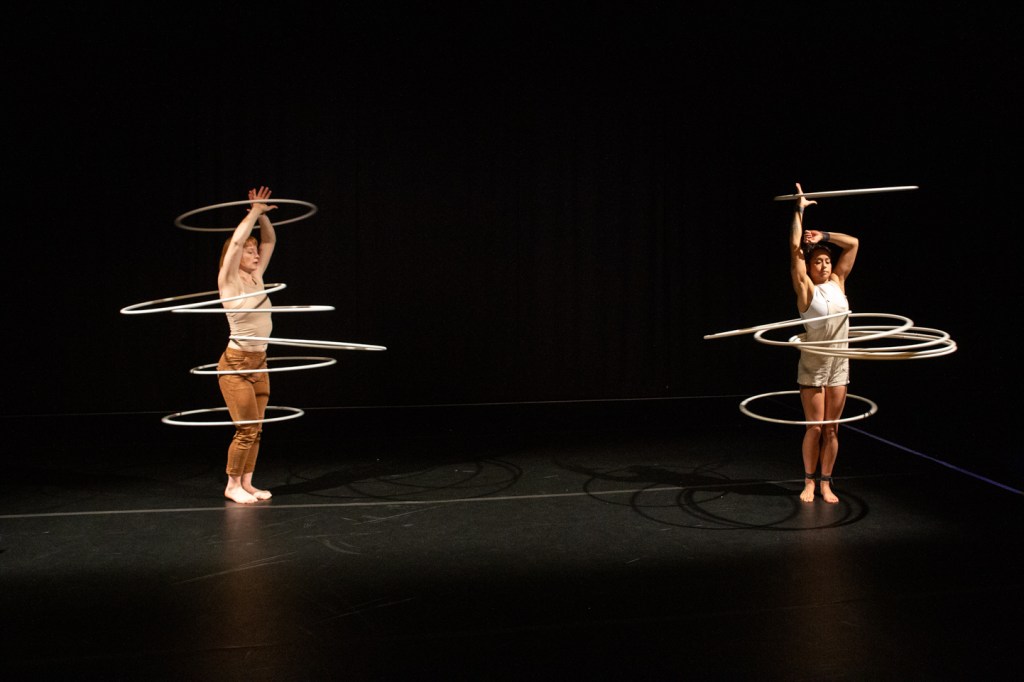 ‘These performers have such pleasure in each other’s work, share joy in performing the show, and approach their audience with generosity and love.’ Photo by Hamish McCormick.

The program for Interloper lists Ryan Mahoney as sound designer, and he has indeed provided the show with an entertaining soundtrack, but the real underscore of Interloper is made up of ‘ooohs’ and ‘ahhhs’, of whispered ‘wows’ and audible gasps, and, often, of the admiring silences of the rapt audience.

Interloper is an hour-long contemporary circus show which could be called ‘The Lengths Some People Will Go To For A Cup of Tea.’ It has a simple, loose structure which encompasses several breezy comedy routines, sequences of solo and group acrobatics verging on contemporary dance, and a range of more traditional acrobatic/circus acts.

It is performed by five charming and highly skilled co-creators. In this, its premiere season, injury and COVID took their toll: neither Tony Rooke nor his understudy, Jake Silvestro, could perform, so the main clowning role was undertaken at short notice – and with great success – by Jamie Bretman.

Circus seems to be a growth sector in the performing arts at the moment and any new act, show or company entering the market had better have something special going for it. The Interloper company and show have two distinctive features.

First, the company of five includes two married couples: Conor and Freyja Wild, and Mieke Lizotte and Lewie West. The level of playfulness and complicity amongst the players is greatly enhanced by the understanding they enjoy and the trust they have in each other. These performers have such pleasure in each other’s work, share joy in performing the show, and approach their audience with generosity and love: all of which magnifies the audiences already high levels of enjoyment.

Then, second, there is the construction of the show. While it does frequently involve one act followed by another, there are sequences in which two acts perform simultaneously: for example, two performers do some incredible hula hooping while, in their midst, another performer undertakes an series of intricate acrobatics. Juxtaposing the two creates something far richer than each act individually, and provides a truly beautiful study of the relationships of bodies in and around space. These moments are original and entrancing.

The production is low-tech. Sounds and lights enhance but never upstage, and props are minimal and thoughtfully deployed. The emphasis is firmly on the presence and skills of the performers.

Interloper is a celebration of human connection, an hour of wonder and joy. It’s a generous show that earns loving and enthusiastic applause.