How the digital age destabilised and reshaped journalism.
Arjun Rajkhowa 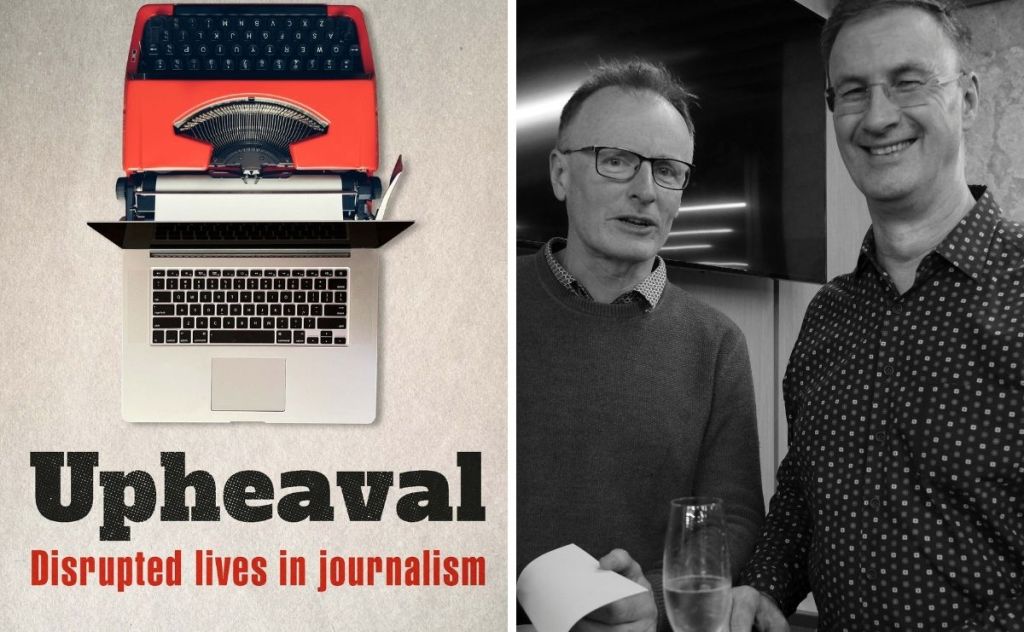 Editors Andrew Dodd and Matthew Ricketson at the Melbourne launch of their book, Upheaval. Picture by Liam Cochrane.

Upheaval, edited by Andrew Dodd and Matthew Ricketson, is a book written by media academics who have undertaken qualitative research with 57 Australian journalists on the topic of digital disruption and structural change in the Australian mainstream media. The majority of the research participants were affected by major rounds of retrenchment in the last ten years at the largest media companies in the country. They describe the advent of the digital age and the destabilising ways in which its economic impacts were felt. As Alysson Watson, one of the interviewees points out:

‘I don’t think I could have seen the extent of the devastation. The extent to which, once advertising became really cheap online, and once news became free online, we would never recover from that. For a long time, we just kept our heads down and hoped that we were special enough that we would survive.’

Another interviewee, Maureen Shelley, notes ‘The near-sudden disappearance of the ”rivers of gold’ of classified advertising – recruitment, real estate and motor vehicles… was just like a catastrophic failure of revenue.’ The journalists in the book describe how that precipitous decline resulted in significant structural change, starting around 2008 and culminating in well-publicised rounds of mass retrenchment, particularly at Fairfax and News Limited, in 2012 and 2016. These critical moments serve as the main historical and conceptual axes of the book.

The forces that definitively reshaped the structure and composition of the Australian establishment media in those years continue to reverberate today. In 2020, during the COVID-19 pandemic, a large swathe of news organisations in regional towns around Australia closed down, bringing to an end an era of self-sufficient regional media ecologies that, as several journalists in the book recount, supported many journalism careers and helped sustain regional towns’ local identities throughout the 20th century.

The book captures insightful insider perspectives on the transitions underway in journalism. With structural change in the cash-strapped digital era – and the accompanying decimation of editorial work particularly which the book is especially good at describing – came new ways of producing news. From various journalists’ accounts there emerged a distinct sense that many facets of traditional journalism – including editing, investigative reporting and detailed reporting on social issues, for example – were in some ways eroded.

Journalists tried to hold onto their methods of producing news, values and professional identities in this era of change. However, news production moved on, driven by the urgent task of attracting audiences (sometimes with what came to be later known as ‘clickbait’) – and thereby retaining advertising revenue – in a heavily saturated and distracting online environment. Journalists in Upheaval describe a powerful tension between the ‘traditional’ and new approaches, with many feeling beleaguered by the latter.

As journalist Jo Chandler notes, referring to her experience of the cultural changes that accompanied the structural ones at her organisation in these years: ‘And the real sense of it was that they were a media company trying to figure out how to transition and that the journalism just really was – it was kind of an impediment to whatever they were going to become.’

Fundamentally, this is a book about journalists’ dilemmas around either remaining in or transitioning out of the profession in the digital age, and how they coped with the challenges that emerged. The authors skilfully capture individual journalists’ perspectives on and experiences of the relatively precipitous changes that saw the establishment media go from being the primary force of information dissemination in society to one that had to compete with a multitude of several niche platforms to attract and retain audiences.

It is also a book about the history of the establishment media in its heyday. Aimed at those who have an interest in journalism as a discipline, the first half of the book offers many different stories from interviewees that describe how Australian journalism evolved as a profession in the mid-to-late 20th century, and is perhaps quite remarkable in its own right. Standout chapters here include the one on the crucial role of the sub-editor as a trainer and mentor in the era of media cadetships, and the one on journalism and trauma, which is particularly incisive in how it disentangles the various ways in which journalists cover traumatic events and deal with their exposure to these events; and, most importantly, how they may both positively and negatively affect the lives of the people involved.

From Upheaval, a distinct sense of the newsroom as a microcosm of society emerges, a place where whole worlds of information are churned out daily for public consumption. As journalist David Marr comments in an interview, in his time, newsrooms were:

‘Full of experts on the strangest things and the most important things, people with weird arcane knowledge, people with real understanding and experience of things that mattered, places where you could ask anybody anything, though you might get your head bitten off if you interrupted someone on deadline.’

This is undoubtedly a powerfully nostalgic book. But it also raises timely questions about the value that we attach to public interest journalism and whether we can find ways to sustain what is valuable in it.