The bestselling author of the Rosie series injects method into the madness of attempting to write a novel.
Sarah Halfpenny 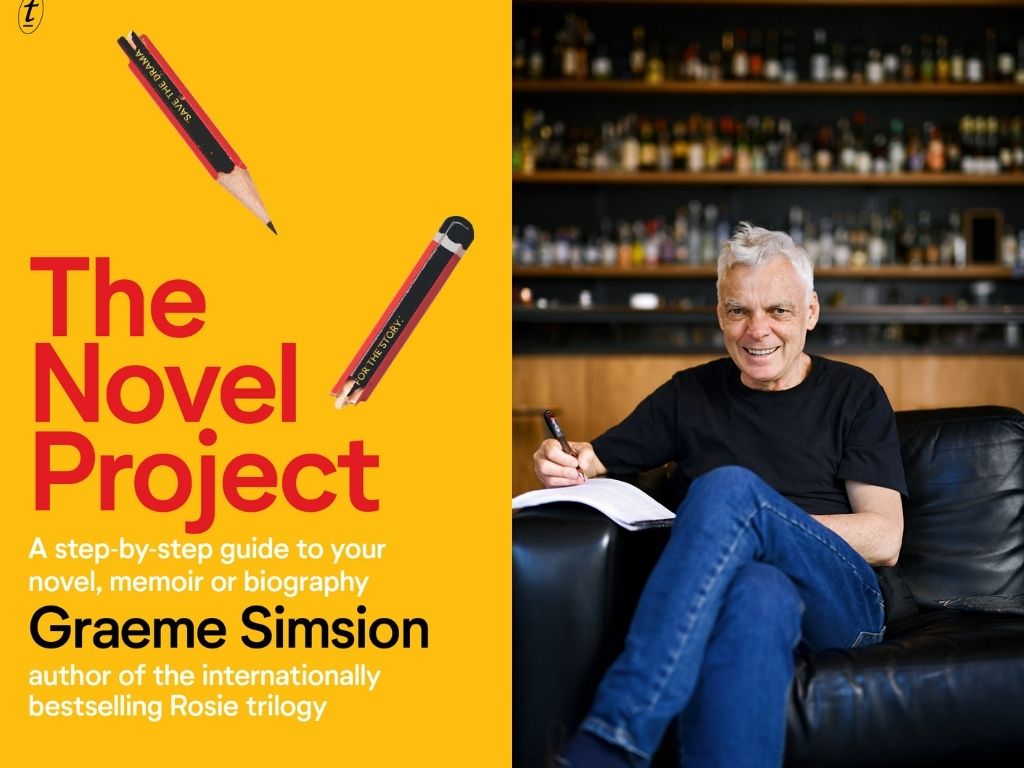 ‘Simsion suggests opening with drama, especially for first time authors, so readers are riveted from the start.’ Photo by Darren James.

If you’re one of the many people wondering if they have a novel in them, but feeling overwhelmed by the process, then Graeme Simsion has written the book for you. The author of the internationally bestselling Rosie trilogy will lead you step-by-step through it with his latest publication, a non-fiction title aptly named The Novel Project.

A couple of things to get straight before you delve in to create your literary masterpiece under his guidance – firstly, it’s highly recommended you read the third book in the Rosie trilogy, The Rosie Effect before you start on ‘The Novel Project’ as it’s heavily referenced throughout.

Secondly, this book makes no bones about being aimed at writers who not only want to be published but naturally gravitate towards being ‘plotters’ (breaking the project into methodical stages) as opposed to ‘pantsers’ (those who make the story up as they go).

It’s also not about the craft of writing prose. As Simsion says, ‘… my focus is on the writing process as a whole, in particular the development of a structure and outline, rather than the shimmering sentences.’

The Novel Project addresses the process of writing a novel in three high-level phases: planning, drafting and rewriting (including editing).

The book is broken into two very specific parts. ‘Part I: Preparation’ includes chapters 1 to 4 – Overview, Being a Writer, Creativity, and Structure, with each chapter containing further sub-sections. ‘Part II: Process’ details chapters 5 to 14 and covers topics in detail including Concept, Synopsis, Brainstorming, and Rewriting.

Simsion is at pains to make sure his readers know that although he presents the writing of a novel as a highly-structed practice, any of the steps can be modified to suit one’s preferences. He often reminds readers they’re free to break with convention but advises it to be conscious and informed. He encourages the exploration of all structure options before embracing the freedom to write it your way: confidence backed by knowledge.

Perhaps the most pertinent tip is the creation of a short premise as a first step. Simsion stresses the importance of being clear on exactly what your novel is before you devote a lot of time to it. In fact, he suggests novelists don’t start writing until they have refined this and are happy with it.

From there it’s asking yourself the big question – what’s special about your concept? Do you believe in it? At the heart of any great novel is the writer’s ability to raise dramatic questions that the reader is looking forward to having answered. Simsion suggests opening with drama, especially for first time authors, so readers are riveted from the start. Conflict and jeopardy are also crucial elements, and this can be between two characters or internally.

There are plenty of practical tips: Keep a list of ideas for stories. Think of mash-up storylines. Mix up tenses and points of view (first, second, third person) to experiment. Ask ‘what if?’ to kick off something more interesting in your story. Avoid writing anything semi-autobiographical – instead be inspired by real life people and events that you are close to so you can observe them. Simsion also lists ample external resources to investigate, including some of his own writings.

Another focus is on developing interesting characters, and the vital aspect of including a character arc or transformation. In most cases characters will be driving the story, so they need to have depth and be believable. He advocates setting up character profile documents and asking what two things your character wants most, then creating a situation that makes them choose between them: their decisions will further reveal their character.

One of the most prominent aspects of Simsion’s method is outlined in Chapter 8 (Brainstorming) and Chapter 9 (Organising the Story), which brings in the concept of the 180 physical index cards. This part is all about story generation and took him six months to complete for The Rosie Result (while working on other projects). Writers should fill the cards up with ideas without regard to story sequence and also use this time to research. Laying the cards out into Acts (1, 2a, 2b, and 3) helps visualise the problematic areas and allows you to jump from one part of the story to another within the territory of the synopsis which you have already completed at the start.

There’s great detail about the purpose that specific Acts play in any novel. For example, in Act 1 a dramatic question should be posed before the Act 1 turning point steers the story in another direction. In Act 2, complications arise, and so on. Anyone familiar with The Hero’s Journey will be aware of this three-act structure – Simsion delves into it in detail, making reference to movies and novels that readers can identify with to illuminate his points. He also emphasises that the first draft should be about maintaining momentum and creativity – quality comes third.

Although it can at times make the writing of a novel feel daunting, with so many stages to progress through, ultimately (much like his ‘Rosie’ trilogy), Simsion’s book is uplifting and encouraging – enough to prompt a visit to the shops to buy 180 index cards!