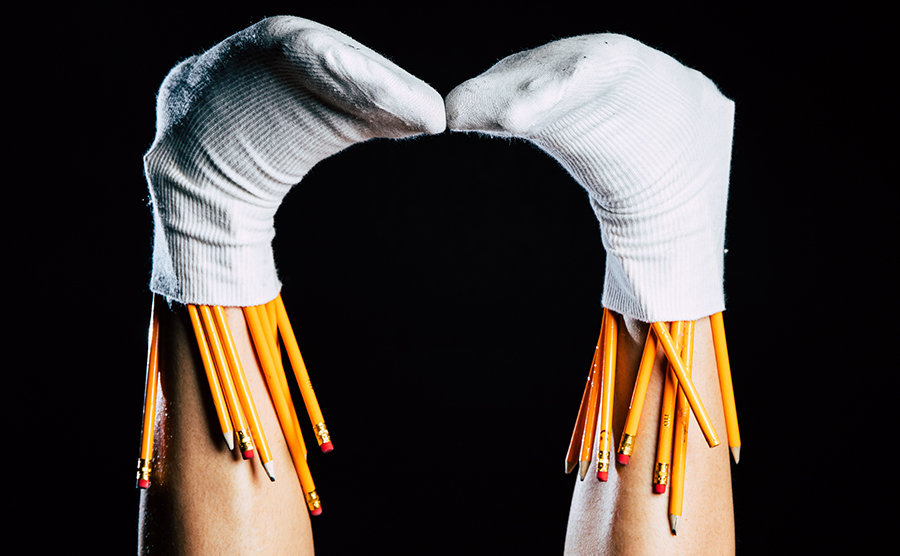 ‘I was basically studying to be an art critic before I got into circus,’ Thorburn explained via Zoom from the UK, where she is currently based.

‘I studied art history and theory and it was all very academic; all I did was write critical analysis about art and art history. My goal was to work for the biggest galleries in the world. So I got very interested in conceptual art … and I think that’s kind of how I ended up being a clown, because clowning is a kind of conceptual circus.’

Thorburn discovered circus arts while studying her Batchelor of Art History at the University of NSW.

‘When I was in art school, I started watching live music and going to see theatre, until I stumbled across the world of circus and I was like, “Oh, I want to try that, that’s cool!” I honestly got a bit addicted to it,’ she laughed. ‘And then I found out that there was a university where you could actually study circus.’

Today, Thorburn is a successful circus artist whose skills include balance, illusion, manipulation and physical comedy; skills she honed at the National Institute of Circus Arts (NICA).

Thorburn auditioned for NICA with some trepidation. ‘I thought that I wouldn’t be good enough because I started late. I was 27 when I auditioned.’

She need not have worried.

‘One of the best things about circus is that there’s a place for everyone, whether you’re an acrobat or a dancer, a juggler or a clown, a comedian or a serious contemporary performer … it’s a very encouraging and inclusive space for you to literally work to your strengths in the circus,’ Thorburn said.

All up, Thorburn was at NICA for four years, completing both the Certificate IV in Circus Arts as well as NICA’s three-year Bachelor program. One of the best things she learned in that time was how to fail.

‘I learned how to fail a lot,’ Thorburn laughed. ‘I don’t mean fail academically, I actually did quite well, academically. As a clown, I was working basically in a one-on-one capacity with my trainer Ludwig [Schukin], who was a traditional Russian clown. And so it was just me and him in the room a lot … and we would do lots of exercises where I wouldn’t be funny, and I just wouldn’t be any good. And in doing that you learn to become more and more resilient.

‘Clowning is a strange thing,’ Thornburn continued. ‘Sometimes when you fail it’s actually a better way to connect with the audience, because they realise that you’re just another human, which can be a really beautiful moment.

‘At NICA, I learned how to really connect with audiences and go out and try things in real life; to have the confidence to be able to get up and perform and just go for it. I think that was probably the best thing I learned from circus school,’ she said.

After leaving NICA, Thorburn hit the ground running, first working in New Zealand on contract and later mounting her own self-devised children’s show. She soon funded her own UK tour before studying clowning further, including at Ecole Philippe Gaulier in France, after which she worked in Japan and played in the Adelaide Fringe. Currently, she’s working with physical comedy company Spymonkey in the UK, having also recently devised her own solo show, The Thesis, which Thorburn developed in lockdown.

None of this would have been possible had she not decided to swap academia for the circus. So what advice does Thorburn have for others who might be considering auditioning for NICA?

‘Don’t be afraid that you aren’t good enough. Because I was,’ she laughed. ‘If you’re holding yourself back from what you want to do because you’re thinking, “Oh, I really want to do it but I don’t know if I’m good enough,” you may as well just get on with it. Yes, you have to be prepared for the audition, but just start preparing, because what’s the worst thing that can happen – that you get fitter and better?’

Learn more about enrolling at the National Institute of Circus Arts