How ghost lights keep the spirit of theatre alive

One of NIDA’s latest projects invites actors, playwrights, and members of the public to share their love of the theatre through an innovative, character-based project.
Richard Watts 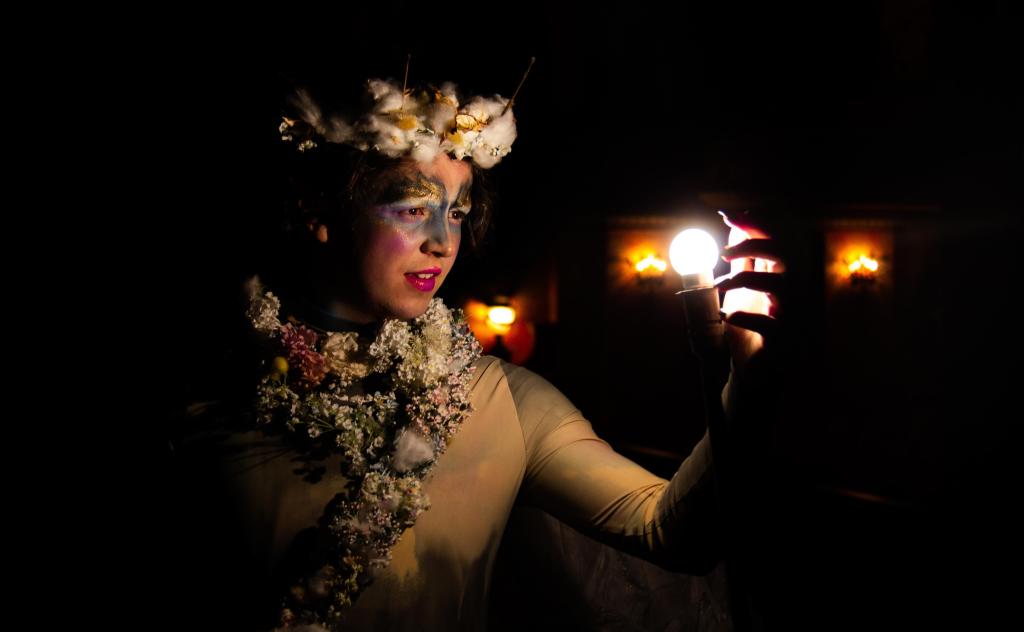 We all know what happens to audiences when they stop going to the theatre, but what happens to the characters themselves? Does Puck pine for applause when A Midsummer Night’s Dream is not being performed? How does Ibsen’s Nora Helmer pass the time when the theatre is dark – and does the lack of an audience make Hamlet any less melancholy?

Across the world, as productions ground to a halt because of COVID-19, stages remained illuminated by a single bare bulb – a ghost light. Drawing on that tradition, the National Institute of Dramatic Art’s (NIDA) Ghost Lights project aspires to keep theatre’s magic alive by exploring the lives of famous characters when they’re not performing – and the public are invited to participate.

Inspiration for Ghost Lights came in part from images of unattended landmarks in cities around the world, explains director Katy Alexander.

‘We were seeing all these amazing images of empty cities, like the Eiffel Tower and Sydney Opera House with no one around, and that got us thinking about empty theatres – where do all the characters go? That’s really where the concept came from,’ Alexander explained.

‘We keep the ghost light burning to try and keep the spirit of theatre alive when there’s no audience, but then I had this image in my head of all these characters wandering around the empty theatres trying to find their audience.’

A transmedia production staged by NIDA as part of its new, six-part Digital Theatre Festival, Ghost Lights will feature monologues and brand new words from characters such as Shakespeare’s Hamlet, Nora Helmer from Ibsen’s A Doll’s House and The Manager from Luigi Pirandello’s Six Characters in search of an author.

NIDA students, and staff such as Dr Stephen Sewell, Head of Writing for Performance, are assisting in bringing Ghost Lights to life.

‘Stephen’s given those characters their own life, beyond their play,’ said Alexander. ‘They recognise that they’re in this empty world – and not just empty theatres. They might find themselves in a props workshop or an empty rehearsal room. They’ve become self-aware and they’re also wondering “Where is everyone? And who are we?”’

KINDLE YOUR OWN GHOST LIGHT

Members of the public – especially those in love with the theatre and missing its absence – as well as actors, playwrights and NIDA graduates are invited to participate in the Ghost Lights project.

‘We figured that a lot of people out there in the theatre and film communities – and of course all the NIDA graduates – are not getting to do much work at the moment. And we’re also thinking about all those plays sitting on bookshelves and the people who want to exercise their craft at this time,’ Alexander said.

Ghost Lights participants are required to seek permission from the copyright holder of their chosen script prior to recording and uploading a monologue, unless a work is now in the public domain.

‘Of course if you’re a writer, that’s a great opportunity to record your own monologue or to encourage your actor friends to perform it. And then of course there’s the classics from right across the globe, and there’s endless things to choose from there,’ Alexander added.

Lachlan Steel, Ghost Light’s technical designer, encouraged people to respond creatively when choosing and performing a monologue to the project.

‘It’s about getting actors and performers to respond to the text in a new way now, to reflect and respond to the new circumstances we’re all experiencing. We want people submitting monologues for Instagram, which will become kind of like a curated area for people to get their work out there while we’re not working,’ he said.

Giving students access to venues like Sydney’s Capitol Theatre, and filming live – albeit while respecting social distancing protocols – means that the finished production of Ghost Lights will be a high-quality production despite the challenges of lockdown.

‘Social distancing has probably been our biggest challenge,’ Steel said. ‘A lot of what we do requires close personal contact with another person – you’re miking up an actor and capturing audio; you’re all crowding around the camera to see the screen. So it’s been those sorts of things that we’ve had to kind of re-evaluate – how do we mitigate the risks of what we do?

‘And going into the next few weeks, it’s now about how we stage a theatre production when most of us have never live-streamed one before, especially at NIDA. We do archivals, obviously, but we don’t really do anything that goes live as part of our courses. And so it’s been a really great learning experience for us all,’ he continued.

‘We’re all learning constantly about what technology there is that we can use, and how we can use it to get our message and our story out to the world.’

For Instagram, participate in Ghost Lights by preparing a monologue, record yourself performing it, and upload it to social media using the hashtags #ghostlightscommunity and #ghostlights2020.

For Facebook, NIDA’s provocation asks participants to answer the questions: What does theatre and live performance mean to you? What would it mean to be back in an audience again? Responses can be made in a variety of media: as a video response, as a poem, a photograph or a drawing. Participants may wish to describe their favourite plays and playwrights or explain why they miss their local theatre.

Don’t forget to tag a friend as well as NIDA’s page @ghostlights2020 and use the hashtags #ghostlightscommunity and #ghostlights2020. Everyone is welcome to respond and help create a community – a virtual ghost light – to keep Australian theatres alive.

Each week, all submissions go into the draw to see the final Ghost Lights performance at NIDA’s Parade Theatre.