A performance tasked with the forensic asking of questions to unpick a messy world.
Vanessa Francesca 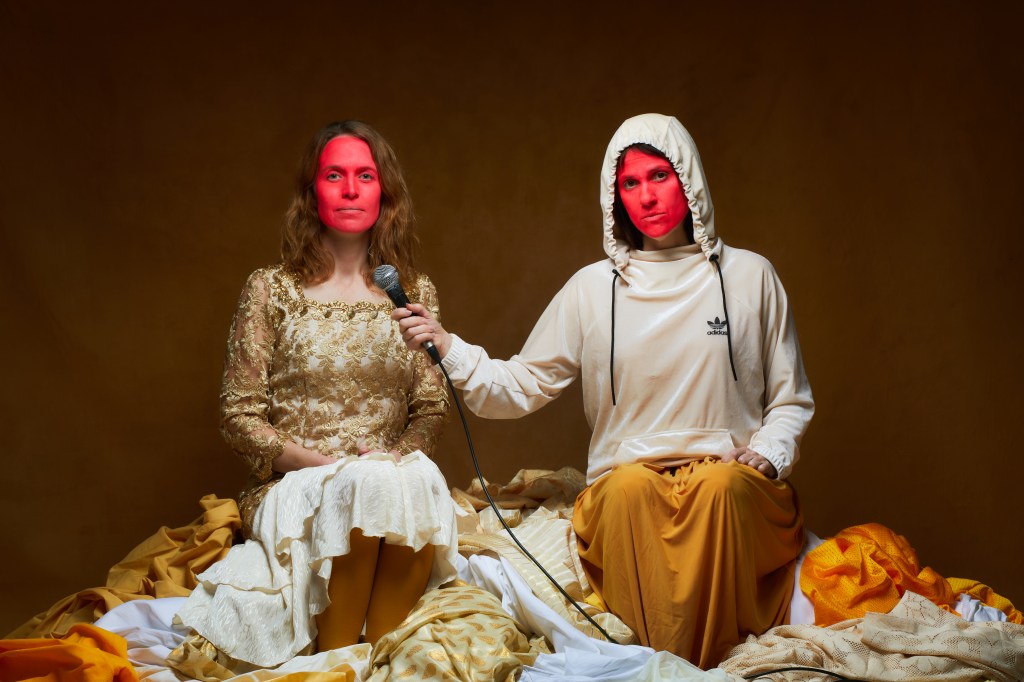 ‘Yes is a lustrous illustration of the power of script, performance, props and sound.’ Photo by Pier Carthew.

‘When the cathedrals you build are invisible, made of perspectives and ideas, you forget you are inside them and that the ideas they consist of were, in fact, made, constructed by people who analysed and argued and shifted our assumptions. They are the fruit of labour.’ Rebecca Solnit, the San Franciscan feminist wrote this in a book called Whose Story Is This?  It’s a sentiment taken to heart by The Rabble, the performance art duo Emma Valente and Kate Davis, who have been making explicitly feminist, non-narrative performance art since 2006 and have brought some of its most electrifying theatre ever to ask the question: what structures do we live inside?

The show features two women, each asking each other the same series of questions in different contexts. A changing set, the introduction of some unpredictable weather, and some well placed props and costumes ensure that in doing the show, The Rabble dramatises the uncertainty of modern times. In their own words, they argue: ‘Between the bushfires, COVID-19, The Black Lives Matters protests, transphobia and never ending conspiracy theories, the chasm between world views is literally and metaphorically widening.’

The Rabble’s Yes explores consent, alienation, feminism, trauma and despair, all while incuding jokes, costume changes, set surprises and piercing questions that cut to the heart of the audience. It is crisply acted in the sense that the main actors bring a sense of freshness and verve to dialogue with a repeated refrain. It is atmospheric, sometimes moving, and sometimes disturbing, in a visceral show that questions as much as it unsettles.

Yes is a lustrous illustration of the power of script, performance, props and sound when in the service of an idea rather than a story. In a conversation with The Age’s Kerrie O’Brien, Valente describes building the show out of a range of ideas, including Solnit’s. Of these ‘invisible cathedrals’, she says ​​’We accept them all as real and permanent, we can all see them, we can feel them … we are saying, how are they built? What if we tried to build one? Can we do that with the audience in a simple and theatrical way?’ What follows is as memorable a show as Raymond Carver’s short story ‘Cathedral’, which narrates a man describing a cathedral to a person who is blind.

If some of the world’s best performance art endures more than 15 years after The Rabble first started, it is because the form does something essential that narrative theatre never can: it strips back the façade, and shows us the beams. It reveals the spirit of a performance behind the substance of individual stories. In this case, it asks questions – about what constitutes a social situation, how we make meaning, and how we negotiate consent– that are essential to the way we live, now. This is an unmissable show, for a – yes – spiritual experience of the theatre.