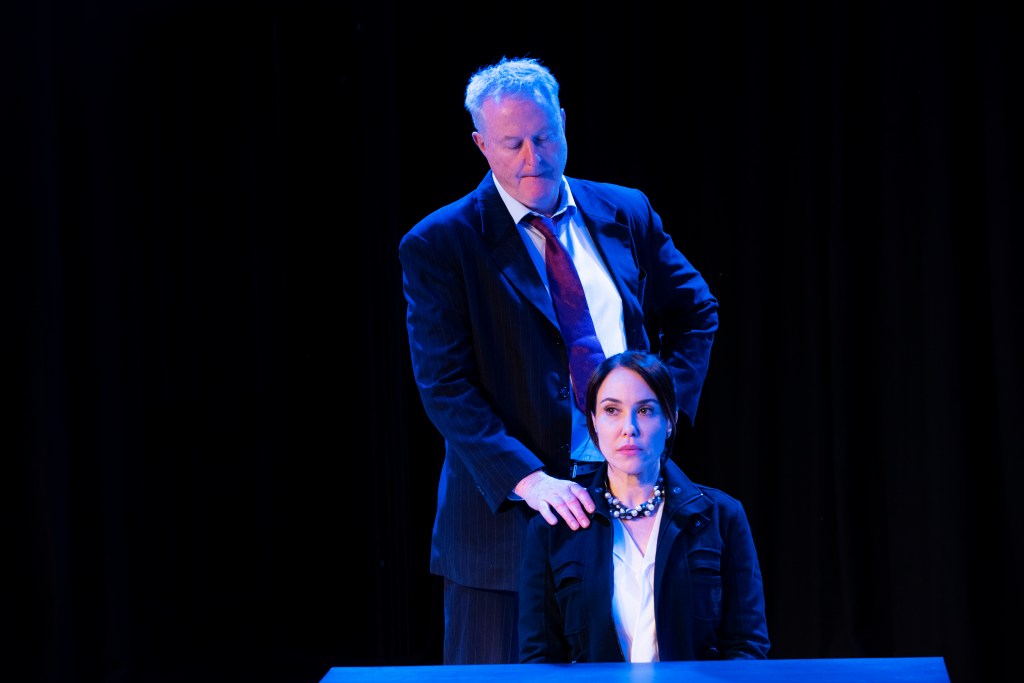 Unsolicited Male has all the ‘right’ ingredients. Its central message is laudable and well-intentioned but it’s a play of two halves that don’t quite complete each other.

This story is grounded in everyday normality, and rightfully so given the shocking ubiquity and pervasiveness of sexual harassment and assault. To achieve this, in the first half at least, there is an over-reliance on presenting the main characters through stereotypical gender tropes that feel incongruous with the story and make the characters feel perhaps too generic and everyday.

The characters feel like a means to deliver a message that this can happen anywhere to anyone, even when things start out fairly innocently, and as a result the initial context feels a little contrived.

This isn’t helped by small things like the characters’ propensity to talk to the audience rather than each other, despite them sharing a dinner of questionable intimacy, or frequently rising from the table to speak.

But this is perhaps getting ahead of things. The dinner is pivotal to the story, so at this point it’s worth taking a step back for context.

Zeke is a hapless male divorcee who still hasn’t learned to look after himself without the help a woman despite being divorced for some time. Jocular, lacking in self-awareness or simply believing that the goodness of his intention is all that matters, he convinces his PA Wendy to join him for dinner after a night working late.

Wendy is presented as a hard working and understanding woman who takes Zeke’s borderline behaviour in good humour, as she shares the belief that it’s well intentioned. This belief seems genuine, to begin with anyway, and the characters go to great pains to highlight just how innocent and well-intentioned their initial interactions are.

The dinner starts a one-thing-leads-to-another narrative told both in real time and through the next day conversations that Wendy has with her sister, Chelsea and Zeke with his life coach, Noah.

Chelsea seems to have to convince Wendy that there was something wrong with the evening, while Noah, the human embodiment of a LinkedIn Influencer promoted post, tries to rid Zeke of the exact doubts that should have restrained him the night before.

These post-facto conversations slowly but surely undermine the purported innocence and good intentions of the dinner but without the subtlety needed to maintain those intentions as a credible starting point.

These side conversations are also where the play starts to comes alive in the second half. In seeing the events that followed dinner and how they’re deconstructed, we finally deal with the sinister reality that was clearly lurking there all along. As Wendy comes to terms with what has happened to her, she rids herself of the constraints of her early depiction and stands firmly in the rage and hurt caused by Zeke’s actions.

Kym Valentine took the opportunity denied to her in the play’s first half to unleash a powerhouse performance that rendered every ounce of outrage and injustice into a visceral experience that was impossible to be unaffected by. The issues that made the first half feel didactic and inauthentic at times melted away as Valentine delivered the much-needed emotional punch and the play found a more authentic voice.

We finally got to see the additional dimension to Zeke too, as Russell Fletcher found the entitlement, the insecurity, the blindness and finally the brutality.

Unsolicited Male gets there in the end never quite overcomes the unstable base on which the story is built.

Unsolicited Male will be performed until 7 August 2022

Raphael Solarsh is writer and content designer from Melbourne.