Facing the wrath of implacable nature one timorous step at a time.
Thuy On 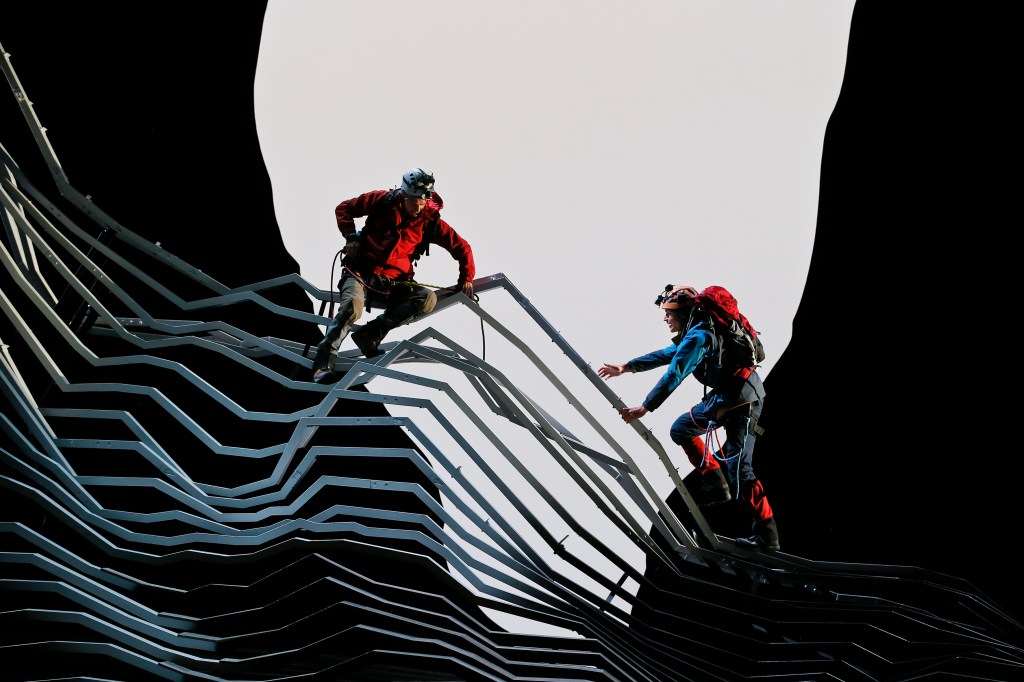 ‘A beguiling meld of realism and fantasy, hallucinations and flashbacks.’ Photo: Jeff Busby.

Based on a true story about two men, Joe Simpson and Simon Yates, trying to ascend the as-yet unexplored west face of a peak in the Peruvian Andes called Siula Grande, Touching the Void begins dramatically with one of the mountaineers spot-lit, suspended in mid-air via a rope and screaming out in the darkness. It certainly sets the scene for the rest of the play, which goes back and forth in time and plays around with a beguiling meld of realism and fantasy, hallucinations and flashbacks.

Coming to this production without having read the book upon which it is based, nor the subsequent docu-drama of the same name, means comparative analysis between the different modes is not possible, but under MTC Associate Director Petra Kalive’s hand, this theatrical adaptation holds its own against these other incarnations.

Given that most of the action takes place high up on icy mountain ranges, theatregoers may well ponder about the set logistics: how exactly did the MTC crew transform the finite space available to them into something vast and treacherous? The answer is a rather ingenious architectural construction overseen by set designer Andrew Bailey, a moveable edifice that suggests both fragility and strength and which is able to be revolved to show the different faces of the mountain.

The tight-knit team of four actors acquit themselves well. It’s a story about trust and balance, as Joe (Joe Klocek) and Simon (Kevin Hofbauer) are literally clipped to one another, each requiring the scrupulous manoeuvres of the other to gain purchase on the unforgiving rock. Add in an unexpected snowstorm and the relationship becomes decidedly strained. Special mention should be made of Klocek for his harrowing performance as Joe, the injured, dehydrated climber, dangling in the dark for hours then marooned in a crevasse and staring deliriously into the abyss. (Rehearsals for cast and crew involved attending an indoor rock-climbing centre for that added touch of verisimilitude). Hofbauer’s character is less sympathetically displayed; whether or not Simon deserves it, his actions (or non-actions) are looked upon with a harshness that seems unbefitting to the complexities of the sport.

Lucy Durack is impressive with her ballsy performance as Joe’s sister, Sarah, an outsider to the boys’ own adventure bravado of mountaineering mythologising. She’s desperate to understand the appeal of such a perilous hobby. The framing of the narrative centres Sarah, and seeing the climbers’ exploits through her eyes is an interesting device in Touching the Void, making it less a tale about men conquering nature and more about the ferocious support of a loved one providing moral grounding.

The topic of near-death at extreme altitude does not sound at all like one that lends itself to levity but Sarah’s pragmatism and Richard (Karl Richmond), the flaky, guitar-playing, quasi-philosophising base camp manager whose main job is to look after the tents (he gets dizzy in lifts) provide much-needed humour.

Kudos too, to movement director Xanthe Beesley for coordinating the actors’ bodies so the audience can vicariously feel the sheer physicality of scaling the Andes. The collusion of  lighting and sound work brilliantly to underscore this vertical choreography on icy terrain and the two intrepid explorers exposed to such elements. The ascent and the descent, the push and the pull, the precarious, frostbite-inducing conditions. It’s thrilling stuff. Sure it’s a tale of survival and endurance in extreme conditions none of us are likely to find ourselves in, but the message of hope in the darkest of places will nonetheless resonate for many.

Touching the Void will be performed until 19 February 2022