A queer retelling of the notorious true-crime case in small town America in 1892.
Dennis Clements 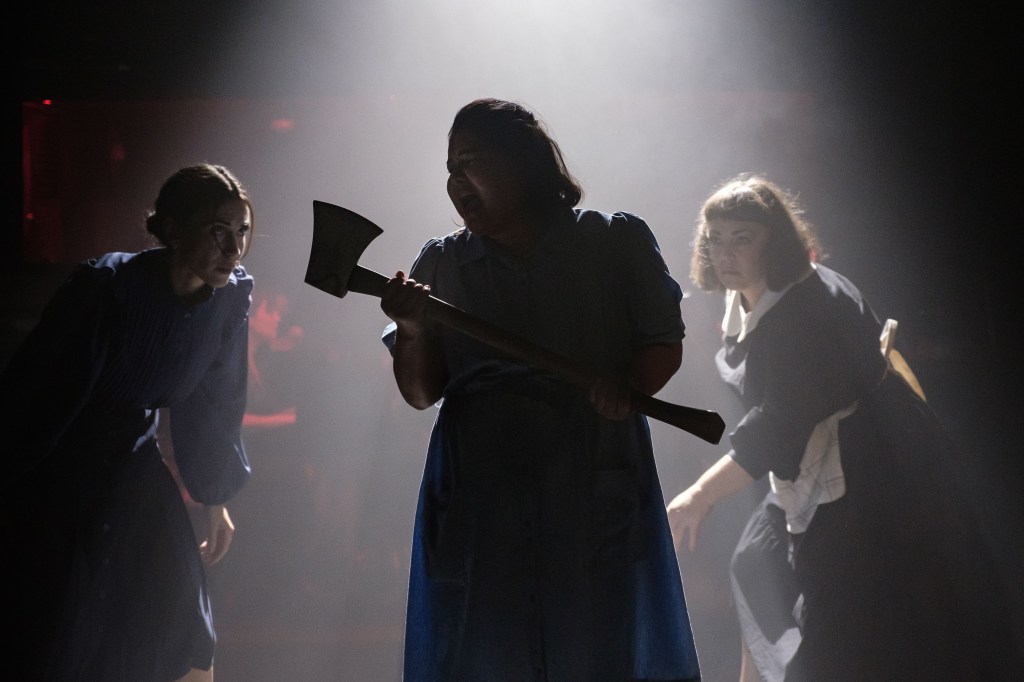 ‘It is always rewarding to see an original production of a musical work, particularly as the score has been tailored to showcase particular performers’ strengths.’ Photo by Clare Hawley

Lizzie has been billed as ‘the queer rock musical your inner teen theatre geek has always yearned for’. So, given that my teen years are long behind me, I approached this performance with some understandable trepidation.

But those fears were quickly dispelled as this wonderfully mischievous dark comedy got underway, revealing exciting scoring, clever lyrics and superb performances from the first song, and then never letting up on the quality as the evening progressed.

I am old enough to actually know the story of Lizzie Borden, and recall reciting the somewhat gruesome children’s rhyme that starts the show. The story may be more of a surprise to the current class of ‘teen theatre geeks’ but will no doubt be a delicious discovery nevertheless. Even Elizabeth Montgomery of Bewitched fame starred in a TV movie of the tale some decades ago, so the story has been around for a while. But in these crime-obsessed CSI days it is ripe for the retelling and Steven Cheslik-DeMeyer, Alan Stevens Hewitt and Tim Maner approach the subject matter with some glee and create a hard-driving score uncommon within the realm of musical theatre. But it is nevertheless a successand they are to be applauded for crafting memorable melodies and some intelligent, sophisticated lyrics. If you have ever loved flicking your hair to the Runaways ‘Cherry Bomb’ or Bikini Kill’s ‘Rebel Girl’ you are gonna doubly adore this show!

In this queer retelling, the narrative is moved to an Australian country town, and the hot remote desperation is framed beautifully by Melanie Liertz’s spare evocative design.

‘Australian cabaret royalty’ Maeve Marsden helms this production as director and it looks confident and convincing. Interested more in women’s stories than the tale of Borden herself, Marsden focuses chiefly on the relationships between these four women and the societal restrictions that hamper their freedom. The second act perhaps still needs a little more work to cement the narrative journey. Despite some compelling vocals, the story became fuzzy in moments and could do with expanding. The audience was having a great time and a few extra minutes would be both worthwhile and welcomed. But it is a minor quibble in an otherwise exciting new work.

The small company of four’s vocal accomplishment brings the music to life under the assured but whimsical hand of musical director Victoria Falconer. She also leads the tight, skilful band of five and has a brief amusing cameo to start the second act.

It is always rewarding to see an original production of a musical work, particularly as the score has been tailored to showcase particular performers’ strengths.

Ali Calder has a wonderful presence as Emma, who’s sharp and focused, while Sarah Ward shows great comic flair, revelling in the quintessentially Australian vernacular of Bridget. Marissa Saroca in the title role is intense and convincing, but fires better in the second act when she is allowed to connect more directly with the audience and wow us with her range. For me it was Stefanie Caccamo who stole the first act with flawless bell-like vocals and her warm and assured performance of Alice. Her solo drew huge applause and feels like the ‘single’ of the show. But the vocals of the entire company are uniformly superb, with closely woven harmonies and spectacular ranges.

The Hayes is a beacon for both new musical works and innovative reworking of favourites, and this production is another feather in their cap. Lizzie has been developed through their artist-led program and really feels like a show that is going places. It’s certainly one you shouldn’t miss, so don’t hesitate to mask up and pay a visit to this exciting intimate space to be one of the first to discover this rare treat of a show.