What happens when security measures fail those they are supposed to protect?
Leila Lois 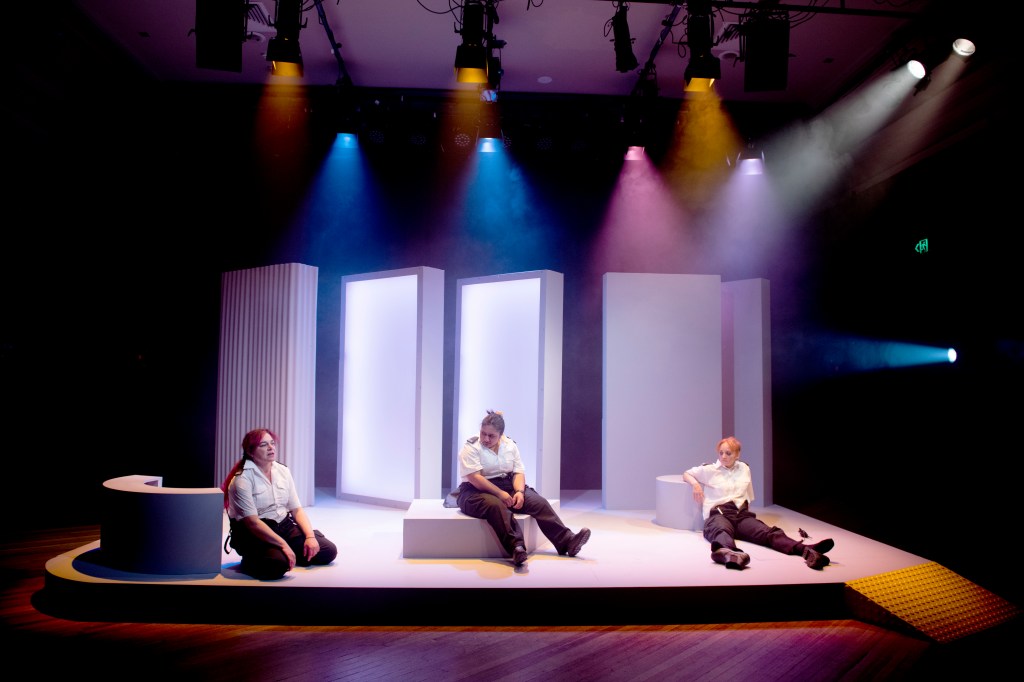 Security is a riveting, hilarious and stirring drama from an all-female cast as a part of Darebin Speakeasy 2022 season. The play exuded ‘she’s a boss’ charisma as it followed the saga of security guard trio, Katerina Kotsonis, Sina Brown and Zoe Boesen.

Playwright (Michele Lee), director (Alice Qin) and dramaturg (Emilie Collyer) made up the dream girl power team. Taking a little-explored corner of the work sector — security work — and under-voiced concerns about women’s rights in public space, the play was a fiery concoction of laughs and shudders as the characters and plot developed.

The crux of the story was a party the three guards attended, where a female client was assaulted. The assault creates a dilemma for the main character, Naz (Katerina Kotsonis). Despite the ostentatious bravado of her role at work, does she have the personal strength to confront her manager and report her colleague for assault? What untold stories of silencing and abuse have each of the women experienced that this case brings to the surface? How will they fight against abuse culture to seek the justice they never had?

The actors were engrossing in their gestures and dialogue, most apt perhaps was the character of Joey, played by Zoe Boesen; a private school raised ingénue with startlingly wide blue eyes and improbable naivety. Her monologue about the way her brother was ‘protected’ from facing up to the ways he had coerced and exploited women was telling of the wider structures that uphold abuse culture.

The dramaturgy and dialogue were excellent; kudos to Collyer and Lee respectively. All three characters had personal stories of ways in which their bodies and consent had been breached. The testimonies felt very real; they dealt with complex feelings of self-blame and betrayal. The play should perhaps have come with a more explicit trigger warning as some of the content was obviously very confronting.

There was clever use of lighting that was bright and clinical at times and obscure and muted at others to accentuate confusion. The music, fast-paced during the action, muted at the parties and dead silent at moments of intense drama was striking. The set, a white, modern warren of moving walls, hinted at concealment and crisis. Credit to Rachel Lee and Juliette Whitney for lighting, set and costume.

As the pivotal drama of whether Naz will report the assault reached boiling point, I was reminded of Lucia-Osborne Crowley’s recent book, My body keeps your secrets. Naz trembles, even begins to audibly growl as she grapples with the magnitude of her reporting the atrocity. She is writhing with guilt at the concealment of it, remembering her own experiences with violation. Joey (Boesen) vividly fantasises in one soliloquy of being ‘Thor with tits’ and defending herself against her abusers.

Tribe (Brown) seems utterly conflicted as to her own worth as she finds herself in situations where lines of consent are blurred. As Osborne-Crowley states, these things are ‘structural burdens; secrets we should never have to keep’ and yet the system often does not permit these truths of abuse, leading to internalised shame.

The play was a serious provocation to audiences to consider the ways in which we might support structural gender-based violence, and our collective duty, beyond being in ‘security’ to keep one another safe. A very thought-provoking, timely reminder by way of high-quality theatre.

Security will be performed until 11 June 2022