An iconic gothic mystery that retains – and improves upon – the flavour of its predecessors.
Nanci Nott 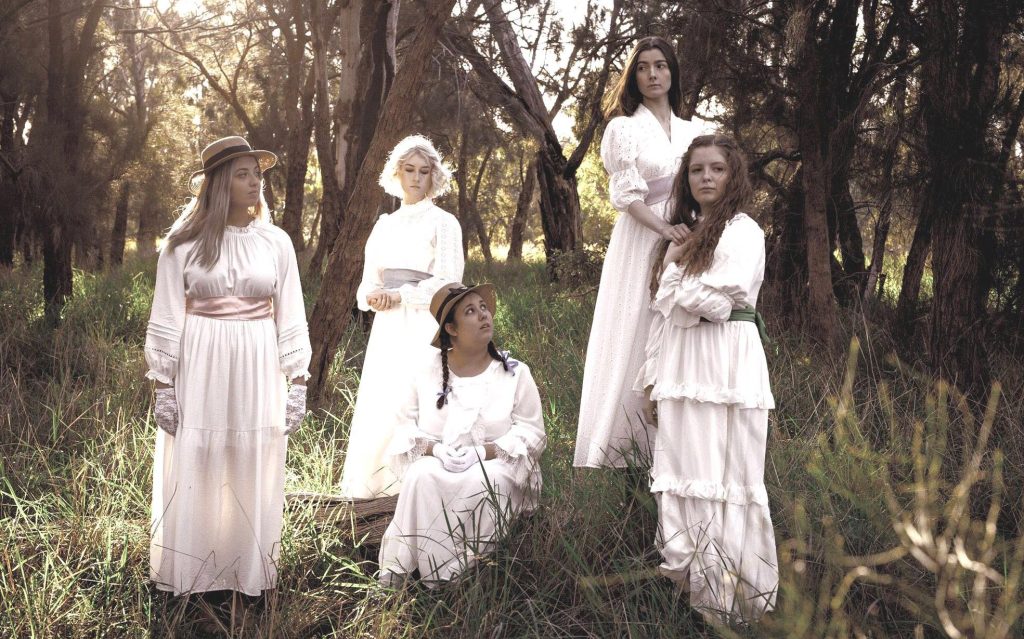 Visions in white: the outback aesthetic shows attention to detail regarding props and costumes. Picture by Gemma Little.

The year is 1900. It is Saint Valentine’s Day, and a group of white-frocked boarding school girls are reading love poetry to one another. The girls are playful, but their enacted tradition of heteronormative romance is at odds with the sapphic tone of the scene. Miranda and Marion share an overtly intimate moment, after which their peace is disturbed. Their teacher, Mrs Appleyard, warns the girls against potential dangers that could be lurking in the outback, immediately before sending them into it, on a Valentine’s Day picnic.

A short time later, at the titular picnic, Miranda, Marion, Irma, and Edith are – despite aforementioned warnings – allowed to wander off by themselves to explore Hanging Rock. Kookaburras call and cicadas sing as groups of girls sketch, sew, and sleep, sprawled across the stage. Our four explorers are alone in the bush. The mood becomes ominous as Miranda – Botticeli angel, and apple of everyone’s eye – climbs the rock, and declares that everything begins and ends at exactly the right time and place. The girls sleep.

Ostracised Edith awakes to a surreal, red-tinged scene in which Miranda and Marion expressionlessly undress, revealing their corsets and drawers. Spectral girls in ghostly gowns float like ghosts across the stage. Edith screams as the girls disappear, and the world turns blue. The story has begun…

Most Australians have heard of Picnic at Hanging Rock, whether that be Joan Lindsay’s 1967 book, Peter Weir’s 1975 film, Tom Wright’s chilling 2016 adaptation for Malthouse Theatre and Black Swan, or Netflix’s 2018 series. Now, Stray Cats Theatre Company have added their stage production to the mix. Director Karen Francis breathes fresh life into this iconic story, while staying true to its well-worn roots, delivering a vibrant production worthy of its infamous predecessors.

Those familiar with the film adaptation will appreciate the familiarity of the play’s costumes, dialogue, and soundtrack. The set design is minimalistic, aside from the multi-level, climbable Hanging Rock, which is a work of art in itself. Real native branches encapsulate an outback aesthetic, augmented by effective use of stage lighting. Attention to detail regarding props and costumes is impressive, and scene changes are relatively smooth.

Considering the old-fashioned language, ambiguous plot, and the intense emotion required in certain scenes, the delivery of this play could easily descend into melodrama. However, this potentiality is expertly thwarted by competent performances. Notable amongst the cast are Jessie Watson, who injects personality and depth into her role as Mrs. Appleyard, and Diana Joan, whose Mademoiselle de Poitiers is fabulously French. Albert Crundell and Michael Fitzhubert (Alex White and Braeden Geuer) are a suprisingly endearing duo who capture a degree of homoerotic tension, and embody how the thrill of mystery and a fear of the unknown are inextricably linked. And of course, Teaghan Lowry, Dana Brennan, and Rhiannon Francis are captivating as Miranda, Marion, and Irma.

Throughout the play, aspects of uncontrolled femininity are subtextually painted as being synonymous with the dangers of a wild, untamed landscape. Whether one sees this play as a paranormal coming of age story, or a tragedy starring men’s fear of female rage, some of the power dynamics between characters emphasise the differing gaps between types of inequality.

With a run time of 100 minutes, Picnic at Hanging Rock begins, and ends, at exactly the right time and place.