Shakespeare, but not as you know it (and that’s a good thing!)
Sarah Halfpenny 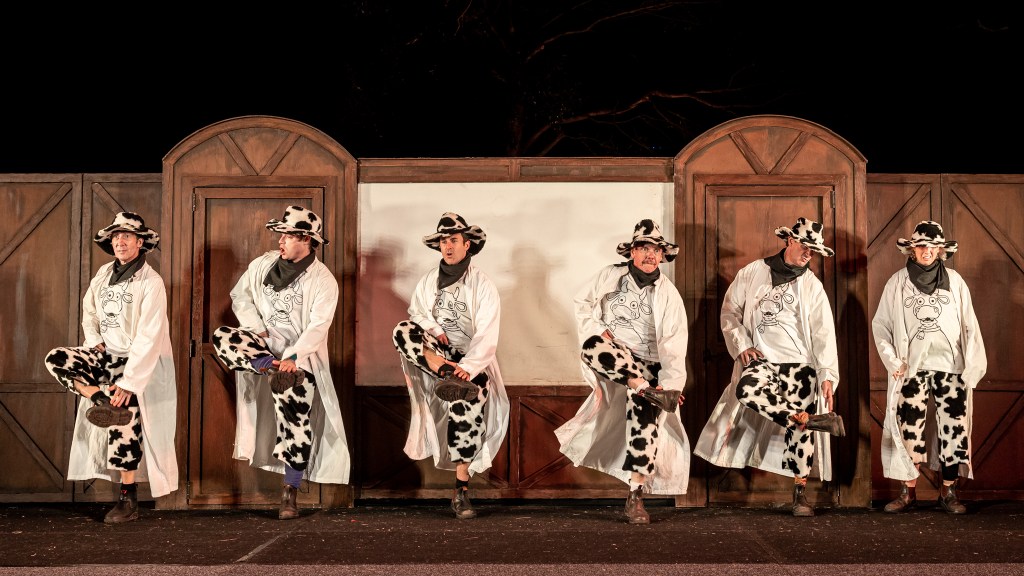 Somehow Shakespeare and Melbourne’s Royal Botanic Gardens just go together, and when you have the bonus of a warm Melbourne evening and a drink in hand, awaiting a performance from the popular Australian Shakespeare Company, then as the Bard himself said, ‘With mirth and laughter let old wrinkles come’.

The title of their latest show, Peter Quince Presents A Midsummer Mechanical’s Dream, is a mysterious mouthful, and for the first 20 minutes or so the audience is introduced to the wacky band of Mechanicals from A Midsummer Night’s Dream – Peter Quince, Nick Bottom, Francis Flute, Tom Snout, Robin Starveling and Snug. Evidently, they’re looking to mine the works of a certain playwright named ‘Bill’ in order to find the perfect play and win the right to perform for Duke Theseus at his wedding to Hippolyta in Athens.

This lead-in felt overly long and did a disservice to the actors, making them seem like a slapstick group of children’s performers. Thankfully, as the heart of the show is revealed – essentially a series of comedic vignettes traversing over half a dozen of Shakespeare’s most well-known plays – the wit and genuine laughs start coming thick and fast.

The actors are an energetic and highly talented bunch, with an extraordinary ability to play multiple roles, remember a mind-boggling amount of lines and choreography, and still improvise with hilarious results when things don’t go to plan.

With plenty of topical pop-culture and political references thrown in along the way, the audience are treated to a whirlwind sample of Shakespeare’s classics, all with a major twist. The zaniness is clear from the outset with Macbeth featuring one particularly buff (and partially in the buff!) actor stealing the limelight, wearing not much more than a red beard, an apron and riding a hobby horse. Other highlights include Hamlet set in a MasterChef kitchen, a rap version of King Lear, Romeo and Juliet reimagined as a ballet, and Anthony and Cleopatra as a musical. Such high-energy hijinks, are perfect for spectators whether they’re new to Shakespeare or well-read.

The set design is clever, the costumes and props are inventive, and the unobtrusive yet essential elements of music and lighting help complete an excellent experience.

BYO a picnic and settle in on the lawns for an entertaining night as the Australian Shakespeare Company put the ‘lit’ back in classic literature.