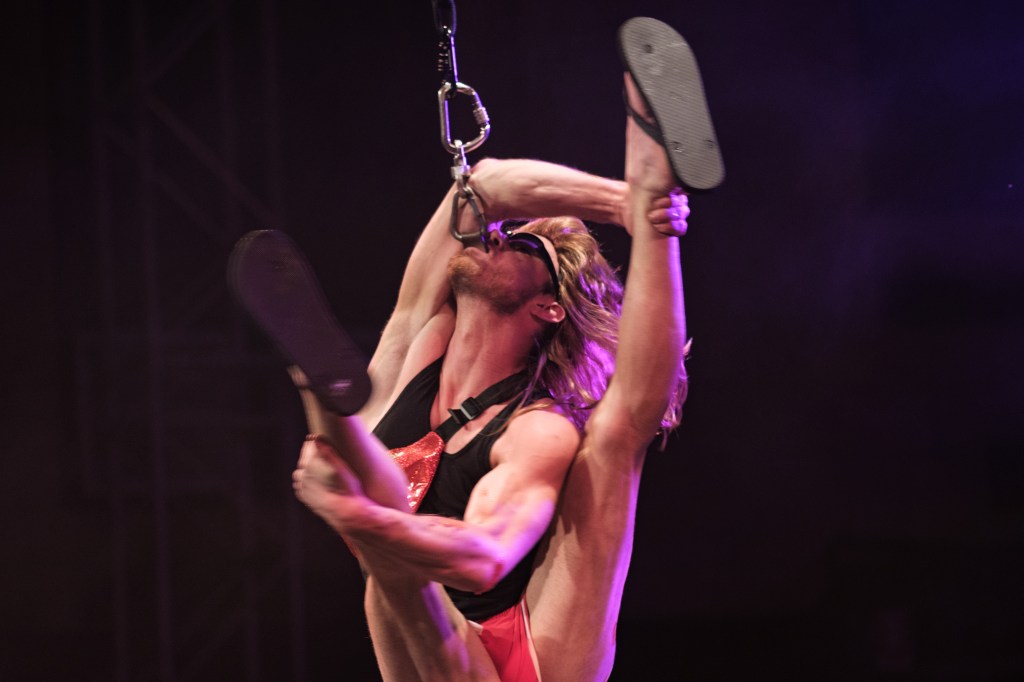 The team behind Fringe production Crème de la Crème bring to it just about everything you’d want from a late-night variety show. As the title suggests, it gathers together a selection of entertainers who, one after the other, perform highlights from their repertoire (accompanied by a pulsing soundtrack and some dramatic lighting). The show is ably hosted by Head First Acrobats – Fringe regulars who bring their sense of mischief to a range of both family-friendly and adults-only productions. Crème de la Crème is strictly the latter kind.

The performers are all unquestionably talented, confident in dealing with lively crowd feedback, and have been well-chosen to suit an audience who, by that hour aren’t looking for subtlety so much as a good mix of classic circus favourites – aerial acrobatics, magic tricks, diablo and hoop routines – and abundant opportunities for broad humour.

This is not to suggest that the performances lack originality. The aerial routines, in particular, were some of the best that I’ve seen this Fringe season (it was certainly the first time I’ve watched someone literally hanging on by their teeth). In the midst of what was a fast-paced, high-energy highlights reel, a shadow puppet display provided an unexpected and rather charming interlude. Even the more obnoxious comedians won me over eventually with their self-assurance and sheer commitment to the act. Once you get into the spirit, you can’t help having a good time.

As much as there was to delight in, there was also plenty to cringe at, and the performers were keen to provoke strong reactions (you should see your faces, we were gleefully told on several occasions). Most of the audience watched MC Cal Harris’s COVID-themed segment involving a balloon and an unorthodox testing procedure through half-covered eyes. The nudity, too, was played mostly for laughs (and shrieks). As talented as everyone is, it’s not a show that takes itself too seriously.

Crème de la Crème works best when you go into it willing to commit to the spirit of the evening. The more you put into it (with frequent applause, cheering, groaning, or whatever else is called for), the more everyone is able to enjoy themselves. It’s a show in which the audience and performers are united in a desire to be part of some straightforward, in-your-face fun.

Crème de la Crème will be performed until 19 March 2022