Two 1950’s enthusiasts discover that the golden era they adore and seek to emulate may be harder to maintain than expected in this relatable STC production.
Justin Clarke 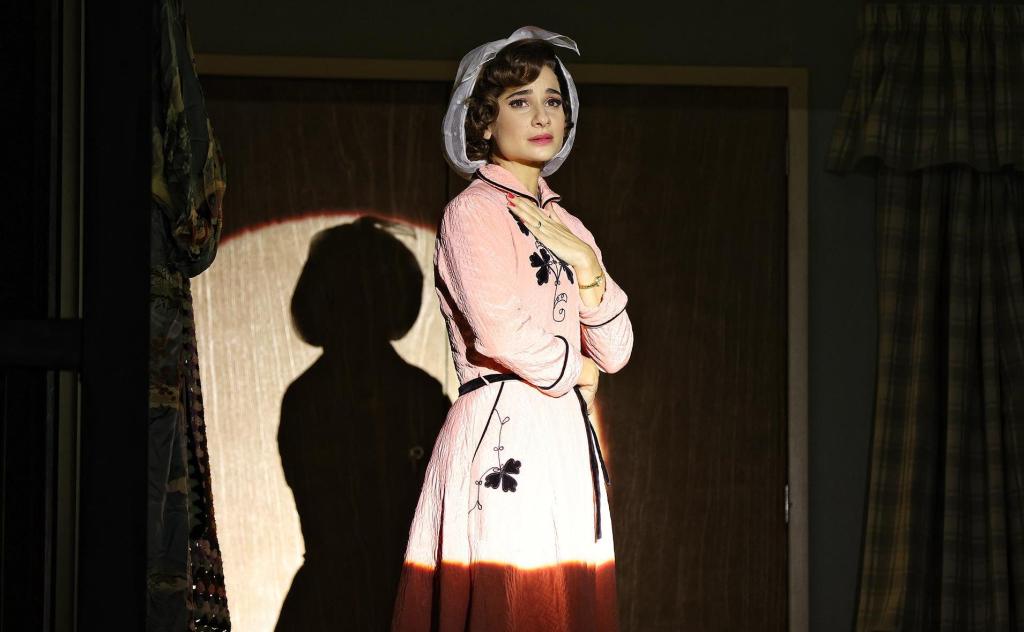 The term ‘nostalgia’ has become very much a marketing strategy in today’s world. When so much is uncertain and unknown it seems sane to want to slip back into a golden era of the past. The word ‘nostalgia’ comes from the Homeric Greek nostos meaning ‘homecoming’ and algos meaning ‘ache’ or ‘pain’ – in essence, nostalgia was once considered something more akin to a sickness than an identity or new fad. Sydney Theatre Company’s production of Home, I’m Darling aims to focus on the former, channelling the ‘nostalgic’ era of the 1950’s in the Sydney Opera House’s Drama Theatre.

Laura Wade’s Home, I’m Darling focuses on couple Judy (Andrea Demetriades) and Johnny (Anthony Taufa), two 1950’s enthusiasts who are currently exploring an experimental way of life by swapping 21st century living for perfect pastel bathrooms, mid-century knickknacks and the smell of good old fashioned home cooking. In short, the pair are hiding away in their own nostalgic fantasy.

Judy’s empowered feminist mother Sylvia (Tracy Mann) and best friend Fran (Chantelle Jamieson) are concerned, while Judy’s insistence on preserving this lifestyle is tested by Johnny’s new boss, Alex (Kirsty Marillier) as well as by the cost of living in a 50’s bubble and the knowledge that perhaps this era of nostalgia was more dystopic than idyllic for most.

Director Jessica Arthur creates a layered production that fools its audience at first into thinking that they are watching something akin to I Love Lucy – until an Apple computer is pulled from a cupboard drawer. Just as Marvel’s WandaVision dealt with hiding in an idyllically nostalgic fantasy world to disguise trauma and grief, Arthur skilfully establishes that Judy and Johnny, while seemingly impossibly happy, are living a lie that will be impossible to maintain.

Arthur has directed an impeccably choreographed production that on the surface presents as a fluffy comedy, however a closer look at the script reveals an exploration of the lies we create to hide our own fears and insecurities, and the lengths one will go to to bury them.

Together with designer Genevieve Blanchett, Arthur has produced an outstanding set and costume design that more or less steals the show. From the 50’s fridge to the disgustingly pink pastel bathroom, Blanchett’s set is both real and somewhat false at the same time. While the setting for the production immediately evokes an American comedy, Blanchett’s keen eye for detail takes in the very structure of the property, an English Garden City suburban home.

Blanchett’s immaculate costume design ranges from 50’s housewife to debonair debutante and features multiple costume changes for Demetriades, who as the optimistic Judy is the production’s heart and soul. Sporting a smile that feels ready to shatter at any moment, she chews through Judy’s dialogue, landing the comedy with expert timing and bringing Judy to breaking point just as it seems her nostalgic bubble is about to burst.

The show’s most powerful moments come from a frighteningly relevant discussion regarding Fran’s husband, Marcus (Gareth Davies) and his interactions with a female colleague – a future scene of desperation becomes bone-chillingly close to reality and is expertly played by Demetriades.

Playing Judy’s waited-on husband, Johnny, Taufa revels in the comedy of his character, revealing his mixed emotions about the experiment his wife has led him down. For the most part, Taufa is outacted by his counterpart, as he struggles to fully project himself into the space of the Drama Theatre which at times swallows up his character.

Laura Wade’s script poses many juxtapositions between feminism and nostalgia, most of which are embodied in the supporting cast. Mann’s Sylvia chews through an outstanding second-act monologue regarding a woman’s place in the 50’s in an attempt to snap her daughter out of her fragile bubble. Jamieson’s Fran, while mostly monotone throughout, provides a conflicted character who wants to support those around her – she speaks to women today when it comes to the line drawn when needing to stand by one’s husband. And in direct contradiction to Demetriades’ Judy, Marillier’s Alex bursts through the scenery in confident form as Johnny’s new boss – causing waves in Judy and Johnny’s fragile lifestyle.

Home, I’m Darling discusses the idea of fear in a world where the unknown is prevalent for us all, however Arthur struggles to maintain the dramatic tension needed throughout to make this impactful: by not forcing its characters to breaking point, the production never completely creates the emotional power to which it aspires.

The production itself serves as a relatable piece of theatre in an uncertain climate, offering its audiences a message that perhaps hiding away in a fiction may not be as tranquil as it seems.

Justin Clarke is an actor, writer, teacher and European tour guide. Raised in Western Sydney, he always had an avid love for theatre and the spontaneous. This led him to seeking a career in drama teaching which saw him teaching in the United Kingdom for three years, where he nabbed himself a cheap West End ticket every weekend he could. Being a Drama and English trained teacher, Justin has developed his writing for publishers such as Theatre People and ArtsHub. Justin’s past theatre credits include directing Stiles and Drew’s Soho Cinders, the ‘brave’ Sir Robin in Spamalot for Arcadians Theatre and the French Taunter/Tim in Spamalot for Springers UK, ensemble in Footloose and Pirates of Penzance and his debut role as Muldoon in Jurassic: That is One Big Pile of Musical which took out the audience favourite award in the Sydney Fringe Festival 2015. As the years have gone by, Justin has taken a great interest in swallowing as much theatre as he can and bringing it to the masses.