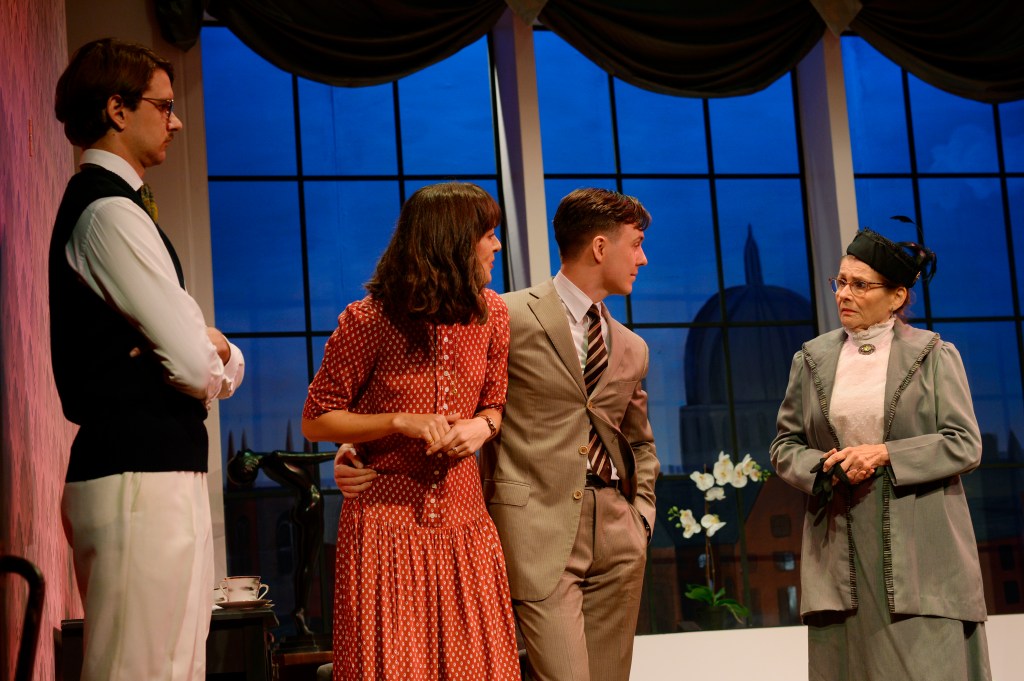 ‘It is possible that the play’s satire of the prurient interest people take in infidelity has staled a bit since 1927, when the play first opened.’  Photo by Craig O’Regan.

Noël Coward’s Home Chat opens with Paul awaiting his wife Janet’s return from France. Paul is a novelist of apparently slight success (though this is difficult to square with the fact that details of his personal life make the front pages of the London press). He soon learns that Janet has been involved in a train accident and, although she is perfectly fine, the circumstance reveals the scandalous fact that she was staying in a sleeper carriage with her friend Peter.

On their return to London, Peter and Janet find themselves confronted by the suspicion of their family and loved ones. Outraged by their lack of trust, Janet decides, apparently spontaneously, to pretend that she actually is having an affair with Peter. Peter goes along with it. This might seem odd, particularly as Peter seems genuinely in love with his fiancé Lavinia (at least compared to Janet’s ambivalence towards her husband) and the pair have made no serious attempts to deny the supposed affair before falsely confessing.

Perhaps the best explanation for this behaviour is Janet’s dismay that her loved ones are more concerned about the affair that they are about her safety having been through a traumatic experience – several people died in the train crash – but the dramatic logic of this is undermined by the fact that neither Janet nor Peter seem particularly bothered by it either, much less traumatised. It is not quite clear what Janet hopes to achieve through her subterfuge, apart from upsetting husband, mother and mother-in-law, and she admits as much to Paul’s friend Alec.

Ultimately, my enjoyment of the play was hampered somewhat by the fact is a bit hard to care about what happens to any of the characters, who are all fairly unlikeable and acting in bizarre ways. Is Janet’s behaviour really a rebellion against social mores or has she suffered a concussion in the train accident? We may never know. It is possible that the play’s satire of the prurient interest people take in infidelity has staled a bit since 1927, when the play first opened. On the other hand, it was not warmly received then and Coward himself ultimately decided it was not one of his better plays. In the great man’s own (uncharacteristically modest) words, ‘it was a little better than bad, but not quite good enough, and that was that’.

This is a shame, because the Genesian Theatre, a beautiful converted church on Clarence Street in the CBD is a lovely venue for the play and the set design by Tom Fahy is beautiful. The cast all delve into upper London society with gusto. Perhaps the best chemistry is between Jenny Jacobs, who plays Janet’s mother Mrs Chillham, and Lois Marsh, who plays her mother-in-law Mrs Ebony. They have most of the best lines and pull them off with impressive comic timing.  This all makes for a diverting evening but it might have been even more diverting had these elements aided one of Coward’s better plays.

Home Chat will be performed until 12 December 2021