Trent Dalton's bestseller hits the stage in a meticulous adaptation that explores its light and dark themes.
Suzannah Conway 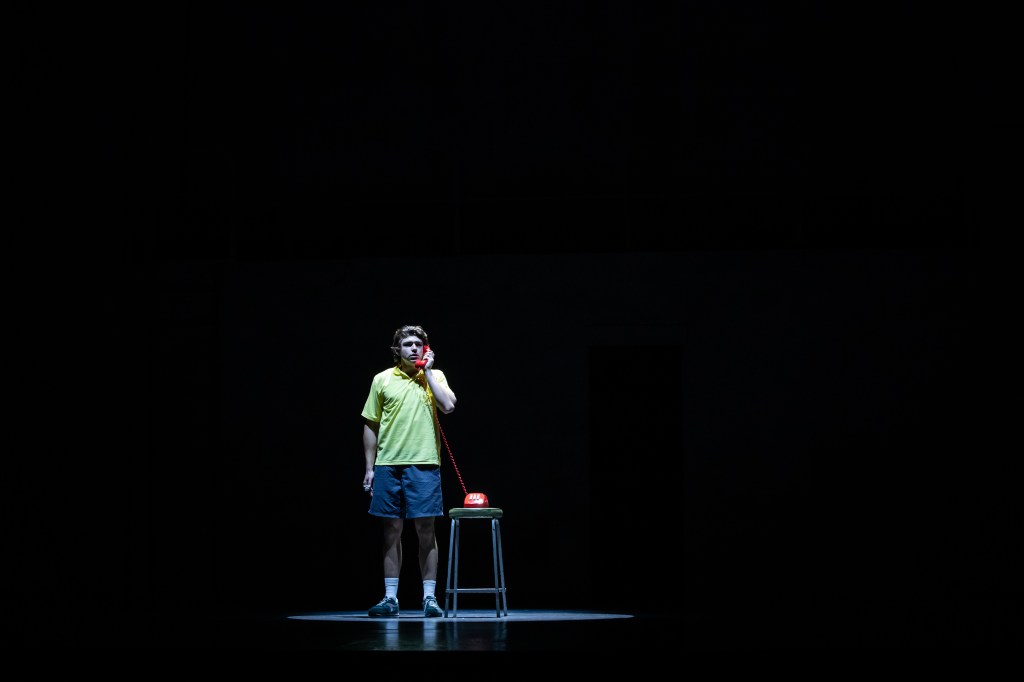 Queenslander Trent Dalton’s acclaimed first novel, Boy Swallows Universe, based on his early life, has been brought to the stage in a thoughtful, clearly meticulous adaptation by Tim McGarry. McGarry left no theme unexplored and no nuance of character unconsidered. His was as faithful a rendition of this book as would seem possible, especially given the novel’s sprawling nature and length (471 pages), its complex themes and both its dark and seamy side as well as moments of fantasy and dream-like unreality. McGarry managed to interweave the book’s many episodes into a tight linear structure linked by well-written dialogue, and assisted by a fluid production design and a fast-moving production.

Set in the Brisbane suburbs of the 1980s, the production design was exquisite, cleverly positioning the many scenes in known venues and places. Renée Mulder created a wide-open space, extended to the theatre back walls, which are used to project images and video of places, including the Brisbane Town Hall clock-tower, various house exteriors, Boggo Road Gaol, The Courier Mail offices and a realistic train journey. The set was simple, consisting of a centre revolve with many smaller props, and minimal pieces of furniture and car seats, to keep the action flowing. Video Designer, Craig Wilkinson, has impressively recreated photographic images that fit the walls and floor perfectly, giving a 3D effect, with diverse rainbow and multi-coloured backdrops for the fantasy images such as the moon pool.

In conjunction with Ben Hughes’ imaginative and spectacular lighting design, there were magical scenes, including a deep, blue-washed stage with a star-studded sky and full moon; an image of lapping water on rocks in the Brisbane River when Slim is fishing, and a sombre rain sequence for Slim’s funeral.  Hughes and Wilkinson also used a spreading dark cloud to suggest something bad was in the offing alongside projected images of the characters to bring them more sharply into focus.  The production was greatly enhanced by an atmospheric sound palette composed and designed by Steve Francis.

Sam Strong directed the production and actors at a fast pace which, initially at least, created some difficulties in distinguishing the various characters, especially the father figures in Eli and August’s lives. Perhaps there was an expectation that everyone had read the book and knew the story. But it certainly helped having Eli’s character as the narrator. The pace did settle down from the many short scenes in Act I with musical interludes that explained little, and the second half of the play had a much stronger rhythm with a flowing narrative that was considerably easier to follow. Strong used a choreographed slow-motion device in the more violent action scenes that worked exceptionally well. His character direction and management of the artists were exemplary.

The actors were overwhelmingly impressive and worked well together as a strong cohesive team in this tight-knit production.

The protagonist, Eli Bell, played by Joe Klocek, was exceptional and very well cast. He had an easy manner, carrying the weight of most of the play, while his journey from a gauche 12-year-old to a know-it-all teenager embarking on life as a journalist, was well realised. Scenes such as his going to Boggo Road Gaol to rescue his mother, managing Slim’s death and funeral and interactions with his brother and father, were all well-crafted and communicated.

As his brother, August, Tom Yaxley managed to be both mute and articulate most credibly. His was a wise character, more intelligent than his years.

Michala Banas made a marvellous Frankie, the boys’ mother. She was totally believable in her complex role – abused as she was by drugs and men, but still devoted to her children. The men in her life, husband Robert Bell (Matthew Cooper) and boyfriend Lyle Orlik (Anthony Gooley), while being failed human beings on many levels, did offer some redeeming features and their complexities were well explored and delivered. The third man, Teddy Kallas, was played with much gusto by Andrew Buchanan as a violent brute.

Anthony Phelan took on the double roles of Slim Halliday and Tytus Broz. He played Slim, the convicted killer who looks after the boys, as a gruff ex-con with a heart of gold. The character imbued his own philosophy and sense of morals into Eli and, to all intents and purposes, was the father figure that the young Eli needed. Phelan offered a powerful performance that was perfectly nuanced. He was also suitably controlling as the drug lord, Tytus Broz, and personified the complete evilness of the character.

Ashlee Lollback was a charming Caitlyn Spies, the young journalist with whom Eli falls in love. Ngoc Phan played the local drug dealer Bich Dang with venom, and her son, Darren Dang, Eli’s friend and confidant, was ably created by Hoa Xuande – though his exaggerated Vietnamese accent could be hard to decipher.

Mention must also be made of Anthony Gooley’s wonderfully realised Courier Mail editor, Brian Robertson, one of the funniest sequences in the play. Perhaps the best way to sum this production up is by emulating the requirement of Brian Robertson, who asked Eli to tell his story in three words. Those become, of course ‘Boy Swallows Universe.’  For this writer perhaps it would be ‘critic praises play.’