An intimate journey between memory and reality, where the personal meets the political, is a quiet triumph in contemporary storytelling.
Jo Pickup 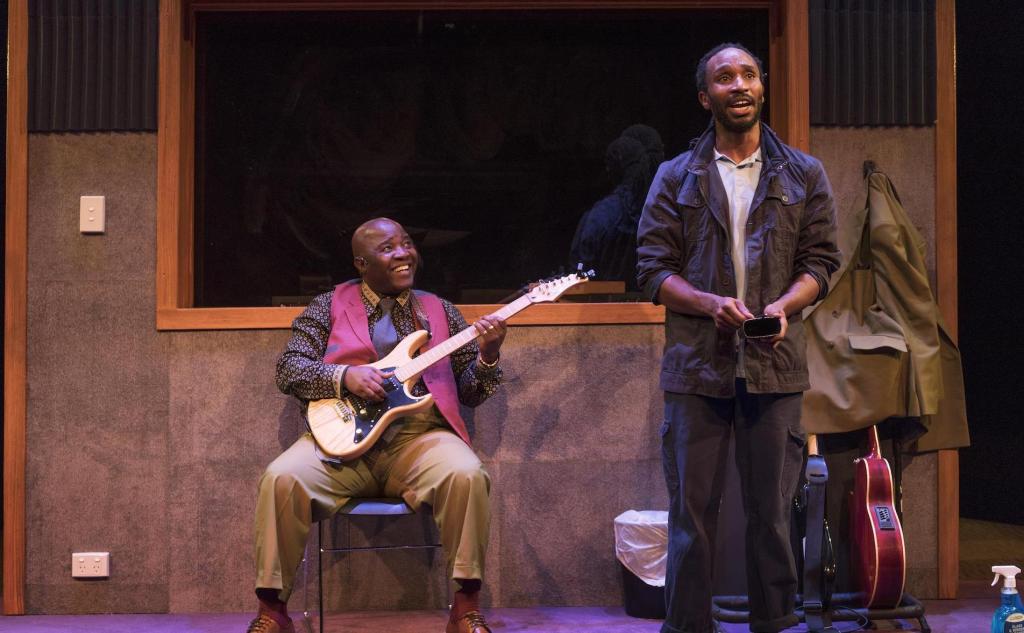 A man lugging a heavy cleaner’s vacuum pack walks into a small music studio that is strewn with beer bottles, chip packets and other grubby stuff left behind by the day’s recording artists. ‘Musicians!’, the man sighs at the sight of it all.

He is there to clean up this mess – to clear away the rubbish and wipe away these remains.

This setting, with its reference to both the language of music and the messiness of the past, serves as a poignant metaphor for the evening of storytelling that is about to unfold.

WA based Kenyan born writer and performer Mararo Wangai is the core artist behind this beautiful new work, and he plays the central character – the cleaner of the music studio that night.

Wangai may be known to WA audiences for appearances in works by Black Swan Theatre (Unsung Heroes) and The Last Great Hunt (Improvement Club), though Black Brass marks his first full length work as a playwright, and it is a sophisticated debut achievement.

The play’s protagonist is a recent arrival to Australia from Africa, and while he never speaks his own name (but which is listed in the program as ‘Sleeper’), he gives voice to some of the joys, sorrows and difficult truths of contemporary migrant experiences.

These experiences are nudged out of Sleeper’s subconscious by a mysterious companion ‘Trumpet’, played by composer and musician Mahamudo Selimane, who never says a word, but continually plays his electric guitar and spontaneously cries out in magnificent song. After Sleeper’s initial bewilderment at Trumpet’s arrival (“who are you?”, “you can’t be here!”), he realises that Trumpet will allow his imagination to venture into surprising territory, where past events and emotions can resurface.

A series of intoxicating African music (featuring lyrics in Swahili, Lingana, Shangana among others), helps to drive the narrative forward, and while the music is primarily performed in a cool, assured style by Mahamudo Selimane, the two men often sing together creating soulful harmonies which, in their elevating tones, evoke the exquisite diversity of the African diaspora.

Ultimately, Black Brass simmers with poetic subtleties and sophisticated layers of meaning that linger in mind long after its 60 minute duration. That said, the live performance by Wangai and Selimane, who give their all to the stage and story, is also very moving.

Crafted and developed under the guidance of Performing Lines WA, directed by Matt Edgerton, with superb lighting states by Lucy Birkinshaw and a clever set designed by Zoe Atkinson, this heartfelt work is a credit to the entire team (but especially Mararo Wangai) whose steady, collaborative efforts have allowed it to shine. Here’s hoping this premiere season is just the beginning for this impressive new work.