WA's longest-touring independent theatre work is storytelling at its simplest and its best.
Jo Pickup 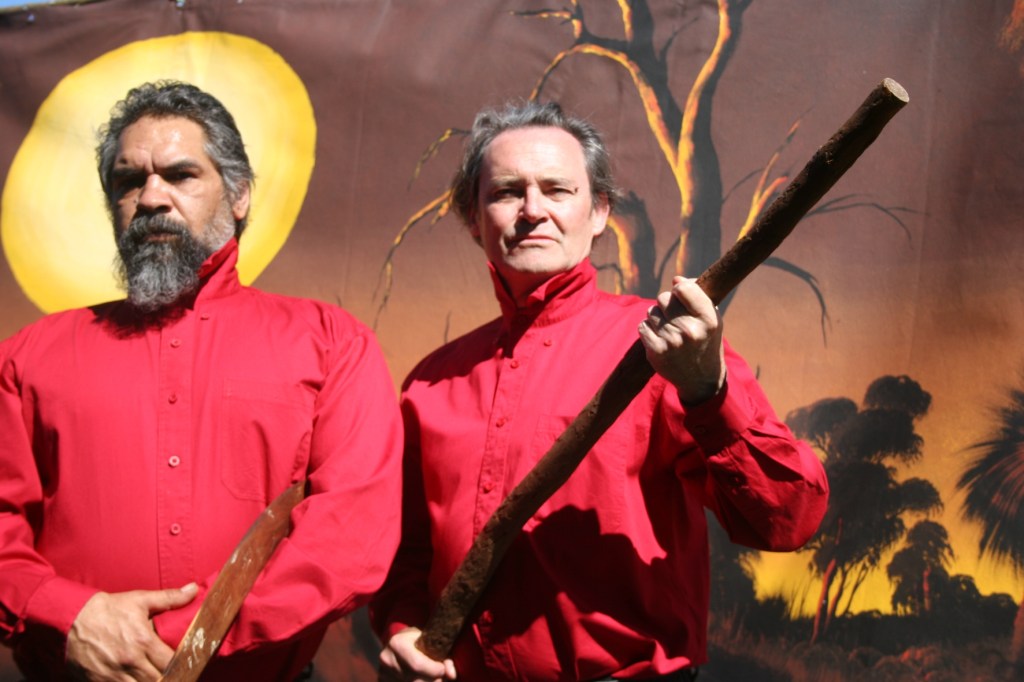 Kelton Pell and Geoff Kelso travel through time and space in their storytelling. Picture supplied.

*Indigenous readers are advised that this piece contains names of deceased persons.

However small or large, live theatre shifts your consciousness. After seeing the work Bindjareb Pinjarra surrounded by a near full capacity house at Black Swan Theatre’s inaugural Maali Festival, these changes felt profound.

Bindjareb Pinjarra was created in 1994 by Western Australian theatre makers and actors Geoff Kelso, Trevor Parfitt (now passed away), Kelton Pell and Phil Thomson. At its heart, it’s the real-life story of an 1834 massacre of Nyoongar people by British colonial military forces in an area in the South West of WA.

Watching this free, one-night only performance among a diverse crowd of families, elderly couples, hipsters and more, it’s a testament to how deep no-frills storytelling can go. Six actors, four chairs and a lot of history in store, this play’s simple presence masks the weight of its end.

Under the dappled light and with Nyoongar artist Tjyllyungoo Lance Chadd’s earthy bush backdrop, actor Phil Thomson ambles in and says they’re running late (actor Kelton Pell is in the dressing room with glue on his hands).

‘Sorry, Kelton’s just fixing his shoes, and the glue’s gone everywhere… Our shoes are pretty worn-out after 27 years of doing this show, y’know?… Sorry… he’ll be out in a minute.’

Pell arrives shortly after and the audience goes wild. Then he and Thomson set the scene of things to come.

The truth is that neither knows exactly what’s in store, because this is a play with no written script. In-keeping with Indigenous culture, the producers keep it in organic oral form, and aside from two A4 pages with a few basic notes, it’s never been written down.

Its structure is built around improvised scenes which also breaks the fourth wall. It hinges on a history-story not well known, but it’s also a stunning reminder of the complex present.

We watch as its six male performers (which for this performance were Geoff Kelso, Sam Longley, Kelton Pell, Phil Thomson, Frank Nannup and Ian Wilkes) journey through time and space. They swing in and out of character sharing personal stories and feelings toward the past. It’s both heart-breaking and hilarious – which you’d never guess could work together, but they do.

They move wonderfully together through the plot’s many twists and turns. The nuanced physicality of Sam Longley and Ian Wilkes proves a particular treat. Wilkes (a trained dancer), brings grace of step to the work’s protagonist (a young rapper named Roland Mission), and is a magnetic presence.

Together, these six performers take us on hysterically wild rides including the Centrelink office as a day at the circus, and a series of punchy public transport commutes. They have us in stitches, but their meaning runs deeper than their comic construction, as we become active in their search for complex truths.

At one point actor Geoff Kelso turns to us and explains, ‘We can’t tell you exactly what happened that day, we can only use evidence we’ve found…You can investigate it more for yourselves.’ And we should.

So yes, this play is a history lesson you never learned in school, but it’s much more besides, and in achieving this feat, Bindjareb Pinjarra deserves to be shown for many years to come (and please, can we think of a way to make more of them free?)