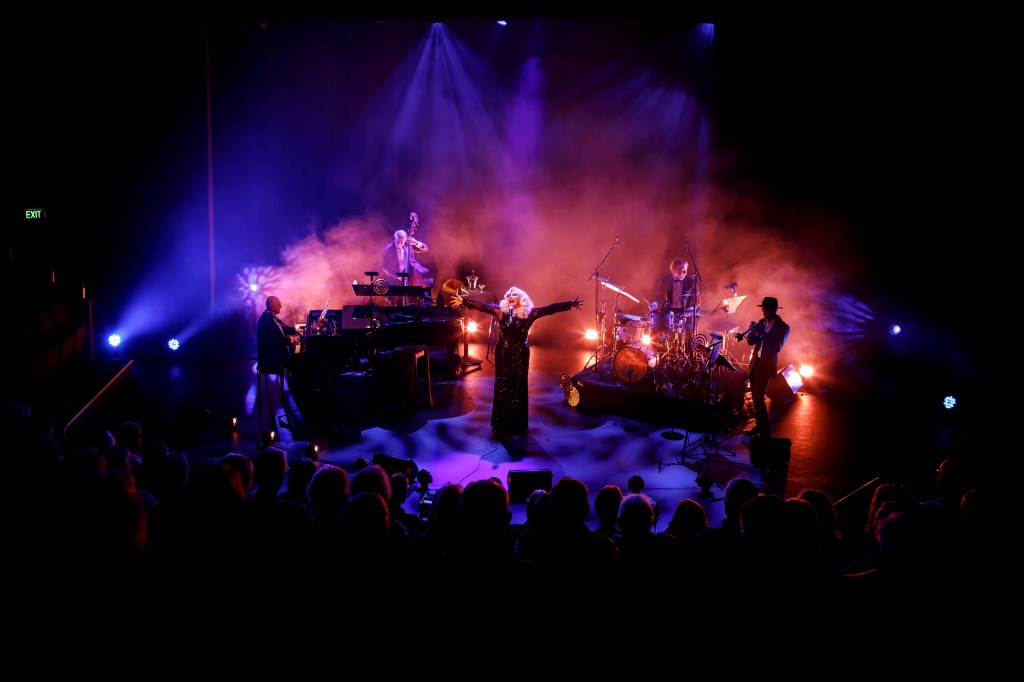 Beloved entertainers Phil Scott and Catherine Alcorn have come together for a riotous night of music and comedy in their show, 30 Something. Taking us back to New Year’s Eve, 1939, the colourful pair and their band celebrate the end of a decade with fresh takes on classic cabaret favourites and jazzed-up versions of more recent pop hits. With Alcorn’s powerful voice alongside spirited piano accompaniment from Scott, some fabulous costumes, and plenty of broad humour, this is glitzy, high-energy fun.

The pair’s repertoire strikes the right balance between the familiar and the unexpected. Classics such as ‘Lulu’s Back in Town’ (reworked with the names of our hosts) and ‘Puttin’ On the Ritz’ evoke early 20th century glamour, while the Depression-era song, ‘Brother, Can You Spare a Dime?’ is a reminder of the harsher reality of life in the 1930s. And then, just as the opening of ‘Boogie Woogie Bugle Boy’ conjures the shadow of World War II, the song transforms into Lady Gaga’s ‘Born This Way’. Along the way, Alcorn and Scott step back in time with Kylie, party like it’s 1939 with Prince, and immerse themselves in a seedy underworld via Coolio’s ‘Gangsta’s Paradise’.

As a musical duo, the two are a good match. Flamboyant and playful, they remain in character throughout the show with effortlessly entertaining performances. Alcorn, in particular, nails her brassy, glamorous persona, which is on full display in her Monroe-esque rendition of the Irving Berlin number ‘After You Get What You Want, You Don’t Want It’. Scott and his excellent piano work also get their chance to shine in songs such as ‘Minnie the Moocher’.

Unfortunately, the pair are not quite as effective as a comedy team. Their banter between songs (reliant on unsubtle innuendo and some rather tired pandemic-themed material) is often delivered awkwardly, despite clearly being planned and practiced. As the show progresses and everyone warms up a little, there are a few funny moments and some more natural repartee, particularly when the audience gets into the spirit and starts talking back. Their humour is most successful in the form of comedy songs (including the Fats Waller classic, ‘Your Feet’s Too Big’).

While much of 30 Something is aimed at an older crowd (a radio jingles quiz towards the end has the whole room merrily chanting, ‘I like Aeroplane Jelly’), Scott and Alcorn’s willingness to explore their 1930s theme without being sticklers for historical accuracy means they have created something that is still contemporary and original. This boisterous, nostalgia-soaked party is an ode to the spirit of celebration that continues to survive in even the most turbulent periods of history.