Kate Hennig’s play brings the drama of the Tudors to the present day.
Lynne Lancaster
[This is archived content and may not display in the originally intended format.] 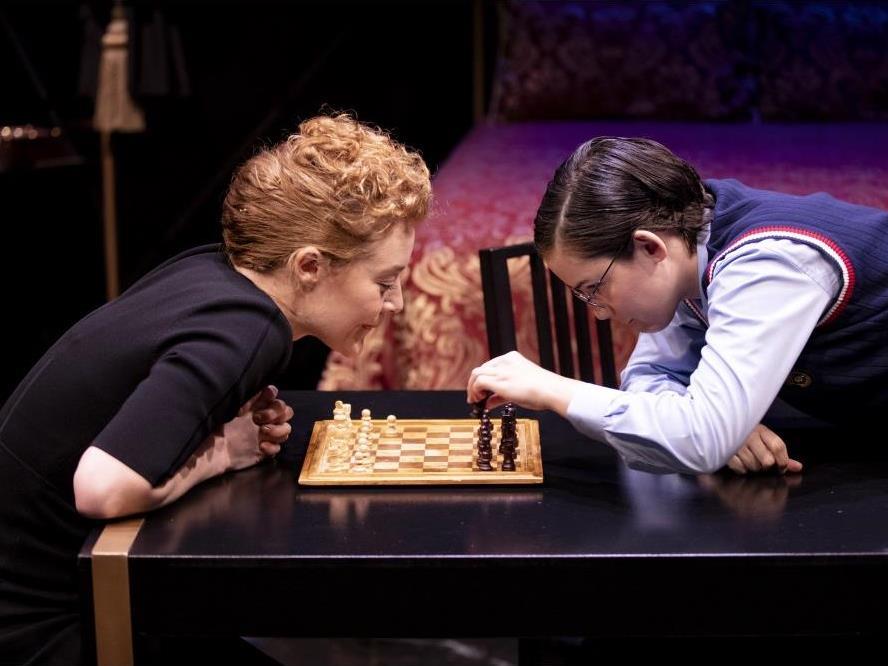 Nikki Shiels as Kate and Emma Chelsey as Edward in The Last Wife. Image: Phil Erbacher.

Canadian actor and writer Kate Hennig’s 2015 play The Last Wife is a somewhat radical retelling of the story of Katherine Parr, the last wife of Henry VIII of England, transposed and updated to the present day. A strong play with terrific performances, the issues it raises – such as women’s rights and autonomy and questions of faith – are still very relevant today.

We see how Katherine – also called Kate – is in some ways forced into the marriage with Henry and how she has to balance on a knife edge, at times fearing for her life. Beautiful, elegant Nikki Shiels plays her as a survivor: highly educated and steely beneath her seemingly fragile exterior. We see her snowed under administrative duties while acting as Queen Regent in Henry’s stead while he is away, and we see her as a fabulous stepmother trying to reunite the somewhat dysfunctional family. Before her marriage to Henry, Katherine has a scene where she is portrayed like a CEO with lots of documents for a pre-nuptial agreement. Both she and Mary give impassioned speeches about women’s rights.

The mood of the play is often intense, especially when Henry is around. Bearded Ben Wood plays him as gruff, arrogant and self-centred with a volcanic temper, liable to explode at any moment. He does not believe in women’s rights and he gets whatever he wants – at the beginning of the play, he forces himself on Katherine with an unwanted kiss. As the king, he has the power of life and death over everyone, including his wife. Yet we also see his human side, suffering with awful leg ulcers and proud of his son Edward. There are stormy quarrels and we witness hidden domestic violence as Henry threatens and attacks Katherine and hurts his daughter Elizabeth.

The play opens with Kate and Thom (Sir Thomas Seymour, played by handsome Simon London) already secretly in love, but we see how they are forced to part because of Henry’s desire for Katherine. Thom is portrayed as charismatic, gallant and dashing. Mary, Henry’s daughter by Katherine of Aragon, is portrayed by Bishanyia Vincent as steadfast in her Catholic faith, as well as bitter, repressed and angry. But she also grows to like her new stepmother. Her sister Elizabeth (Emma Harvie) is shown as bookish and very intelligent and she grows to love Katherine too, though the two sisters have a spitfire relationship. Like Katherine, both of Henry’s daughters have to balance precariously on a tightrope, juggling for survival in the ruthless politics of the time that could change in an instant.

Henry’s son, Eddie (the future Edward VI, England’s first king raised as a Protestant) is played by Emma Chelsey as a somewhat pompous and egotistical prig, though also hiding a great need for love and affection.

The set is ornate yet simple, dominated by a huge, high bed with fancy covers and cushions and two far larger than life portraits of Elizabeth and Mary. There are a couple of chairs and other small portable props including lots of official-looking clipboards and toy ships that Ed and Thom have great fun with. Costumes are contemporary, ranging from tuxedos and evening gowns to rather casual clothing.

At times the language is colloquial (and very strong), at others very formal (for example, parliamentary speeches and documents). Quotes draw from letters and documents of the time and there are references to canon, witchcraft, swords and the Reformation that might possibly sounds odd and a trifle anachronistic but somehow they work. At times the delivery (especially in one particular quarrel between Henry and Kate) is fast and staccato, at others more even. Overall it’s a dynamic and engaging play.