The Blind Giant Is Dancing

Pulsing with passion, this classic Australian political thriller speaks volumes about the present.
Liam McLoughlin
[This is archived content and may not display in the originally intended format.] 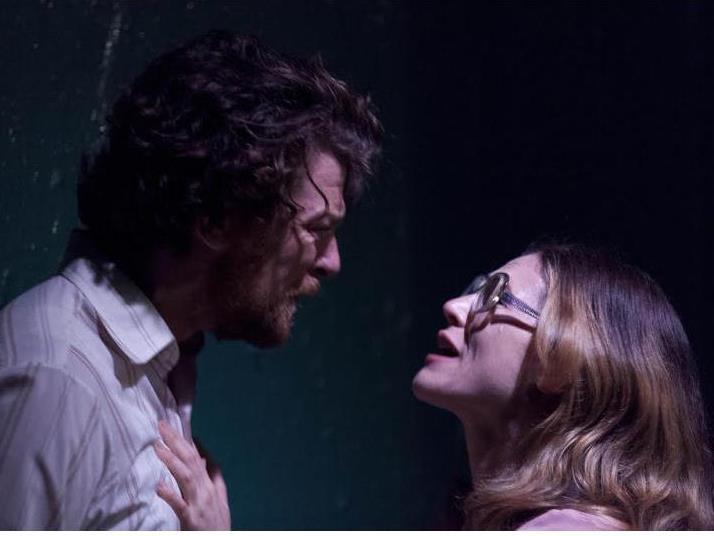 For Director Eamon Flack, The Blind Giant Is Dancing is about the derangement of the pursuit of power and its attributes: “misogyny, guilt, aggression, egomania, sexual conquest, self-pity, anger, righteousness, a singular and unbending point of view.” It’s also about “the antidotes to this derangement: collective undertakings, shared understandings, feminism, critique, outspokenness, moral leadership, compassion, love, variety of life…A more fragile list, but more necessary for it.”  Flack’s first play in his tenure as Artistic Director of the Belvoir St Theatre is a magnificent exploration of the corruptive influence of power as well as a fitting tribute to those for whom justice, not power, is their motivating force.

Written by Stephen Sewell, The Blind Giant was first performed in 1983 with Geoffrey Rush in the lead role as left-wing economist Allen Fitzgerald. The play follows the tragic Shakespearean fall of Fitzgerald from a promising and principled young socialist to a man so caught up in Labor party power politics and so crushed by the weight of capitalist ideology, the sinews of his soul are corrupted.

The play was a visceral reaction to the ultra-conservative political era ushered in by Margaret Thatcher and Ronald Reagan and the crushing of democratic socialist alternatives which this entailed. Commenting on the play’s connection to contemporary politics, Sewell says “The play was written at a really critical moment in Australian history, when the economy was changing from a post-war manufacturing base into the economy we have now, where the working class has been decimated…now we’re in a massively important historical moment, where we are living with the end result of the neo-conservative revolution that we witness happening in the play.”

A brilliant cast brings life to this 30 year old play. Dan Spielman rises to the formidable challenge of believably transforming from the inspiring idealist Allen Fitzgerald who believes “We’re not fighting for power, we’re fighting for a decent society” to a man monstrously corrupted by power. Yael Stone is tremendous opposite Spielman as a determined feminist who demands of her husband “stop thinking of me as your property”. Scenes between the two offer a powerful and moving depiction of competitive, capitalist dynamics at a personal level and how power can corrupt the most intimate of relationships.

The captivating dynamic between Spielman and Stone is complemented with several other excellent performances. Zahra Newman is magnetic as journalist Rose Draper, drawing in Allen and the audience in equal measure. Russell Kiefel, who played Allen’s brother Bruce in the original 1983 production, is compelling as the authoritarian father figure Doug Fitzgerald. Andrew Henry is marvellous as Bruce and the scene in Act Three in which Bruce confronts his father is truly extraordinary. Genevieve Lemon brings expert comic timing to her role as old-fashioned housewife Eileen Fitzgerald.

The centrepiece of the stage design is a large prison-like grate and it is a masterstoke from Dale Ferguson. In conjunction with Verity Hampson’s LED lighting over the grate, it’s an ingenious use of design and technology which is both immensely evocative and intelligently functional. Steve Toulmin’s composition and sound design also strike a chord, with music reminiscent of Vangelis during scene changes.

Flack’s version brings out the contemporary relevance of this historical play. The early 1980s was a significant historical moment where progressive dreams were drowned by a neoconservative tide across the west. It’s taken three decades but with the rise of Podemos in Spain, Syriza in Greece, Jeremy Corbyn in the UK and Bernie Sanders in the US, idealists are finally coming up for air again.

And so the play’s brilliant exposition of the interplay of opposites feels just as relevant now as in the early 1980s: capitalism and socialism, the personal and the political, private and public, cynicism and idealism, moral fortitude and moral bankruptcy. 30 years ago, the play was a bleak and prophetic vision of the way the forces of capitalism would coopt, corrupt and crush resistance. With progressive forces gaining momentum in 2016, the play can now be read with an optimistic air of possibility rather than merely the crushing of that possibility. The prescience of Sewell’s dark vision is clear, but so too is the pulsing and inspiring passion of progressives who commit their lives to a vision for a more just society.

Looking back on these characters, Stephen Sewell writes about his excitement at “how alive all these people now seem. These are characters absolutely taut with the knowledge that their lives are important, and their decisions crucial, not only for themselves, but for the future of Australia, and so they come across as that strangest of thing, the passionate Australian.”

The play’s program starts with words from a passionate Chilean.

Socialist President Salvador Allende said shortly before his death in 1973:

“In these dark and bitter moments, where treachery claims to impose itself, you must know that sooner or later, and very soon, large avenues will again open for men worthy of building a new society.”

The Blind Giant Is Dancing revisits a time when passionate Australians fought for a new and more just society.

The vision and passion involved in this production show Stephen Sewell, Eamon Flack and the whole cast and crew as worthy men and women who encourage us to imagine and build that new society.

The Blind Giant Is Dancing