Sam Wang’s solo show is a hilarious and nostalgic thrill ride through time and pop culture.
Oliver Wakelin
[This is archived content and may not display in the originally intended format.] 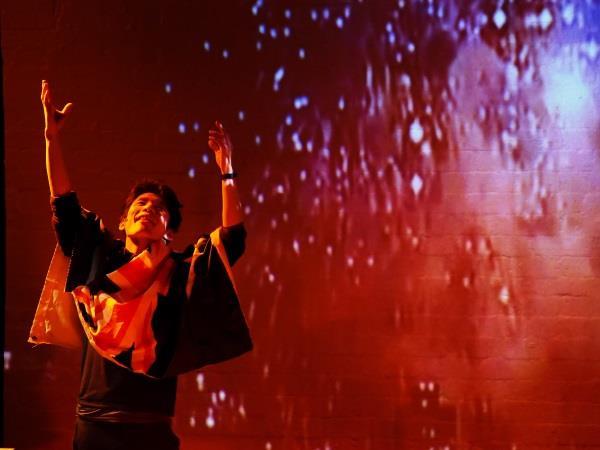 It’s 1993 and Australia has just succeeded in its bid to host the 2000 Olympic Games, much to the chagrin of our Chinese protagonist. Meet Agent Chang and Captain Yan: their mission, should they choose to accept it, is to steal America’s flight simulation software during an airshow in Australia. This plan involves a surprising amount of fireworks. At one point they must enter the matrix in order to infiltrate the Royal Australian Aerobatic Squadron. Here they confront Commander Kendrick, who won’t be happy until the interlopers are incepted. This is a bi-lingual, one man, whirlwind tour of 90’s nostalgia, set to a hilarious J-Pop backing track. Chinese Communists may have got a lot of things wrong, we learn, but that list does not include circus.

This offering is part of Belvoir’s 25A Program, which has its home in Belvoir’s Downstairs Theatre. The artists, who take 100% of the box office and receive the space for free, are tasked with creating a show for less than $1500. The emphasis is on supporting independent and emerging artists, with production and marketing in the hands of the theatre makers.

Writer and solo actor Sam Wang studied film and law at UTS before training as an actor at Toi Whakaari Drama School in New Zealand. This is his first piece for the theatre, a fact that he is proud to note means that he is now officially a writer. He’s a profoundly charismatic force on stage, with his versatility lying at the heart of the success of Skyduck. He plays an ever increasing number of characters, each detailed and enjoyably distinct. He dances, sings, speaks multiple languages, and can perform a commendable Matrix-inspired back bend.

Aileen Huynh’s direction is dynamic, compelling, and ultimately serves the text in a thrilling and original way. Huynh’s previous projects include George Dot Play, which drew on eclectic pop culture references to send viewers into hilarious spirals of nostalgia. This production benefits from Huynh’s technical knowhow: using A.V., she weaves Sam Wang into a rich, multicultural tapestry, often drawing on the humour that arises from viewing familiar cultural icons with fresh eyes.

You have to be quick to catch shows at 25A; this one closes on 20 July. Offering a hilarious and nostalgic thrill ride through time and pop culture, Skyduck also acts as a handy pressure valve as America and China tip toe around the Thucydides trap. The clash between East and West has never been more irreverent.