This production strikes and grasps at the audience, gouging presumption to open the heart.
Judith Greenaway
[This is archived content and may not display in the originally intended format.] 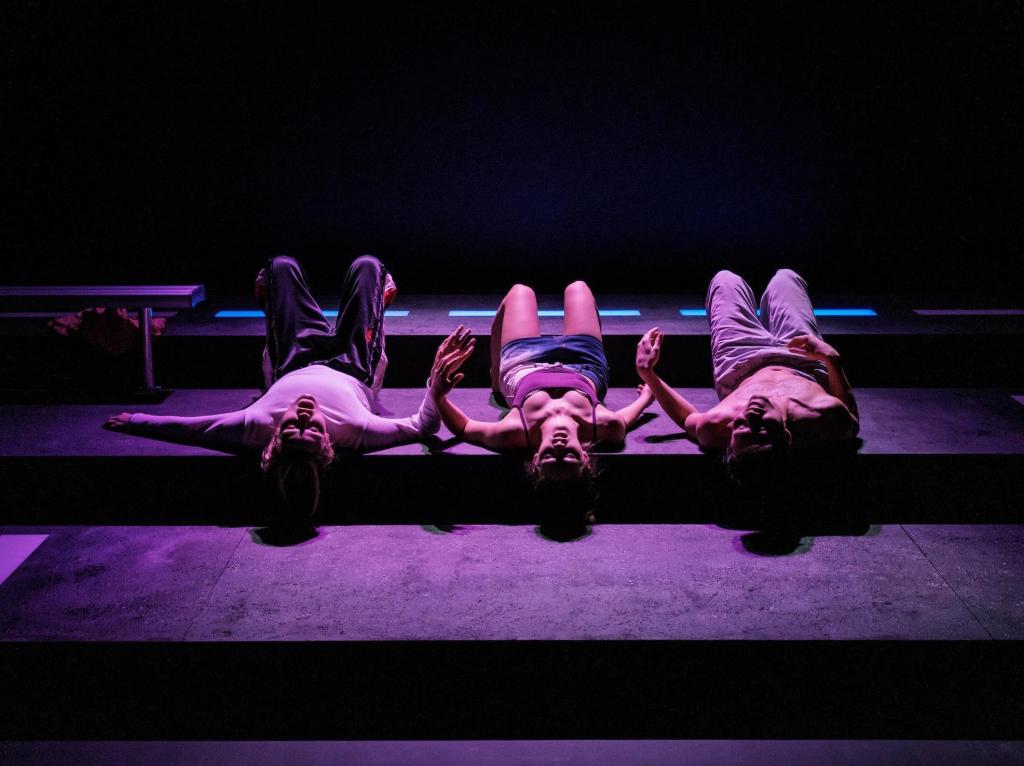 There’s a cognitive dissonance that forms like a lump in the chest as the initial shock of the accents wears off. Judgements and assumptions roil as the ‘heart stop’ lovers stand apart on the wide stage. It’s a surprisingly sweet, funny and unconventional love they exhibit despite the class, education and circumstance that we may assume from what we hear. That lumpen intellectual vs visceral response will pull the breath for the whole 75 minutes of Patricia Cornelius’ Love from Darlinghurst Theatre Company. This production strikes and grasps at an audience, gouging presumption to open the heart.

‘Better bloody not’ is a fav phrase for Tanya who falls in love with Annie across the room. Tanya is good at jail and knows how to attract and protect; Annie has always depended on the kindness of strangers. So they become an item, a success story plucked from the shelves of society’s discards. Their bond seems strong but love is tested when Lorenzo enters the picture. There’s shared nameless despair on view here and the split when it inevitably arrives cares not for our preconceptions.

As Tanya, Anna Samson hews a realistic and riven character from the stone butch. Samson brings out the animal early when describing the stalking of the Annie prey but gradually draws an audience through the well-developed walls to the mushy heart. Then heartbreakingly back. Rose Riley’s Anna on the other hand is a reed blustered by need and only just above water. She lives in the moment even when being aspirational and her flighty unformed youth is beautifully rendered by Riley, drawing the audience into her fancies and inconsistencies. When Hoa Xuande’s Lorenzo arrives there’s a genuineness and his naïve attempts at self-reconstruction have considerable pathos.

The rapport between the three cast members engages the empathy that director Rachael Chant writes of in the program, and the fun that the trio have is as telling as their destructiveness. This unflinching text from Patricia Cornelius requires a lot of its cast as a series of small scenes tell the story. The suddenness of the emotional energy change between each is exquisitely wrought by the director and the tech of this production is subtle and setting for each new context.

With the discreet use of a limited palette, the lighting shadows and narrows. Often with a blue that is bright but never strident and the warmth of amber. Created by light, there are thresholds and bars and barriers all through the black three-tiered set. Lights mingle with the bare set which is simply accessorised: people barriers, a bench and the unmistakable imagery of a road and a glary display of streetlamp.

The lighting and audio often tell their own story without speech. Just as often, the dialogue is rapid fire yet when the music makes its way gently through the dialogue it is unobtrusively emotional. Especially as the metallic treble whine of ringing metal gives way to the greater recognisability of strings. And there’s a superb sequence during a speech about love that is as ethereal, undefinable and big as the word itself.

Some potential audience members will have avoided Cornelius’ work, which is often described as raw. Make no mistake, this production will bite you, hard, then gnaw at your world view. Love is a breath-held journey into other lives and an arse kick to dispassion and rationality.