Indie feminist powerhouse company The Rabble have collaborated with leading children’s theatre St Martins to create an intimate and unexpectedly personal reflection of loneliness.
Anne-Marie Peard
[This is archived content and may not display in the originally intended format.] 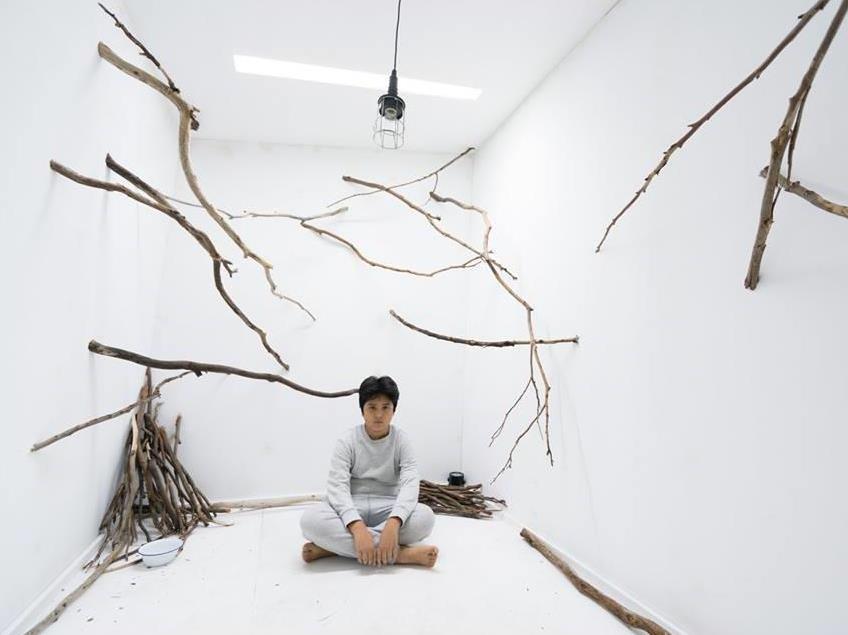 Theatre is often an antidote to loneliness. We sit with strangers, and friends, to watch stories and hope that they connect to our personal story. But Lone is watched alone, and there’s only one performer. Indie feminist powerhouse company The Rabble have collaborated with leading children’s theatre St Martins to create an intimate and unexpectedly personal reflection of loneliness.

One by one, 11 people are let through a black curtain and told to find the number that corresponds to the label stuck on their clothes. It’s dark and looks like a faded black and white photo. Almost scattered around are 11 identical houses – cubbies. It feels like a fairy tale, one of the good ones – creepy but familiar. Standing at our front doors, we can’t see anyone else; the visual safety of other people is gone. Putting on headphones, all comforting coughs and shuffles also disappear. All we know is that a child is in each house. And when the lights behind the door go on, we go in.

Emma Valente and Kate Davis founded The Rabble in 2006. With critically-adored and sold-out adaptions like Orlando, The Story of O and Joan, they start with design and work with actors to strip back text to re-create the worlds that might exist in the white spaces of subtext. Their work isn’t for children.

St Martins opened in 1977 as a company and space for children’s theatre, and in recent years have partnered with other Melbourne companies to create work with children for adult audiences. Also critically acclaimed, their productions like The Bacchae, Genius and Gonzo show a world from a young person’s perspective and have examined issues including the sexualisation of teenage girls, neurodiversity, and pornography and teenage boys.

Lone is for adults but each cubby and story is a collaboration with one of 11 artists, aged eight to 11. Each were asked to imagine a room that’s about loneliness. Remember what it felt like to be lonely as a child? Remember those uneasy fairy tales about a child being alone?

Davis and Valente’s designs are based on each young artist’s vision. The result is a space that shifts between the real and imagined. We see the child’s imagined world but feel it with an adult understanding, which is heightened by The Rabble’s aesthetic. Davis’s surprising, stark and spot-on symbolism provokes a rush of childhood memories and Valente’s lighting seeps through our skin to heighten every feeling.

All of which are pushed aside for a while because there’s a child in the space, which is only about two metres from wall to wall. This is the child’s world. We’re adults. We’re meant to look after children. Stepping in and seeing a child lying on the floor, I didn’t know if I were welcome or someone to be afraid of.

I spent my time with 10-year-old Jackson Reid. In his bio, he says that an interesting fact is that “I’m cool”. He’s right. His world is full of sticks and twigs from trees. It feels safe until he realises that someone is in his space with him.

Without giving away the experience, this young artist – trust the young artist in each room; they don’t need our help – created an ending that was so genuinely disconcerting and beautiful that I teetered somewhere between crying and cheering.

Being alone in the dark – there is perfect dark – isn’t lonely, but not being able to share your story and experience can be. Each Lone experience only lasts for half an hour, so stay and talk with the ten others who will have had very different experiences. Our group talked about where we sat in the room, what we saw, how we felt and the remarkable young artists who invited us into their worlds. I heard about a spell that turns a room pink, a party and a letter to a father. I want to see them all, but I wouldn’t swap my time in the room of sticks for anything.