From dancing with mops to wrestling with a fitted sheet, this new circus production is inventive, warm and quietly distinctive.
Richard Watts 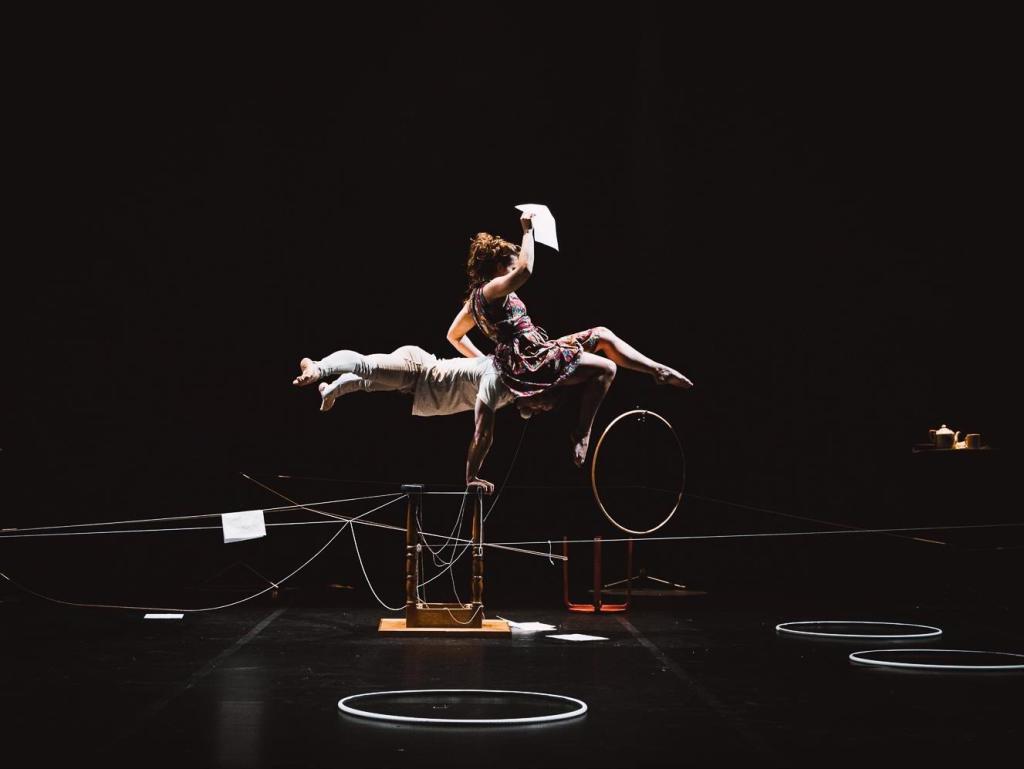 Blindfolded figures stand in darkness. Slowly, their hands reach out towards each other, into a circle of light. An initial tentative touch becomes an embrace, then a lift – a literal pick-up. Shirts are discarded, clothes unzipped as bodies clutch, clamber and slide off and over each other. Fumble becomes couple; random moments evolve into routine; a relationship develops before our eyes.

Drawing on the rich minutiae and rhythms of daily life, Fold: A Domestic Circus is an inventive new production performed and co-devised by Mieke Lizotte and Lewie West and skilfully directed by co-deviser Darcy Grant.

Set to an original score by Elliot Zoerner and Shenzo Gregorio, which ranges from plaintive to playful and incorporates the clatter of dishes and whistling kettles as well as Buster Keaton-esque jazz stylings matched to the movement on stage, the production sees extended and elegant routines built around such familiar activities as folding laundry and sharing a mug of tea. A pair of trousers held up by one’s partner becomes something to dive through; the legs of an upturned coffee table become hand-balancing apparatus; the pages of a book are literally unputdownable.

Though some nervous wobbles were evident on opening night, the circus skills displayed are excellent, but they are overshadowed by the emotional tone of the work; Fold is a work of exceptional intimacy, in which the attraction and connection between Lizotte and West is charmingly palpable.

Not every sequence succeeds – a passage involving tangles of wool stretched across the stage feels over-extended – but at its best, the production delights. Instead of showy feats there’s a subtlety to much of the craft on display. Such restraint extends to a quiet evocation of the uneven division of household labour – inventively referenced through a mop-balancing routine which West continues as if in ignorance long after his prop has been removed – and even to the loss of identity experienced by some long-term couples, with Lizotte and West’s features obliterated by a twisted bedsheet that swathes their heads and connects them like an umbilical cord.

Later, in a sombre moment near the end of the work in which headstands evoke a world turned upside down, the same fitted sheet becomes a shroud.

Fold: A Domestic Circus was developed with seed funding from Adelaide-based company Gravity and Other Myths (Lizotte and West are ensemble members while Grant has directed two Helpmann Award-nominated productions for the company to date, Backbone and Out of Chaos…). Utterly charming and eminently tourable, after a little refinement it is sure to have a long life.

The author visited Lismore as a guest of NORPA.