SSO’s concert performance of Britten’s opera brought out the best of the best – so where was the audience?
David Barmby 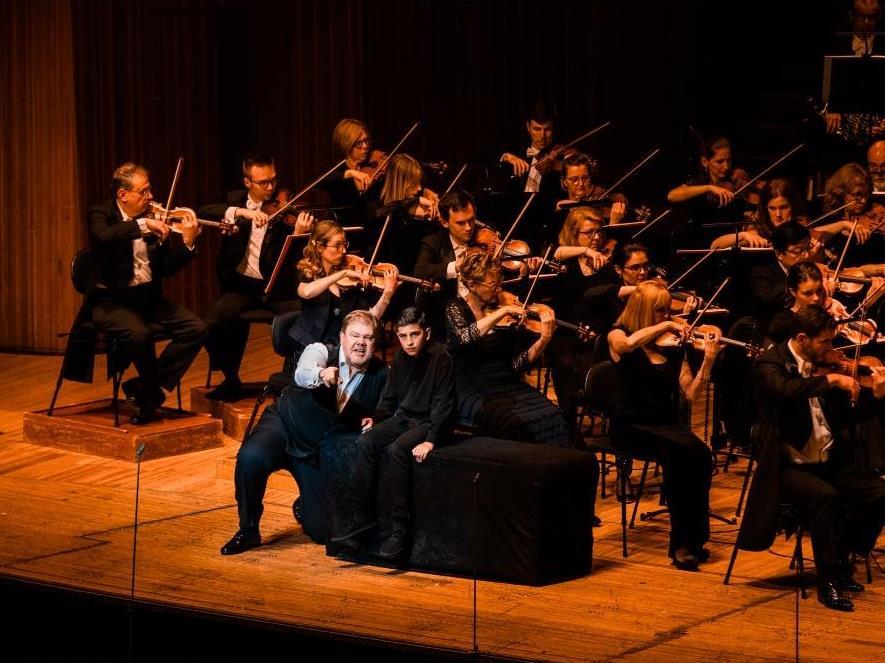 Peter Grimes is a 20th-century operatic masterpiece, comparable in influence to predecessors like Strauss’s Salome, Elektra, and Berg’s Lulu. Written by the great British composer, Benjamin Britten, its libretto was adapted by Montagu Slater from the poem Peter Grimes in George Crabbe’s book The Borough. While traveling in California, Britten read an article by EM Forster about Crabbe’s poetry that sparked homesickness for the landscape of Aldeburgh in Britten’s native county of Suffolk. Eventually, the composer and his partner, British tenor Peter Pears, settled there and founded a major music festival that continues to flourish today.

Britten’s Aldeburgh in Peter Grimes is a small, parochial village by the sea where busybodies know everyone else’s business. By contrast, the sea features prominently in the opera as a symbol of hope and freedom from this claustrophobic environment. In Act 1, a wild storm builds to a climax alongside a rally against Grimes while the villagers huddle in the warmth and safety of the pub. Britten also composed Four Sea Interludes that act as instrumental pauses where the audience may reflect on the unfolding tragedy through a much more expansive musical context. With rich symbolism, the River Alde eventually reaches the sea, traveling through twists and turns to arrive at the freedom of the ocean.

Against this background, we have the ambiguous protagonist Peter Grimes. Is Peter Grimes an eccentric rough diamond, an innocent outsider, or a cruel misanthrope, perhaps even a sadist who seeks pleasure in abusing and killing young boys? Certainly, his declared wish is to overcome public gossip and gain respect through hard work as a fisherman so that he may marry Ellen Orford, a respected widowed schoolmistress with whom he dreams of starting a new, fresh life of normality. But does he need a wife or a mother so that he may pursue his deranged and manic behaviour with impunity?

Interpretations of the character have been linked to the social oppression that Britten and Pears suffered as gay men in mid-twentieth-century England. If so, what may we infer about who Peter Grimes is and his motives?

This excellent concert performance by the Sydney Symphony Orchestra under the direction of its artistic director David Robertson affords no clues. Stuart Skelton is one of the world’s greatest Heldentenors and arguably the most outstanding Peter Grimes of our time, following the legacy of Canadian Jon Vickers who sadly passed away three years ago. Skelton plays Grimes with compassion and subtlety yet admittedly I was left feeling deprived of the sinister dimensions of the character as originally interpreted by Peter Pears. Grimes has already been directly responsible for witnessing the death of two boys and his latest toy-clutching ‘workhouse brat’ is about to become the third killed. Jon Vickers faced the same dilemma when he was in the role, even insisting on changing part of the text.

Nicole Car was an excellent Ellen Orford. Her Sunday morning exchange with the boy was deeply affecting as was her motherly pathos in singing ‘Now my broidery affords the clue whose meaning we avoid’ once her lovingly knitted jersey is discovered as evidence of the boy’s death on the beach. Baritone Alan Held was faultless as the retired merchant skipper Balstrode – a terrific actor with a richly expressive voice. Deborah Humble provided an expressive and effervescent Auntie, the publican. Jacqueline Porter (Niece 1) and Cleo Lee-McGowan (Niece 2) were superbly flirtatious pub-house tarts and Christopher Richardson was a strong-voiced, rigid and well-attired Swallow, the lawyer and Mayor of the Borough.

Experienced Elizabeth Campbell was simply perfect as the neurotic and laudanum-dazed busybody Mrs Sedley, a rentier widow who despite her moralistic protestations is ultimately responsible for Grimes‘s tragic exposure and demise. Baritone Michael Honeyman as apothecary and quack presented as an engaging stage presence attempting to temper Mrs Sedley’s neurosis and drug addiction. Rob Macfarlane was effective as Bob Boles, a fisherman, Methodist, and gin-soaked drunk obsessed with attempting to sway the opinion of the village community against Grimes. Bass Jud Arthur as Hobson the carrier was duly faithful and sincere. The Rev Horace Adams was suitably pleasant yet completely ineffective in seeking to resolve this serious public scandal. All praise, too, for the impressive singing of the Sydney Philharmonia Choirs, mostly from memory and with acting directions from Richard Robertson. This is complex music usually sung by an opera chorus of professional singers; their contribution of singing and acting was vivid and deeply rewarding throughout the performance.

There were some oddities of costuming and staging: why was Grimes, a simple fisherman, dressed in a three-piece suit, eventually becoming dishevelled? But my overall impression was of an outstanding musical achievement. Sadly Thursday’s performance was heard by only a half-full hall. This did have the benefit of providing the audience with a warm and resonant acoustic for the performance but I cannot understand why such a quality production was barely half full on opening night; here was a world-class roll call of soloists, an excellent orchestra, a brilliant and experienced conductor and a wonderful chorus. So where was the audience?