Vital and engaging theatre that gets to the heart of the pressure cooker of male violence and the toxicity of repressed emotions.
Kath Melbourne
[This is archived content and may not display in the originally intended format.] 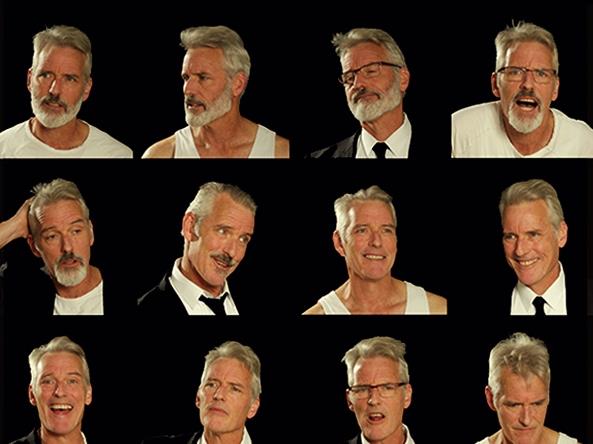 I have a confession to make. I have an especially strong appetite for one-person work. I love it because the stakes are high. The problems and strengths of storytelling are laid bare and the pressure is on the single performer to carry the whole work.  You will it to succeed. You really, really want it to succeed because you know if it doesn’t it will be painful for everyone involved.

You empathise with the sense of personal responsibility the performer has to fill the stage for the duration of the work, to be enough. There is no room for breath, no room to allow the other performers to carry you through dips in energy. It’s just the single performer and a bunch of other people on the other side of a theatre subjecting them to complete scrutiny.

You want it, with all of your being, to be so potent that it reveals the layers dreamt up by the writer and willed into being by the director.

It can either soar or sink.

Twelve Times He Spoke‘s all male team of performer Guy Hooper, director Ben Winspear and writer, Finegan Kruckemeyer is a solid one, gifted with experience and a slew of successful works under their individual belts. There is no sinking. The audience is in good hands.

Twelve Times He Spoke is a journey of an at once ordinary and extraordinary every-man from the ages of seven to 55. In the work we see his life measured by 12 pivotal moments of speech, representing the highs and lows of his life.

It’s not only what he says in those moments that reveals who is and where his life is at. It’s also what he doesn’t say, or can’t face saying. The way we see ages 41, 42, 43 flash by is powerful because of its absence of speech. When our every-man reappears at age 44 the toll of the previous unspoken three years is clear.

At 44 you see performer Guy Hooper really hit the depths of his stride and reveal his capacity to embody complexity. At 44 he comes onto stage as a different man, his skin appears sallow and his body physically hollow.

Guy’s versatility is on show in this work and Ben Winspear has deftly directed this talented performer. You see it in the details, as a broken man with the alcohol shakes, as a shy schoolboy berated by a teacher you believe is in the room.

This is clever and layered writing from Finnegan Kruckemeyer. When you come into the work you bring your own expectations of the most important moments of speech in a man’s life. You expect to see the traditional speech at the 21st, the Toast to the Bride at the wedding, the retirement farewell and perhaps a Eulogy. In Twelve Times He Spoke you’ll see some of these things, but perhaps not in the way you expect.

The journey of the work explores the circular nature of life, mirrored by the device of the antique compass that is a symbol through out the work. We see it in the turning of the set and via the direction the character is going in. It’s a clever metaphor that’s used to effect.

This is vital and engaging theatre. One that gets to the heart of the way men navigate their place in the world, the pressure cooker of male violence and the toxicity of repressed emotions. It is important to tell stories like this in a time where male suicides, particular in the 35-49 year age group, are at disturbing levels.

Twelve Times He Spoke is a highly tourable show. Hopefully it will find a future life after its premier season, including the small venues of rural and regional areas, and in non-traditional spaces such as prisons. It’s definitely simultaneously clever and accessible enough to stimulate discussion after the show has ended.