Adapted for the stage by Tom Wright and directed by Matthew Lutton Bliss is a show which makes you question who is right and who is wrong – and at times what the hell is going on?
Jess Zintschenko
[This is archived content and may not display in the originally intended format.] 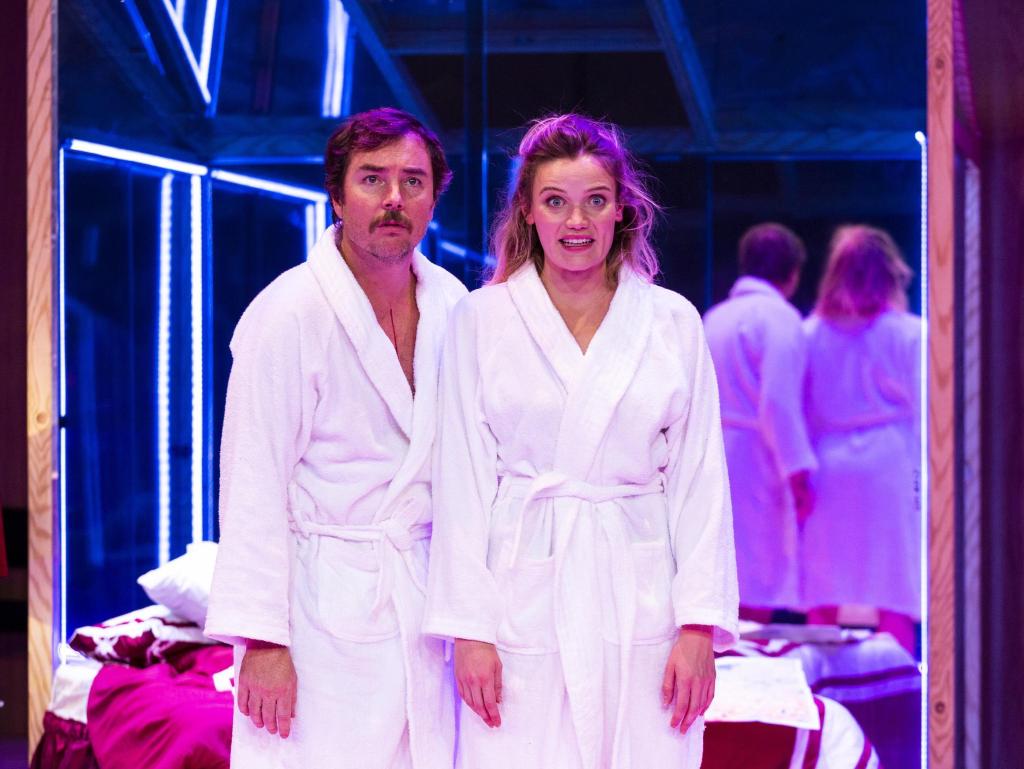 Ad man, storyteller and ‘good bloke’ Harry Joy was created by Peter Carey in his 1981 novel Bliss. Following a film version in 1985 starring Barry Otto, and an opera in 2010 featuring Peter Coleman-Wright, the character in his rumpled white suit has once more been raised from the dead in 2018 by Toby Truslove in the Malthouse and Belvoir production of Bliss.

Adapted for the stage by Tom Wright and directed by Matthew Lutton Bliss is a show which makes you question who is right and who is wrong – and at times what the hell is going on?

The show centres around Harry Joy and his journey to become ‘good’. After he ‘returns from the dead’ he is unsure if he is actually alive and well or has instead woken up in hell. Harry is uncertain of the world around him and how real it is. The show reflects this uncertainty through the metatheatrical performance style and stagecraft elements. Set, costume, lighting and sound design all work together to give the audience – and Harry – the underlying feeling something is not quite right and shows the artifice of the theatre and Harry’s life. The narration is often poetic, in both language and delivery. The audience is always very aware of the storytelling and the storytellers. Much like in The Truman Show as Truman becomes suspicious of his world, everyone has to work twice as hard to convince him it is real. The same thing happens for Harry Joy with those he interacts with in his world.

Lutton has assembled a great cast to torment, love, inspire, and question Harry Joy. Particularly strong are the slightly surreal and comedic performances from Marco Chiappi, Amber McMahon and Susan Prior. Truslove is well cast as Harry Joy, his charm, humour and ‘everymanness’ serve the character well. His portrayal is likeable, and (despite the bizarre circumstances occurring) relatable, so the audience willingly accepts him as their protagonist.

While at times quite dark and confronting the overall tone is fairly lighthearted. The next laugh is never far away. Bliss is definitely for an Australian audience – the details in the 1980s costumes, props, sound, characters, mannerisms, and dialogue are so perfectly captured they can make you nostalgic for a time and place you have never experienced.

Even though Bliss is polished and entertaining, it still feels at times like a work in progress. Much of this is from the length of the show. At three hours including interval it is long. It doesn’t necessarily feel long at the time, perhaps the frequent revolving of the stage makes time feel it is passing faster, but some sequences are drawn out and could be edited or removed. When adapting a text determining what is vital and what the story can do without can be difficult. With Bliss it is hard to decide if the show feels long because it actually is too long, or because our attention spans now only easily digest entertainment in short fast paced bursts. Digitally streaming TV avoids ad breaks, movies are 80 minutes, and even musicals these days can be produced at 90 minutes with no interval – so enjoying a longer piece of entertainment requires more effort on behalf of the viewer.

If you’ve got a spare three hours, a nostalgic feeling for 1980s Australia, and a liking for dark humour, you should spend some time investigating the life and death(s) of Harry Joy down at the Malthouse.