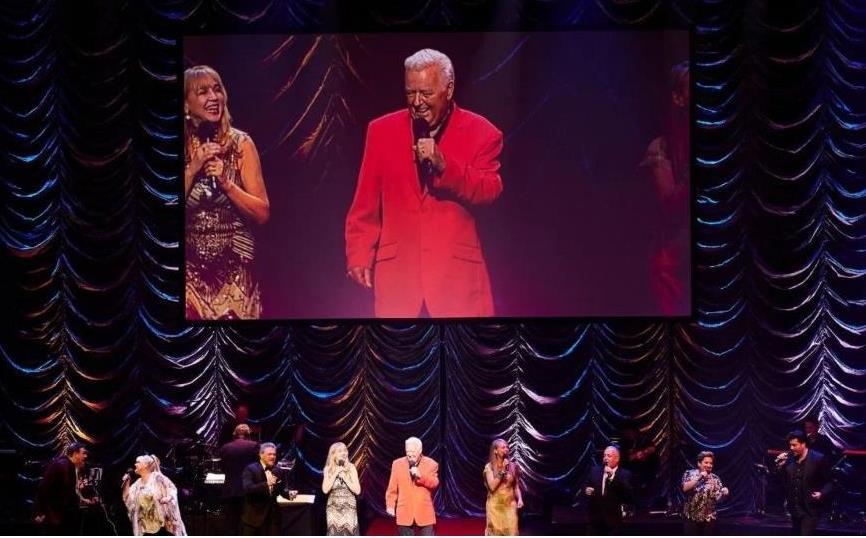 Long before Australian Idol or The Voice there was a cute little TV show called Young Talent Time (YTT). It premiered on 24 April 1971, beginning with just a four-week contract and going on to run for an amazing 18 years and 800 episodes. Families around the country tuned in to watch Johnny Young and the kids sing and dance for an hour every Saturday evening. It was a ritual – begin your weekend watching Daryl Somers on Hey Hey It’s Saturday, and round off a great day with YTT.

The show was first broadcast in black and white, and clips from those early days were projected onto
the stage on Saturday night as the Adelaide Cabaret Festival audience took their seats and the Reunion Show began. It was fascinating to see just
how basic the sets and costumes were in those early days when the world was a gentler and perhaps
less sophisticated place. The eager Adelaide crowd was singing along to the film clips before the
show even got started.

Johnny Young – now answering to the more grown-up ‘John’ – was 24 when the show premiered
and had already established a successful career as a radio announcer, songwriter, and TV producer.
YTT was his baby and one he nurtured throughout its long life. Ever the entrepreneur, the YTT TV
show sat alongside the Johnny Young Talent School at which many of the show’s young stars took
lessons in acting, singing, and dancing. Looking good in a bright red blazer, but appearing a little frail
at 74, Young was joined on stage by some of the dozens of performers who got their start in show
biz as part of the team.

Singers Jane Scali and Philip Gould were in the original cast, appearing in that first episode. They
were joined in the Reunion Special by Beven Addinsall, who is also the show’s creative director, alongside Karen
Knowles, Steven Zammit, Joey Dee, and Lorena Novoa. They were accompanied by a seven-piece band
under the musical direction of another alumnus, Greg Mills. In a touching moment later in the
show, Mills told the audience with real affection and gratitude how Johnny Young had paid for him
to go to university in Melbourne to study orchestration.

First to the stage was Steven Zammit with a rousing rendition of the Michael Bublé hit ‘Sway Me’,
followed by a creditable Sinatra channelling for ‘My Way’. After that, it was a sentimental journey
through personal favourites from each performer. The lovely Jane Scali was probably the audience
favourite on the night. Wearing a glittering flapper-style dress she showed that she can still sing and
dance even 50 years on. And if Scali was the audience’s golden girl, it’s fair to say that Addinsall was the heart-throb of the night.

As each member came on stage, cute clips of their YTT days were projected above them.
There were many musical highlights: Karen Knowles gave us a passionate ‘I am Australian’, made
famous when she was with The Seekers, that had a few in the audience wiping a tear from the eye;
Novoa picked up the pace with some 1980s gems from The Pointer Sisters; the boys had fun
with a medley of Rat Pack numbers; Nicole Cooper had everyone singing along to her ABBA mash-up;
and the ensemble singing ‘Bridge over Troubled Water’, with Addinsall on piano was very
special.

My personal highlight was Gould with his masterful musical theatre voice and old-school style
– he can even tap dance. Gould teamed up with Scali for ‘We’re a Couple of Swells’, a number
made famous by Fred Astaire and Judy Garland in Easter Parade. Accompanied by footage of their
younger selves doing the same routine on the show 45 years ago, this was a moment of classic stage
craft.
Johnny Young sang a few of the songs he had written over the years, including ‘Smiley’,  ‘I Thank You’,
and his biggest success, ‘The Real Thing’, which was a huge hit back in the day for Russell Morris.

After a warm and wonderful two-and-a half hours of nostalgia, it was all over. And if you’re an
Australian of a certain age, the song ‘All My Loving’ means only one thing to you: another episode of
Young Talent Time has come to an end. And yes, on Saturday night at the Festival Theatre we were
all on our feet singing along and swaying to the music as Young and his team brought the
Reunion Special to a happy close.

Young Talent Time – 50th Anniversary Reunion Special was presented for one night only, 19 June, in the Festival Theatre as part of the 2021 Adelaide Cabaret Festival,  which continues until 26 June.

If you missed the one-night only nostalgia-fest
you can go online and buy the special 50th Anniversary 2 x DVD set, or follow the cast as they make their way across the country on the 50th anniversary national tour in October and November 2021.