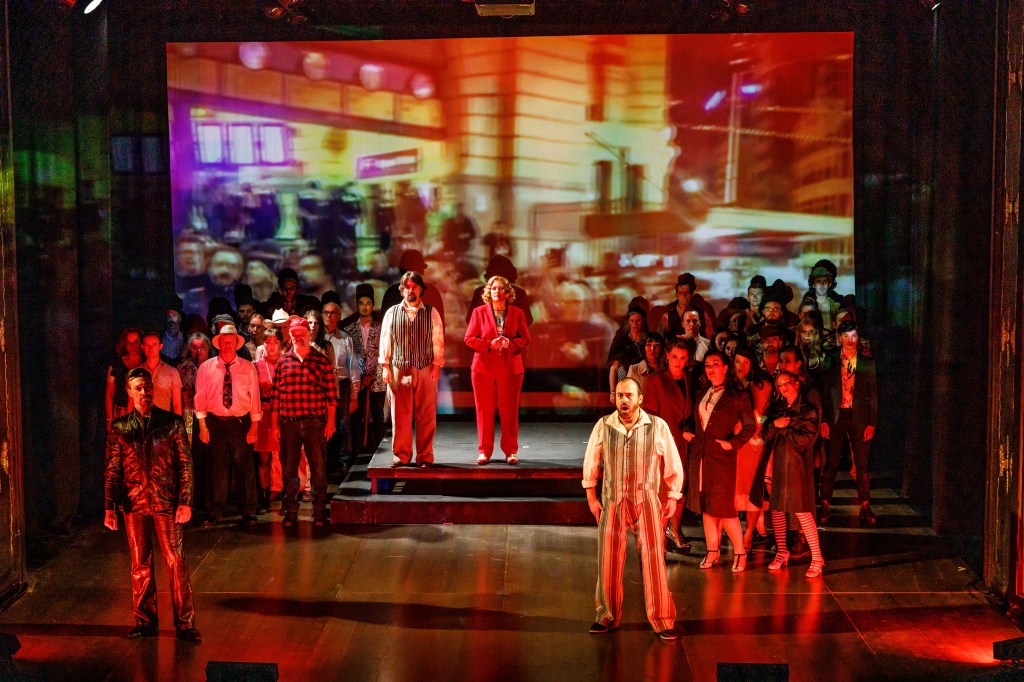 ‘Chaundy and the production team provoked us to consider the absurdity of it all by building the current socio-political context into the final scenes.’ Photo supplied.

‘In the whole of the world there’s no crime more despicable than that of having no money.’

The Rise and Fall of the City of Mahagonny

Such sentiments provide the narrative crux of The Rise and Fall of the City of Mahagonny, an opera by Kurt Weill, Bertolt Brecht and Elisabeth Hauptmann which currently graces the stage of the Athenaeum Theatre. The choice (or happy coincidence) of staging the production now, in pre-election May 2022, could not have been better timed, with current events providing the perfect moment for this blackly comedic work to shine.

Suzanne Chaundy, who wowed audiences earlier this year with her feisty interpretation of Die Walküre, directs a cast of spirited performers in an impressively current production of the 90-year-old opera. First performed in Leipzig in 1930, The Rise and Fall of the City of Mahagonny is a political-satirical opera that was banned in Germany after 1933 by the Third Reich. Diligently distrustful as it is of the capitalist and modern political system, you can see why it caused a stir with the Nazi Party. It presents the ways in which we have been governed as anathema to compassion and community, and conducive towards lives of captivity, poverty and hate. In a world where lack of money means a lack of justice, we are left to consider if we are truly free at all.

Chaundy and the production team provoked us to consider the absurdity of it all by building the current socio-political context into the final scenes. Projections of recent bushfires, floods and protests are spun across the stage one after another and kudos to lighting designer Peter Amesbury for this. These images of national disasters, juxtaposed with the jubilant whooping chorus of ‘Life in Mahagonny’ are a hard-hitting and pivotal moment in the opera, emphasising the theatrical form Brecht was so renowned for: the theatre of the absurd.

In this final scene, which really shone, the chorus energetically sang: ‘In life you must stick to your choices; you live or you die, take your pick, so get kicked in the face if you want to; as for me I would rather stand and kick.’ It’s a ‘do we laugh or do we cry’ moment and seemed to captivate the audience, leading into wild applause at the curtain call. The timing here, just weeks before the national election, was pure brilliance. We all perhaps were feeling like we were being kicked around by politicians and reminded of the shortcomings of current leadership. Great work from chorus master Raymond Lawrence here for the rousing group singing. The chorus is a strong feature of the opera and has tragi-comic effect.

The main character, Jimmy MicIntyre, strongly performed by baritone James Egglestone, pays the ultimate price for his petty crimes while much fouler criminals walk free, for the reason that he is penniless and cannot garner bail money from his greed-driven friends. As with other Weill and Brecht collaborations, the jangly tunes and pithy lyrics acerbically punctuate the drama perfectly. Jenny Hill, love interest and lady of the night as played by Antoinette Halloran was a gorgeously fiery character, clad in sequins and black lace by costumier Jason Chalmers, looking radiant in every scene. She exuded girl power and spunk; a challenge to the chest-beating antics of the lumberjacks, who were also fantastically played.

The timing of the production’s political commentary was its strength; it clearly resonated with the audience. However, the drama was a bit lacklustre when compared with the Victorian Opera production of Brecht and Weill’s Happy End, where the choreography, costuming and set were electrifying. Yet sometimes a good ending trumps a slightly lacking plot, and it was the final scene with its political montage that had maximum effect in this production; it was worth the build-up.

Criticism of our current understanding of ‘democracy’ was not lost in the farce of the production and I was reminded of the words of political theorist, John Keane:

Love the hypocrites and hypercrits, the hucksters and the traitors.
Love the thieves because everyone has thought
of stealing something at least once.
Love the rich who live only to empty
your purse or wallet.
Love the poverty of your empty coin purse or wallet.

In these critical times. the need for compassion and justice is paramount, and the lyrics of Brecht and the music of Weill from the 1930s remain highly relevant. Director Suzanne Chaundy, conductor Peter Tregear, the cast and production team really amplified this resonance through great stagecraft.

The Rise and Fall of the City of Mahagonny will be performed until 5 May 2022.