An unlikely union between gangsters and the Salvation army.
Leila Lois 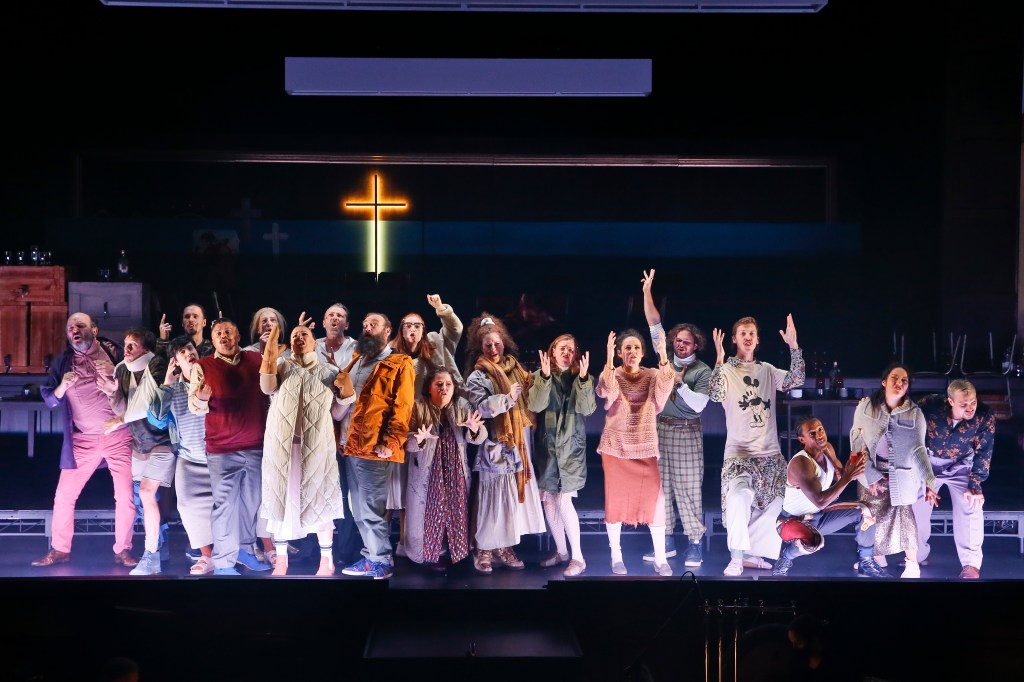 ‘This popular musical opera production had the fun value of cabaret, with the guts of a gangster movie.’ Photo by Jeff Busby.

Touted as an ‘anti-capitalist musical comedy’, Victorian Opera’s new production of Happy End (the love child of playwright Bertolt Brecht, composer Kurt Weill and novelist Elisabeth Hauptmann) certainly dazzled and entertained. It was an incredibly vivacious and amusing performance, a hearty piece of operatic light relief to blast the cobwebs of the past two pandemic-dominated years away.

The skill and harmony of the cast was demonstrated by the fact that Bridget Mylecharane stood in at the last minute to cover the main role of Sister Mary, as Emily Burke (originally programmed) unfortunately fell ill to COVID. Mylecharane did a splendid job, bursting with sassiness and vocal virtuosity.

The strength of the production however, lay in the familiarity and repartee between the cast members, the way the lighting and set were used cleverly to emphasise their interactions, the updating of the anti-capitalist themes and the authenticity of their characters. Although the opera is set in America in 1919 against a backdrop of gang war and prohibition, there were moments that glistened with relevance for our times: ‘the world belongs to all of us and let’s march together to make it our own!’ exclaimed Olivia Cranwell (Sister Jane) as the unlikely alliance between the gang and the Salvation Army troupe is made.

She could have forged a mantra for our times, as public outrage reaches boiling point at the corruption of some leaders across the world and the inability of other leaders to steer us towards safety and equality. The Brechtian absurdity of the opera was played up to maximum effect, with perfectly exaggerated New York accent coaching to show off the tricksy language. The bawdy lyrics, well-calculated slapstick and a kitsch set (with a church up top with neon crosses and a speak easy below with liquor bottles strewn everywhere) showed the full irony of existence.

Director Matthew Lutton and Musical Director Phoebe Briggs worked well together to ensure the quality of the drama and the music. Many of the one-liners were delivered with gumption to an appreciative audience, such as ‘I’m calm as rigor mortis’. The placards held by the Salvation Army as they delivered their sung sermon saying: ‘DOING THE MOST GOOD’, were a humorous nod perhaps to the contemporary phenomenon of virtue signalling. Both groups- the gangsters and the Salvation Army are patently crazy but their unwavering belief in family, companionship and honour are accentuated creatively by this production.

There is something recognisable and humbling in all the caricatures. Weill’s love for jazz was really brought out by the Victorian Opera Chamber Orchestra under the conduction of Briggs. The swag and swing of songs such as ‘Song of the Big Shot’ washed over the audience like a warm whiskey-soaked New York evening. The costumes, like the set, also designed by Marg Horwell, evoked the seedy brilliance of Jazz Age Manhattan perfectly and notable were the ridiculously baggy pink slacks worn by Euan Fistrovic Doidge as a slippery Sam Wurlitzer. The Salvation Army sisters in their tightly buttoned navy cardigans and brown brogues were a contrast to the flamboyant machismo of the gang.

This popular musical opera production had the fun value of cabaret, with the guts of a gangster movie. Victorian Opera asserted itself as an innovative and entertaining company that brings this ancient art form to life with exuberance.

Happy End will be performed until 26 March 2022