Sublime and powerful as a storm.
Leila Lois 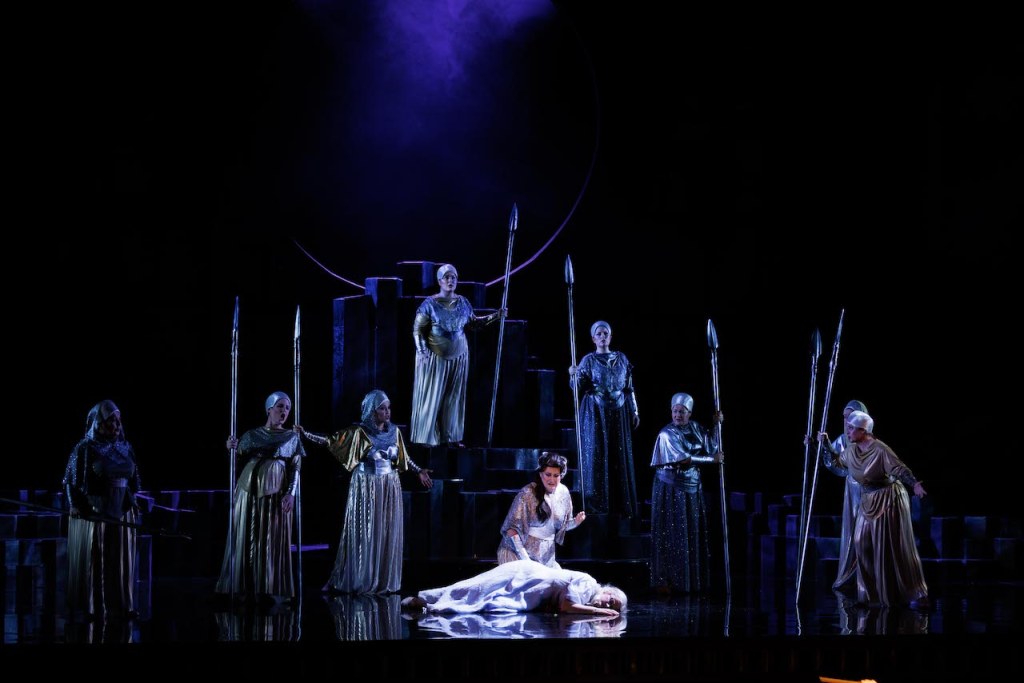 Opening night of Die Walküre (part two of Wagner’s The Ring of the Nibelung) was a glittering tempest; the innovations in set, costumes and dramaturgy of the piece as luminous as the sublime orchestral and vocal aura. Set designer, Andrew Bailey, amplified the celestial themes to epic proportions through storm projections, a stage with a water-like finish, bright marble stage blocks and a grand tree trunk into which a glowing sword was struck. If you are a fan of Star Wars or The Lord of the Rings, you would love Wagner’s Der Ring des Nibelungen (aka The Ring Cycle) for its fantastical nature and this production did not disappoint.

The story in essence circulates around a dispute between the the king of the gods Wotan (Warwick Fyfe) and his wife Fricka, goddess of marriage (Sarah Sweeting) on questions of morality and self-determination. Wotan wants to protect his son Siegmund, while Fricka wants him punished for adultery and, by proxy, Wotan too, for his infidelity towards her. In the end, the two agree on a cruel pact to have him die in battle, presided over by Wotan’s’ mystical daughter Brünnhilde. It is a grim plot, befitting perhaps of the trials and tragedies of two years of the pandemic. The sublimity of this production stirred the Melbourne audience visibly in a nearly full Her Majesty’s Theatre and reminded us all what a tour de force live opera is.

The scene that shone brightest was Act II, set in the mountain dominion of Fricka and Wotan. The exquisite costumes by Harriet Oxley and lighting design by Rob Sowinski were staggering. Sweeting was radiant as the goddess of marriage; adorned in a floor-length Klimt-esque gold dress with crinoline underskirt and headband with a sparkling crescent floating above. Her every move caught the light coming down in rafts upon her. The iridescent dresses for the ‘Ride of the Valkeries’ at the start of Act III also brought radiance to this nonet of femme fierceness. Their voices were magnificently strong as they sang the famous battle cry of ‘Hojotoho’. Their high dramatic tones were perfect; their delivery, electric.

The orchestra was superbly led by Maestro Anthony Negus, who returned on his promise to bring the music ‘viscerally alive in the moment’ (as per an interview with opera dramaturg Sophie Rashbrook). Indeed, Negus drew out the intensity of the two major protagonists, Siegmund and Brünnhilde, conducting the orchestra to swelling crescendo and simmering diminuendo in this opera of the Ring Cycle that has the most orchestral intrusion to the singing.

Suzanne Chaundy, the director, did a wonderful job at dramatising the connection between Brünnhilde and Siegmund, provoking pathos for their story, which is quite a feat, given that it is mired in murky areas of incest, exceptionalism and machismo.

Melbourne Opera, under Chaundy’s direction, really pulled off a production of great existential magnitude and sublime beauty with Die Walküre. Given the bleak subject matter and legacy of questionable gender and racialised mores that Wagner productions undoubtedly bring to the table, I was thrilled to see the femme ferocity of the Valkerie scenes and dramaturgy of the women in the narrative shine. In so doing, it asked important questions of the audience.

As Chaundy posits: ‘In Die Walküre we experience the power of love’. I left this production having disarmingly embraced the rawness and hugeness of the emotions shared by the cast, in a production that exposes the flawed humanity of all, even the gods. It was like emerging from a storm, one of Wagner’s most profound leitmotivs, reeling, unresolved and questioning.

Wagner’s Die Walküre will be performed at Her Majesty’s Theatre, Melbourne until 16 February before touring to Ulumbarra Theatre, Bendigo on 27 February.