The sinister side of suburban Melbourne through a neo-noir lens.
Sarah Halfpenny 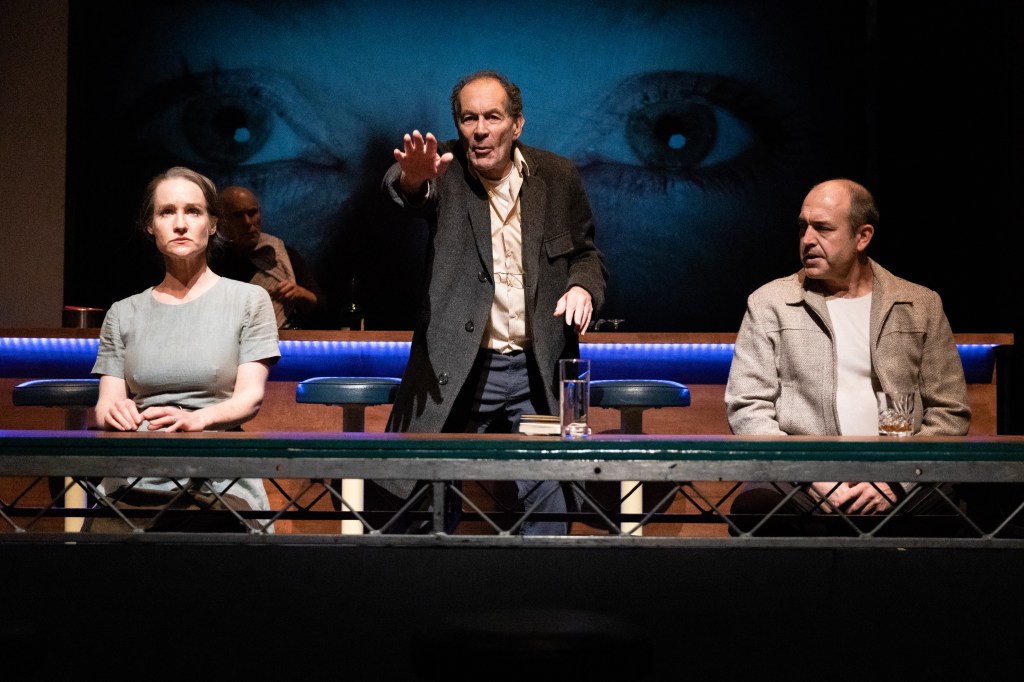 Spanning seven decades and set across several well-known inner Melbourne suburbs, The Darkening Sky is a refreshing new piece of Australian theatre on many levels. It’s exciting to have a play that the audience can connect to geographically, and actors whose voices and phrases mimic those of your own.

Billed as a neo-noir thriller, the stage was brilliantly designed for this genre, with low-level lighting and a classic café/bar set – highly reminiscent of Edward Hopper’s famous painting, Nighthawks – filling the major part of the space.

This first-rate staging, aided by the use of a live soundscape and multimedia elements, allows the audience to become instantly immersed in this ominous story, presented in a shadowy cinematic style.

The plot revolves around the disappearance of two women from different eras, and the two men undertaking separate but equally desperate bids to solve the mystery of their vanishing. Jamie (Brian Lipson) is now an old man looking back over the years to face the events of his childhood and youth (young Jamie played by Matthew Connell) and his abandonment by his mother Heather (Edwina Wren). Tony (Tom Dent) is a private investigator charged with finding the story’s femme fatale, Chantal St. Clair (Rebekah Hill), who also has links to Jamie.

Paying tribute to the film noir genre, prevalent in the 1940s and 1950s, there’s plenty of blurring of the lines between good and bad and right and wrong. Themes of paranoia, revenge, and estrangement – with a hefty dose of sexual desire and betrayal – feature prominently, as does the recurring motif of birds.

A deep understanding of the characters and their motives felt frustratingly out of reach for the almost two hour running time, and the storyline was at times confusing and vague. Although The Darkening Sky got a lot right, something of the ‘care factor’ was missing in the characters’ stories.

The acting was admirable across the board, with the cast successfully conveying people who are conflicted, confused and cynical antiheroes, trapped in puzzling and difficult situations, and making choices out of desperation, desire and fear.

Ultimately, The Darkening Sky is an absorbing work that successfully forebodes something menacing about Melbourne’s past, but as it’s seen through the eyes and jumbled recollections of the troubled Jamie, the truth and/or significance of events is never quite resolved.

The Darkening Sky is playing at Theatre Works, St Kilda until 26 March 2022