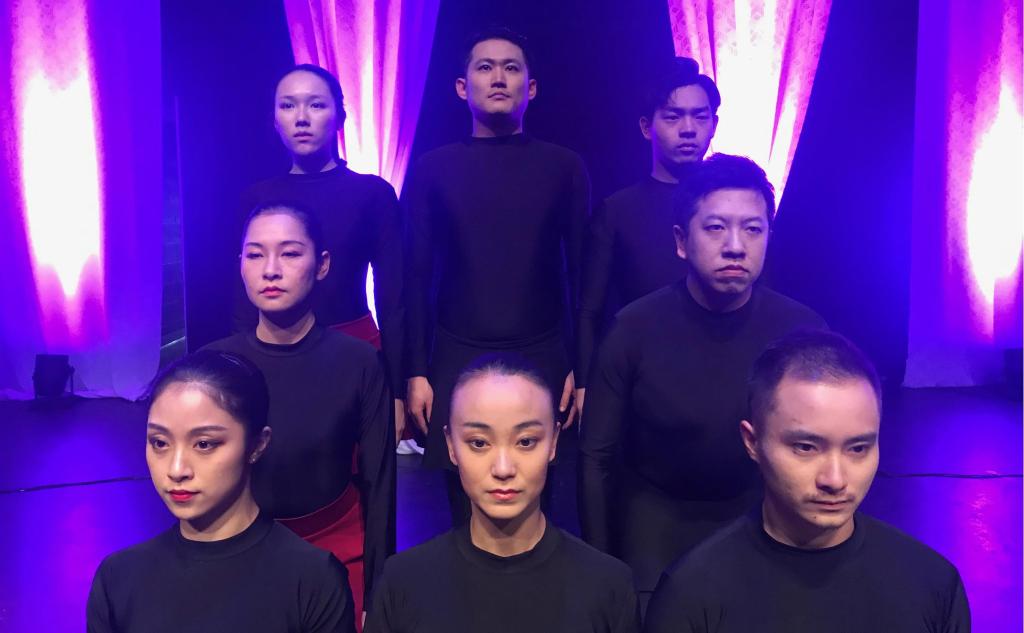 Part of the Sydney Fringe Festival and presented by the Australian Chinese Performing Artists’ Association, this is a highly philosophical dance piece asking some big questions about life, morality and one’s personal sense of identity, as well as one’s sense of self in a group situation. The production’s stated concept is to explore ‘how future imaginations may just be found in the present.’ It is also has elements of political comment.

The work is divided into five sections: Metamorphosis, That Revolving Dream, A Dream Rips, A Reverie and Returning to Symbiosis.

There are strong performances by the eight dancers and two actors, who appear to embody the ‘real world’. Though there are some parts in English, for those of us who do not speak Mandarin, the piece was a little abstract and challenging as most of the speech and songs are in Mandarin with no subtitles. At one point, the two actors appear and it is as if the dancers are statues at a waxworks, but the actors can apparently read the minds of the dancers. But then are the dancers putting on a façade to trick them? What is ‘real’?

The dancers wear soft ballet slippers – no pointe shoes – and black unitards with a short red skirt for the women and short black ‘apron’ for the men. The set design is very simple: tied back curtains at the back with snappy, atmospheric lighting. The soundtrack includes nature sounds such as storms and rain as well as the thudding of a heart and voiceovers, and a snippet of Beijing Opera (or Peking Opera).

Wendy Yu’s attractive choreography blends ballet (you could pick hints of allusions to Giselle and Swan Lake for example) with sinuous elements of contemporary dance, martial arts and Beijing Opera. At times the eight dancers had mini solos or duets; at other times they were a precisely controlled machine-like mass, with robotic arms, or forming two halves of a curved line joining in the middle. In one section, a couple in love are painfully separated. Sometimes the movements are undulating, full of feline grace, or stylized, and there is some repetition of strong group sections with the dancers slowly moving up and down vertically. At other times, they are like rocks on the floor or looming dreamlike figures. There are ecstatic fluid backbends, rolling and writhing, and beautiful balletic pas de deux as well as rather military, threatening movements.

The dreamer’s sense of self is strengthened and renewed at the end with a return to the opening sequence with the dancers as sleeping rocks or unawakened chrysalides, but this time there is perhaps a sense of hope when a  child in the front row of the audience runs and jumps over each of the dancers to a crackly recording of Frank Sinatra singing ‘I did it my way’.

A many layered, intriguing performance.