MELBOURNE INTERNATIONAL COMEDY FESTIVAL: Contemporary dance is ripe for satire, which is exactly what these UK choreographers turned comedians do – and brilliantly.
Richard Watts 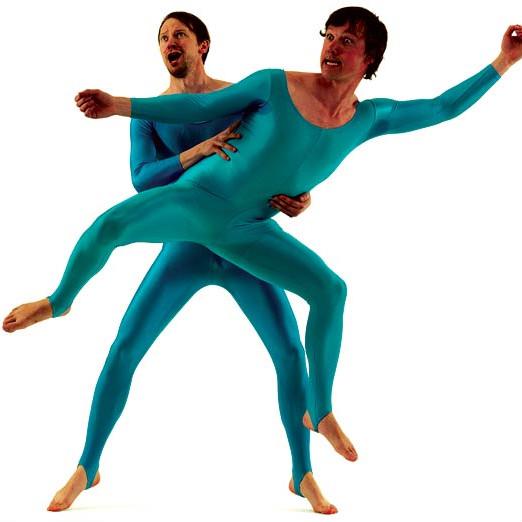 You don’t have to be familiar with contemporary dance to enjoy the hilarious satire performed by UK duo New Art Club (dancers/choreographers Tom Roden and Pete Shenton), but if you are, it’s sure to enrich what is already an excellent and engaging performance.

Both talented artists in their own right, for their first visit to Australia the duo once famously described as “Morecambe and Wise at Sadler’s Wells” are performing an award-winning ‘greatest hits’ package, Big Bag of Boom, comprised of the highlights of their ten year career to date.

The show sees Roden and Shenton creating “significant space” in a piece which successfully displays both their comedic talents and their poise and precision; utilising a simple form of audience participation (asking the audience to close and open their eyes when requested) in order to create a series of delightfully ridiculous tableau based around an urn and a plinth; and generating gales of laughter in a range of sketches which reference everything from an inspired Isadora Duncan at the Louvre to the violent actions of the IRA.

Not everyone will get the joke – on the night I saw them, an entire family sat stony-faced across the aisle from me, at one point looking around in bewilderment as if to try and spot what it was that everyone else was laughing at – but for audiences whose comedic tastes learn towards the absurd, New Art Club’s deranged folk dances with invisible children, colourful unitards, and inspired tributes to Australian icons are certain to have you in stitches.