A charmingly episodic romp through the Australian wilderness, Neville’s Island succeeds on the charisma of its enviable cast.
Glen Falkenstein
[This is archived content and may not display in the originally intended format.] 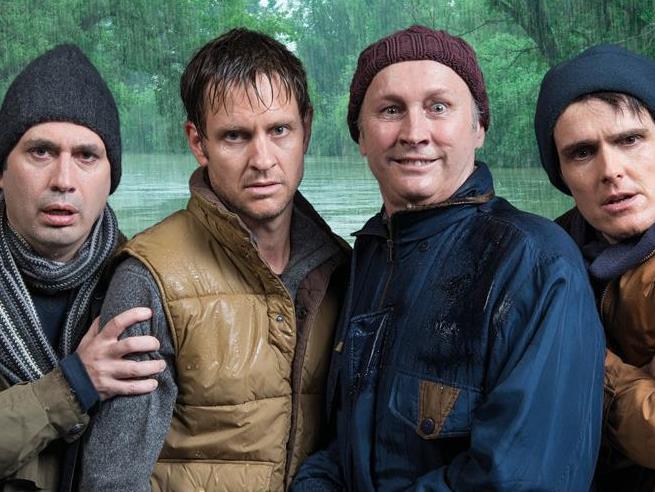 The cast of Neville’s Island. Image via Ensemble Theatre.

Stranded on an island, four friends have to make do with the precious little cargo fastened to their backs, together navigating a terrain terribly unfamiliar to the motley crew of businessmen from North Ryde. Not however a drama in the traditional sense, nor at all reminiscent of favourites such as Cast Away, the hapless lot in this case have been marooned so close to the Australian mainland that they can even see the ferries passing by.

Starring David Lynch as the eponymous Neville alongside Andrew Hansen, Craig Reucassel and Chris Taylor of Chaser fame, the four have banded together to adapt the play by Tim Firth, too a stalwart of the much-loved troupe, originally performed 25 years ago. The seasoned dynamic between the players no small factor in its appeal no ever unapparent in proceedings, the premise is mined for laughs by the practised group who also notably manage, sometimes in the same breath, to tackle heavier, more dramatic subjects, elevating what could otherwise have been an irreverent if frequently enjoyable comedy.

With Taylor delivering the most boisterous performance amongst the few, each bearing a fairly strong stage presence within the intimate setting, its Hansen who conversely proffers the more subdued role, awkwardly positioned in a corner of the stage and separate from his co-stars for much of the action, bereft of a few of the most memorable moments which best harnessed the group’s interplay.

A rucksack providing no end of props and gimmicks that will give any Gilligan’s Island fan a chuckle, Neville’s Island is most endearing when the play and its stars permit themselves to draw on the naturally amusing premise and elaborate on some of the group’s inherent tensions and fears outside the confines of one segment or scene, too frequently altogether switching tack to another sketch-type scenario.

While watching the stranded vie over a single sausage or take on what could be some very dangerous fauna is to no end amusing, the latter, serving as one of the play’s climactic hooks yet over just as quickly as the fracas started, among other moments begged a greater length to best leverage the natural and still greatly appealing comedic potential of the players and their premise.