This transcendent production will blow your mind.
Reuben Liversidge 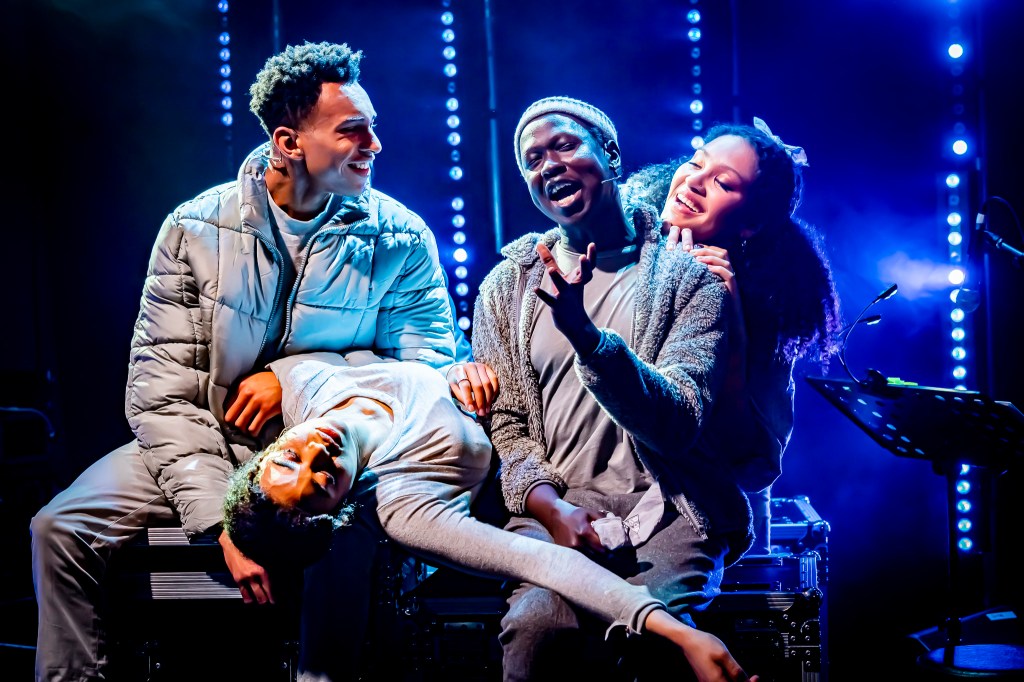 In an early scene in Passing Strange, the young protagonist sits in a smoky Amsterdam café soaking in the hedonistic atmosphere with wide-eyed wonderment. Another character asks, ‘How’s your mind?’ and he replies, ‘It’s blown; it’s a vibe I’ve never felt.’ That’s exactly how I felt after watching this production.

A hybrid of rock concert, musical and avant-garde art happening, this thrilling show takes a poetic and passionate look at the classic hero’s journey through the lens of a young African American artist. Loosely based on the life of the show’s author singer-songwriter Stew, the original, critically acclaimed Broadway production opened in 2008 and won numerous awards before being captured on film by none other than Spike Lee. Now, intrepid theatre company Antipodes have produced the Australian premiere of Passing Strange here in Melbourne at the intimate Meat Market Stables, which probably won’t have a roof left on it after the short run of this insanely enjoyable production is done.

Our narrator Stew (Augustin Tchantcho) sits with his band and takes us through the artistic awakening of his younger self (Grant Young) as he rejects his 1970s middle-class upbringing in LA and leaves his clingy mother (Sasha Hennequin) to head on a spiritual quest to Europe where he smokes weed, falls in love, and makes art. Through ridiculously melodic songs, quirky book scenes and soulful lyrics, he breaks though to ‘the real’ he has been seeking and discovers that there are some parts of your life you can never leave behind.

Passing Strange has cool written all over it. Director Dean Drieberg has helmed several brilliant productions, including Bare (StageArt) and Sunday in the Park with George (Watch This) and he was also recently appointed Resident Director of the Australian production of Hamilton. Drieberg’s work on that musical juggernaut has clearly paid off; the staging of his Passing Strange is striking in its pure theatrical simplicity. The cast inhabit their various characters with a real sense of joy, and they playfully interact with each other and the band throughout the performance. Different locations are skilfully created out of thin air and there are gorgeous pops of imaginative physicality throughout; many times, ‘the Youth’ seems both restrained and liberated by the ensemble around him. Drieberg also knows that the score is really the heart of this piece, and he ensures that the music constantly drives the staging and storytelling.

The cast are dressed in contemporary fashions in varying shades of grey with bright white sneakers and they look undeniably stylish. The lighting design maintains a flashy concert vibe while also transforming to suit particular settings, such as the glow of an Amsterdam spring. The awesome band takes its rightful place centre stage, led by the fabulous Marissa Saroca, and they attack the songs with skill and voracious energy. Passing Strange is a rock musical that legitimately rocks, and I couldn’t stop grooving in my seat the whole time. Unfortunately, the sound design was quite patchy; there were many missed lines of dialogue as a result and the cast background vocals often disappeared in the mix.

The cast are all fantastic and they bounce off each other beautifully. Tchantcho anchors the cast as Narrator/Stew, and he exudes warmth and passion. Young is charming as the adolescent version of Stew and Zahra Andrews has a stunning voice, and she imbues her different characters with humour and tons of heart. Sasha Hennequin is heartbreaking as Mother and Theo Williams’ deadpan delivery of his lines and smooth vocals are to die for.

Passing Strange tells a culturally specific story yet imbues the narrative with universal themes of the restlessness of youth, the transformative power of art and the deep emotional pull of family. This gloriously transcendent show is so much more than your average musical and Melbourne audiences should rush out immediately to experience this utterly captivating and unique theatrical event.

Passing Strange will be performed until 10 July 2022