A radiant after-dark wonderland set among the trees.
Thuy On 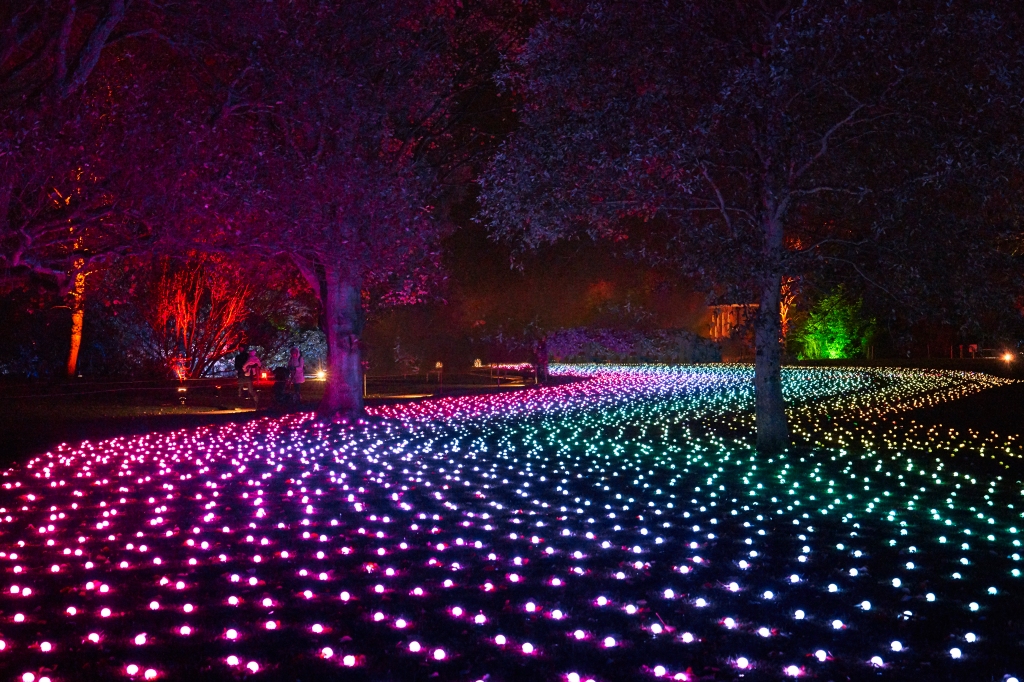 Long time citizens of Melbourne know of the city’s particular charms when dusk falls and the CBD is lit up with millions of light sources that reflect and refract across the Yarra, beam down from skycrapers, and glorify giant advertising billboards. The blinking headlights of cars beetling across the streets offer a sense of frenetic activity, of commerce and nightlife.

Not too far away, Melbourne’s Royal Botanic Gardens are lit up too: its trees, bushes and lakes resplendent in hues of an unnaturally neon glow. However, the mood that’s evoked here is otherworldly and magical. The Gardens are hosting the first Australian iteration of Lightscape, an event that made its debut in the UK, with successful seasons in the USA as well. It’s a family-friendly, full-senses immersive experience that evokes wonder and awe.

The Lightscape walkway comprises around 1.8km, which ensures a leisurely stroll of a bit over an hour to follow the trail in its entirety. Ambient music is softly played from loudspeakers at various intervals as you follow the track to see all manner of light illuminate the foliage: ribbons and streaks, firefly buzzes, lanterns, twisting vines that slide in the undergrowth. At times a gentle misty fog is also incorporated to add to the ethereal atmosphere.

There’s a field of enormous flowers of bright pink and orange that stand tall on blue stalks, laser technology gliding over a liquid sky, a lake dotted with hundreds of pulsating dots, canopies lit up in a kaleidoscope of colour, poppies elevated in the air, and in the large-scale ‘Winter Cathedral’ you can walk under a luminous archway made up of 100,000 tiny flower lights. There’s even an installation called the ‘Fibonacci Sequenced’.

Note: though there are some flashing lights involved, there is no strobe lighting used.

Lightscape seems a victim of its success however; despite organisers trying to stagger attendance times the crowd mills and swells in the hundreds. Ducking and weaving to be out of shot when phone cameras are held aloft at every step is a game in itself.

It’s difficult to contemplate the beauty of it all, to cultivate zen-like appreciation for a fairytale version of arboreal reality when there are so many people surging past all trying to do the same. Keeping everyone on the same pathway too is of course expedient and necessary, but it just means that you’re not able to wander off to the side, off the heavily beaten track, to admire the glowing vista from a quiet, secluded spot.

You also can’t stop wondering how the local fauna is coping with this radiant disruption to their nocturnal habits.

Lightscape
Royal Botanic Gardens Victoria in partnership with Sony Music Entertainment
Tickets: from $32
Entry via Observatory Gate near the Visitor Centre, opposite the Shrine of Remembrance

Lightscape will be installed at the Royal Botanic Gardens Melbourne until 7 August 2022.